Episode: s1, ep 12
This is the first episode where we see the potential and the danger of the holodeck, there is dressing up, including hats, so overall I'm happy.

What Happens:
The Enterprise is to make contact with an insect-like race who are very strict about protocol. Picard must address them flawlessly in their own language, otherwise the consequences will be dire. He grows weary of rehearsing so Troi sets up his favourite programme on the newly upgraded holodeck. Picard enters a programme set in 1940s San Francisco, based on the world of fictional gumshoe Dixon Hill, and is amazed by the level of detail. He invites Beverly, and fiction expert Whalen, to join him on his next trip and Data tags along.
The insect-race scan the Enterprise with something that causes a holodeck malfunction and traps the players inside. Riker must stall the impatient and hostile aliens while Geordi and Wesley try to fix the problem and release the Captain.

In the programme the crew members enjoy playing at being in 1940s America. In Dixon Hill's office they are confronted by a trigger-happy crook and a chatty mob boss who discusses ethics with them, for some reason. Whalen is shot and is actually dying, but the programme continues to run, the holodeck can't be opened from inside either. Picard tries to talk to the holodeck characters about the holodeck, which causes confusion. Wesley finally fixes the problem and the doors open. Whalen is rushed to sick bay and Picard goes to the bridge to successfully greet the aliens.


Picard Likes Old Stuff
Picard is a great fan of the Dixon Hill crime stories, and has been ever since he was a child.
When he first goes into the holodeck he acts as though he's never used one before -he doesn't dress up at all- even though this is apparently his favourite programme.
Within the programme Picard's main ally is Dixon's cop friend. At the end of the episode they share a goodbye scene (see episode title), after seeing the holodeck door the cop is concerned about how real he and his family are. It feels like this is meant to be a poignant scene, but since the viewers know the cop (and his family who we never see) aren't real from the start, it's very hard to care. It's a strange choice for the emotional core of the episode and doesn't work.


Does Not Compute
Data is intrigued by Picard’s description of Dixon Hill, especially after Geordi compares the character to Sherlock Holmes. (I don’t know why he’s supposed to be without emotions, most of what he says is motivated by curiosity. It’s probably like how Vulcans aren’t supposed to have emotions either, but yet they’re all smug.)
He joins the Captain and Whalen in the holodeck and plays the comic-relief as he quotes 1940s US slang (or at least colourful approximations of it) and the holodeck characters comment on how weird he looks. This is another opportunity for Data to wear a costume and a funny hat, and do amusing voices.


The Boy
Wesley has studied all the technical manuals for the holodeck, that’s how much fun he is. He offers to go with Riker to help Geordi with the malfunctioning holodeck. At first Riker wants to leave Wesley on the bridge (because his presence is so vital there?). Troi points out that Wesley’s mother is stuck too, so Riker relents. Wesley fiddles with the holodeck controls and has a solution, refreshingly Riker tells him to skip the technobabble. Wesley can try it, but apparently everyone inside could vanish if the programme aborts. Riker orders him to do it and -surprise, surprise- it works, albeit with a momentary interlude in an arctic storm.

Counselor Pointless
I think that Troi is also Picard's secretary. It actually explains why she has a chair next to him on the bridge, why she accompanies him to planets and meetings, and why she knows what his favourite holodeck program is and gets it ready for him.
So much suddenly makes more sense now.

Random Crew Members
Whelan is a fiction expert, as such he's a vital person to have on a star ship. He explains occasional things about the holodeck setting, and wanders around touching stuff.
It's no surprise that he gets shot, he had redshirt written all over him.


Holodeck Malfunction
This is the first holodeck-based episode and shows from the start how dangerous they are. Why no one designed them so that holo-bullets can't actually kill living people is beyond me.

After Whelan is shot Picard tries to explain about the holodeck, and the 'other world' beyond it, to the holodeck characters. Telling the guy pointing a gun at you that he isn't real is not a good move.
I don't understand how holodecks work. When the door opens at the end the characters can see it, even though there's no sign that it was visible to any characters earlier. After his first visit Picard has holo-lipstick on his face (prompting surprised looks from random crew members). At the end two characters actually manage to go out into the corridor, where they disintegrate from the feet up.
While investigating the malfunction Wesley claims that those inside could vanish if the programme is aborted. This makes no sense. Aborting the programme would just leave the real people, and since it’s not a transporter there’s nowhere they can go. Wesley doesn't even say that they'd die, which might make sense in VR that was interacting directly with their bodies or brains. He just claims that they'll vanish - to Narnia for all we know. It’s almost as though someone felt the stakes needed to be raised even more for all of 46 seconds.

Awkward Moment
There are 2 very weird moments between Captain Picard and Doctor Crusher. 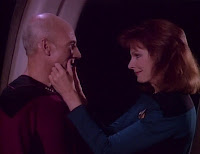 1. In a staff meeting Beverly lingers over wiping the holo-lipstick from Picard's cheek. He asks her to come with him to the holodeck next time, and for a moment it's a date. Then he says he'll bring Whalen along, because apparently Picard has utterly failed to notice the sexual tension while she was stroking his face. Her expression and tone make it clear that she is disappointed it isn't just the two of them. 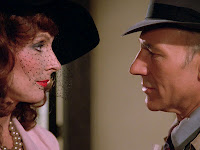 2. Picard is clearly impressed by Beverly's 1940s outfit, stop-in-your-tracks impressed. He says she 'wears it well'. They stand looking at each other for just a bit too long. Beverly asks to see Dixon's office and when Whalen and Data say they'll come along both she and Picard looked annoyed that the moment-killers are tagging along.

Whatever is going on here is weird. There's been no suggestion of tenderness between these characters before. In fact Picard has been dismissive of Beverly at times (in fairness he's like that with a lot of the crew) and treats her as nothing more than the wife of an old friend. The only previous time Crusher and Picard seemed to have anything physical between them was a strange scene in The Naked Now. Crusher catches the crazy-drunk infection and offers herself to Picard for a bit before presumably getting a hold of herself and returning to sickbay to find a cure. There was no chemistry in that scene and I assumed it was just Crusher succumbing to the illness.*

Staff Meetings: 1
In a meeting that’s supposed to be about the insect-people Picard spends most of the time raving about the holodecks and confusing people with references to weird, old Earth stuff, like automobiles. Then there is some brief infodumping about the insect-people situation.
Also Wesley is there, for some reason - meanwhile all the real Ensigns, who went through the Academy and actually spend their time working, loiter in the corridors with crowbars and lead piping.

Death by Space Misadventure
Whelan is shot. He lies on the holodeck-created floor as he loses blood and his pulse gets weaker. He’s dying by the time Data carries him to sickbay. The assumption seems to be that he survives, but no actual information is given.
If he died then Picard’s light-hearted “It was a nice place to visit ... but I wouldn't want to die there” line is in terrible bad taste.


The End
Picard successfully communicates with the insect-people, all is well and further contact can be established, everyone applauds. Data starts describing the holodeck adventure in typical noir voiceover style, and Picard stops him in that amiable-grump way of his. 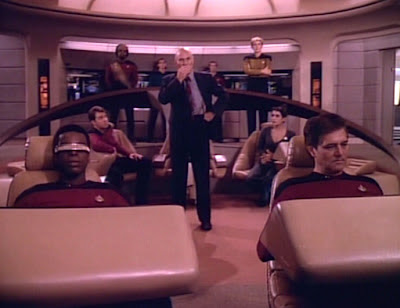 * I didn't mention it previously because the whole Data/Tasha train wreck blew it out of the water, though Crusher does partially unzip her top.
Posted by Catherine Hill at 09:36