My husband unexpectedly got me a boxset of Jonathan Creek for Christmas, which was a nice surprise.

Jonathan Creek is a mystery show with comedic elements that was first aired on the BBC in 1997.
Jonathan (played by Alan Davies) is a genius at lateral thinking and works as a trick designer for an egotistical magician. He gets drawn into various mysteries, at first by investigative journalist Madeline Magellan. The mysteries are intriguingly weird and sometimes seem impossible. Some of the comedic moments are also weird, or even absurd, and the chemistry between the main characters is good. 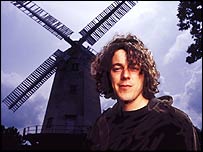 The Wrestler's Tomb
The episode features neither wrestlers nor tombs, but it is the name of the victim's home.

We meet Jonathan as a highly intelligent but awkward man who isn't much good with people or social cues. He manages to embarrass himself in front of Maddy, mostly due to not understanding someone with her personality. When it comes to problem solving he's much more comfortable and confident.

What's weird?
Hedley was shot in the chest in his bedroom during a botched burglary. His mistress, a French model called Francesca, was bound and gagged. Having done all this, the thief dropped the gun at the scene and then dropped the stolen jewels in the garden. It was similar to a previous robbery, besides the amateurish mistakes. The gun had fresh prints but they didn't match anyone involved. 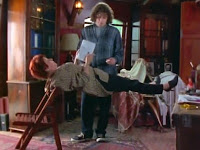 Maddy (played by Caroline Quentin) is a brilliant character and the perfect foil for reserved, repressed Jonathan. She asks the questions the audience want to know, and gets understandably frustrated when the answers don't come. She's forthright and determined and entirely confident in herself both personally and professionally. There should be more characters on TV like Maddy.
Maddy hears about the Shale murder via a police contact. She hacks into Francesca's answerphone (this is back when mobiles were brick-sized and phone hacking happened, but was less of a thing) and goes to Adam Klaus's show in order to meet her. Maddy gets talking to Francesca and eventually gets her side of the story. Maddy hears about Jonathan from Francesca and enlists his help. She poses as someone from Channel 4 in order to film Serena's office and later to get into her house.

Theories
Serena Shale had motive to kill her adulterous husband. She was alone in her high rise office between 9:30am and lunchtime, Hedley was killed around 11:30am. After Maddie and Jonathan investigate the office, Jonathan even makes a scale model and little puppets of Serena and her assistant to demonstrate how Serena could have gotten out of her office unseen. Of course it's all nonsense and entirely impractical, as Jonathan himself points out, the model seems to have been an intellectual exercise. 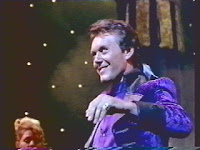 What's Adam up to?
Adam Klaus is a self-centred, egotistical magician and Jonathan's boss. In this series he's played by Anthony Head, with a bad US accent and a pony tail. Adam sees Francesca in the audience and gets Jonathan to guide her through a disappearing trick. He gets into a relationship with Francesca and she becomes his new assistant.

Spoilers and answers beneath the cut.

What Jonathan saw
Katrina, the Shale's cleaner, finds the body and the bound Francesca, on her way into the house she steps on the post that's lying on the doormat. If Hedley let Francesca in wouldn't he have picked up the post?
A portrait Hedley did of Francesca is found in her basement, riddled with bullet holes. There is an elastic band in the basement just as there was at the crime scene.
Katrina is very upset about the murder and Jonathan sees that the cleaner posed nude for Hedley, even though her husband is violently jealous.

Whodunit?
Francesca.
It turns out she was never Hedley's mistress, just a fame-hungry nude model who was rebuffed by him. Hedley was actually sleeping with his cleaner, Katrina.

Howdunit?
Francesca got into Hedley's room through the window and tied herself up with tape. She had learned to fire a gun using an elastic band and her foot. She had used her own portrait for target practice.


This first episode successfully sets up various themes of the series. Obviously there are the characters of Jonathan, Maddy and even Adam. There are some very odd images (Hedley's yellow nudes, Jonathan's face being vacuumed by a jealous husband) and humour created by situation rather than jokes or funny dialogue. The mystery is initially weird, but not so strange that there appears to be no answer, as happens in other episodes. The complexity and cynical calculation of the murder are about right for the tone of the show.
Posted by Catherine Hill at 17:15