Forests of the Heart

I've found it strangely hard to write about books recently, hence the lack of book posts. Sorry about that. I'm determined to get restarted though. 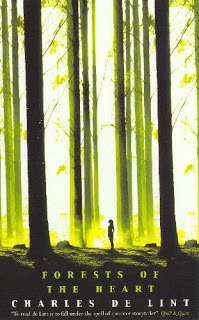 Bettina grew up near the desert and was taught magic by her beloved grandmother. She is drawn guided north and follows the signs to Newford, where she ends up modelling in an artist's colony. It is here that she sees los lobos, shadowy men who linger in the spaces between the human world and la epoca del mito (the spirit world).* Sculptor Ellie receives a strange commission from an eccentric and androgynous patron. As a natural sceptic she finds it hard to believe those who say she has mystical powers and is alarmed when spooky stuff starts happening. Irish siblings Miki and Donal have never been well off, but life is better than it was when they were kids and at least they have each other. That is until Donal falls in with a bad crowd and crosses a line Miki can't forgive.

This is the first full novel I've read of Charles de Lint. After reading a collection of his short stories I knew I wanted to read more of his work, it was so interesting the way he mixed mythology, magic and modern life. I'm pleased to say that Forests of the Heart did not disappoint. The story draws on both Irish and Mexican/Indian (as in Native American) mythology and brings them together in a snowbound town in the northern United States. The trajectory of the story was mostly as I expected, but there were a few unexpected twists and some minor characters who proved more significant than I first expected. Due to the nature of magic the characters' backgrounds and internal conflicts are as much part of the story as the external action and danger.

There's a fairly large cast of characters, as when as several viewpoint characters there are linked groups of friends and relatives. Every character feels realistic, even if some of the minor cast are painted in fairly broad strokes and others are referred to more than seen (I assume they feature more prominently in other Newford books). The main characters are nostly sympathetic, even when they're at odds. Even antagonistic characters feel fleshed out and have believable motivations, even if they aren't likeable or what they do is bad. The psychology of the viewpoint characters is very important, especially in the case of Bettina. She is given the most detailed back story and her personal issues are a focus of the story. It was interesting to read the juxtaposition of the snowy northern city and Bettina's powerful memories of the desert.

The book was particularly atmospheric because as I was reading it the UK was hit by the most snow it's had in decades. I saw the deepest snow I've ever seen in my life (except for the time I went up a mountain in Switzerland, but I wasn't in the snow then). Of course I realise that the weather we had this spring is nothing compared to proper blizzards and ice storms such as those described in the book, but still it felt fitting to read it at that time.


* I may have learned a very random selection of Mexican-Spanish words.
Posted by Catherine Hill at 21:02