I was hoping that an episode called Time Squared would be more interesting.

What Happens
The Enterprise comes across a powerless shuttle alone in the middle of space, with no indication as to how it got there. It's pulled into a cargo bay where Riker, Worf and Pulaski investigate. All the markings indicate it belongs to the Enterprise, but all the shuttles are accounted for. Inside is an unconscious Picard, even though they just left the Captain on the Bridge. Riker calls Picard and Data down to the cargo bay.

PicardA is unconscious and taken to sick bay. Troi  senses that PicardA is as much Picard as Picard1, but as he's unconscious she can't tell much more. Picard1 orders Pulaski to wake PicardA, but his brainwaves are out of phase and he can't remain conscious. Meanwhile Geordi and Data have trouble charging the shuttle, despite the connections being identical and idiot-proof (so idiot-proof that the Chief of Engineering was called). The charger is out of phase so they make adjustments and get enough power in the shuttle to extract the logs. In a staff meeting Geordi show the logs, which have footage of the Enterprise exploding while trapped in a swirly space-thingy. The timestamp indicates that this will have happened in about 3 hours time. No one understands. The plan is to simply continue and hope they don't make the same mistake again. 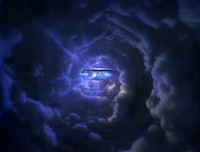 Pulaski belives that PicardA's bio-systems are out of phase because he's misplaced in time, and he'll get better the closer they get to the time he came from. Troi senses that he desperately wants to leave but probably doesn't know where he is. Pulaski thinks the whole thing is unhealthy and the Captain is under too much stress. 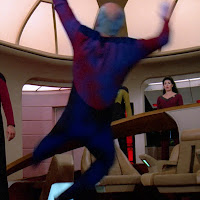 The ship wobbles, sirens blare, and a swirly space-thingy suddenly appears (as they seem to do). Its the same as the one from the shuttle cam. The ship is being pulled in and the engines are needed simply to stay in one place. At first Picard decides to stay and investigate, because poking at something that you know will cause an explosion is always a good idea. Racked with doubt he fears that any decision will be the wrong one; a probe is launched, it explodes. Geordi runs the engines nearly flat in order to remain stationery. Both Picards are shot by blue lightning (space lightning is always blue). Wherever Picard1 goes the blue lightning follows and Troi senses it's focusing on him. At this point he thinks that leaving the ship might help, but that's probably what PicardA thought too.
Picard1 goes to the sick bay where PicardA is awake but doesn't understand what's happening and apparently can't see his own double (for reasons I'll bet). PicardA is desperate to get on the shuttle so Picard1 has Pulaski release him and orders all the crew out of the cargo bay. The pair stride down corridors together and Picard1 speeches at his other self to find out what happened. PicardA believes the entity recognises him as the brain of the ship, which is why he/they are being targeted, he tried to leave in order to save the ship. Picard1 phasers his other self to stop the pattern, then orders the ship to fly straight into the vortex.* PicardA disappears and the Enterprise quickly arrives back in regular space. 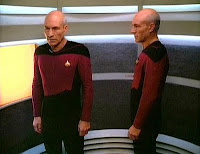 It is understandable that Picard1 is shocked and suspicious to see a timeslip version of himself. He also seems unreasonably irritated and gruff towards PicardA, who is clearly suffering. Even when he's sure that PicardA isn't a trick, he's still pretty interrogatory and mean to him. At one point he even shakes his other self by the shoulders, which seems inadvisable to say the least.
Picard's main issue seems to be that he is unused to doubt. Knowing that something he will or won't do causes the ship to explode leaves him in the uncomfortable and unfamiliar position of second guessing himself. Welcome to the life of a neurotic, Picard.

Before the theme tune Riker is cooking omlette, with real eggs and a whisk and everything. Data, Geordi, Pulaski and Worf arrive with gifts. Data points out that cooking is not a very efficient means of feeding yourself, Riker talks about cooking in terms of subtly, flair and individuality. It turns out Riker likes cooking because his father hated it and left it to him. Worf queries why his mother didn't do it because it's his understanding that "in most human families the woman shares in the cooking."** For someone who was raised by humans Worf's understanding seems a few centuries out of date. Riker reveals that his mother died when he was young (as it turns out this will be relevant to the next episode).
Everyone hates the omlette, besides Worf, who finds it delicious. It turns out Riker bought alien eggs at a starbase and either they've gone off or else that kind of egg is gross.

Counsellor Pointless
Troi claims she can't explain what she's sensing from PicardA, then explains it. She often prefaces statements about her empathic abilities with comments like this. It's not just her job to sense these things but also to communicate them to people who can't. Of course no one can tell whether she's just making excuses or not, but I'd be interested to see whether another empath would call her out on this.
When the swirly space-thingy appears Troi senses a mind but not an intent. There's always a mind behind these things, isn't there. Space seems to be full of bloody big brains just floating about the place.

Poor O'Brien
O'Brien is in the cargo bay when the two Picards arrive and witnesses Picard1 phasering PicardA. Seeing a man you respect shooting his other self is pretty alarming. Then O'Brien sees PicardA and the shuttle fade out of existence, without a guitar solo or anything.


Staff Meetings: 1
In the observation lounge Geordi plays the shuttle video log which is blurry because of phase shifting or something. The log shows a sad looking Riker, a swirly space-thingy and the Enterprise exploding. This will happen/has happened 3 hours and 19 minutes in the future.
No one can understand why the ship explodes nor why Picard would leave. Data refuses to theorise because he simply doesn't have enough info. Riker thinks the sequence of events is unavoidable, Worf mentions the mobius time-loop theory. Picard decides to keep going as normal and hope it's fine. Personally I would've thought that getting the hell out of dodge was a better idea.


Death by Space Misadventure
Technically everyone on the Enterprise, besides Picard, explodes in one time line. Then that Picard fades out of existance due to surprisingly dull timey-wimey stuff.

The End
Picard sits in the observation lounge and reflects on what just happened. Riker suggests it was a shared illusion, Picard thinks it was meant to happen. He does not recommend meeting yourself. 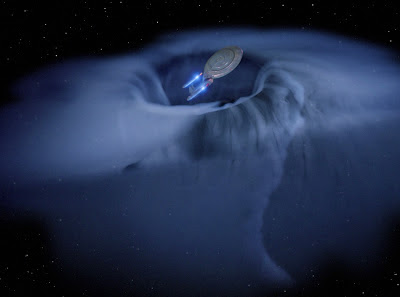 * Yes folks, the solution to this episode is actually a line from Star Trekkin'.

** FFS, I hate versions of the future where gender roles (among other societal things) are assumed to be entirely the same, or are portrayed very traditionally. Just for the record, in my human family the man does the cooking, mostly because he likes it and I'm not very good at it.
Posted by Catherine Hill at 09:36