Beverley Crusher is back! Wesley Crusher has normal, teen reactions. Dr Kelso tries to reduce the hospital budget by launching an egg into a space explosion (I think). Already an improvement on series 2.

Wesley oversleeps. The Enterprise is in a binary star system in time for a spectacular explosion. A scientist, Stubbs, is there to shoot some tech into the explosion, for science! The ship rocks about as the Enterprise is pulled towards the stars. Picard gives orders and Geordi does stuff, but the Computer insists there's no malfunction. The ship is made safe again, but sickbay is busy with minor injuries. More importantly, Dr Crusher is back! YAY! She notices that the food slot in sickbay is broken, but the Computer insists there's no malfunction. (Have you spotted the pattern yet?)
Beverley worries about Wesley. Stubbs tells the lad about the concept of wunderkind and the burden of fulfilling your potential. Red Alert sounds, a Borg vessel is detected, but can't be seen. It sounds bad but you can tell there isn't really a Borg attack because the music is wrong, its spooky rather than action-packed. Then the Computer starts reciting chess moves.
Stubbs insists his experiment must not be delayed. Geordi technobabbles about hotwiring the ship because the systems are disintegrating. Wesley is supposed to be in quarters, but he crawls around 10 Forward, setting traps. He tells Guinan he thinks the problems might be his fault, because of a nanite experiment he was doing that got loose. Big band music plays loudly across the ship, and Picard has to shut off the Bridge power to stop it. Stubbs is sad and angry about his experiment, and lectures Wesley about baseball and impatience. Beverley and Wesley have a real discussion about his responsibilities and her absence.
Beverley and Wesley explain about the nanites. Stubbs wants them killed so he can do his work and is deeply confused when crew members suggest they're an intelligence that shouldn't be destroyed. Picard tells Wesley to work with Data to remove them safely. Stubbs interrupts Data, Geordi and Wes to shoot at a section of Computer killing the nanites there. Horrible gas floods the Bridge. Data points out that Stubbs' actions prove intelligence, as they responded to his attack. Stubbs is confined to quarters, and Picard tells Data to find a way for them to communicate with the nanites. Troi talks to Stubbs, who is scornful of her touchy-feely approach. Later a console attacks Stubbs with blue lightning.
Data volunteers himself as a conduit so Picard can hold a peace conference. Picard speeches about peaceful co-existence and the nanites explain that they were exploring and meant no harm (which is convenient). Picard creates fellow feeling by saying that he's an explorer too. Stubbs is made to apologise for mass murder and the nanites agree to end the conflict. They don't need assistance anymore, they want to leave the ship as it's too confining. Data is returned unharmed. Stubbs sorts out a planet for the nanites and is successfully able to do... whatever it is.


Guest Star
Its young(er) Dr Kelso from Scrubs.
Ken Jenkins plays Dr Stubbs, a Star Fleet scientist who has spent his life working on an 'egg' that will do... something. Its very important that his experiment is launched in time for the solar explosion in this specific binary star system, because it only happens once every 196 years.
Stubbs is a man who has devoted his life to this experiment and he talks to Wesley about the pressure of being gifted and living up to the potential everyone sees in you.* In his spare time he likes to imagine long ago baseball games, because he's really good at stats and also patient, or something. He doesn't like Troi, because she's a counsellor or an empath, or both. He's entirely driven, to the point of arguing with the Captain and killing a load of nanites in order to force the crew to do things his way. In the end he has to apologise to the nanites for the killing, and I think he mostly means it, though I'm sure he's helped along by the fact that they tried to kill him back. In the end he uses his contacts to secure a world for them and does his egg and star experiment. (I was kinda hoping it might be something like the end of Futurama's Into the Wild Green Yonder, but it really wasn't.)

Oh Captain My Captain
Picard is happy to give professional praise about Wesley and compare the lad to his father, but is distinctly uncomfortable and uncertain when asked about Wesley having a personal life. Then again Picard doesn't seem like the kind of boss who wants to know about anyone's personal life, he's got captaining to do.
Picard makes clear that his first priority is not some guy's science experiment, it's the safety of the ship. It's not even like the experiment involves lost civilisations or fascinating ancient artifacts. It's the Captain's prerogative to endanger the ship for his interests, and his interests alone.
Picard tells Data to find a way for them to communicate with the nanites. Because how is Picard supposed to solve a problem unless he can make a speech at it? 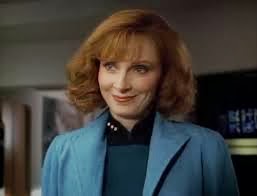 Dr Crusher is back! Hooray!!
No one mentions what happened to Pulaski, its probably not important. I respected Pulaski, but I didn't like her as much as Crusher. For all that she was shown to be compassionate, Pulaski would sometimes make a decision about whether or not people counted as human and wouldn't change her mind, like with Data and those clones.
Stubbs comments on the mother-son Crusher team and asks whether Wesley ever has fun. Beverley realises that after a year she doesn't really know the answer to that question. They clearly haven't bonded since she returned, Wesley is too polite with her, and she worries. She speaks to Picard about Wesley and both the Captain and the Doctor realise that they were getting into trouble at 17, and Wesley just doesn't. Beverley tries to talk to Wes about taking on too many responsibilities, and he confronts her about being away. (Well, its the TNG equivalent of a parent-teenager confrontation, there's no shouting or sarcasm and little anger.) Beverley offers her help and she tells the senior staff about the nanites.
At the end Beverley sees Wes with some brightly-dressed young people. Her worries assuaged, Beverley can adopt a mother role she's more comfortable with.

The show finally acknowledges that Wesley doesn't behave like a normal teenager and maybe that's a cause for concern. I suppose not having his mother around meant he was being raised by a group of people who are there in a professional capacity. There wasn't any family time and all the interactions we see are between Wes and adults. He's driven enough to aim for the Academy and since that's an area where all the officers could easily encourage him that's become the focus of his life. When Beverley suggests that he's taking too much on he's understandably annoyed. He's been doing so much, more than anyone expected, and yet he feels like he's facing criticism for that. It's also no surprise that Wesley throws his mother's absence back at her (though it was his choice to stay on the Enterprise). Of course -this being a utopian future with no interpersonal conflict- the anger and tension immediately dissipates. Beverley offers her help and Wesley accepts it. Still it was good that they had this scene.
Wesley effectively creates life (or intelligence) in this episode, but there's no smugness or superiority or people going on about how damn smart he is. There's just a mistake that goes badly wrong and needs to fixed. In a very normal teenage reaction he tries to sort it out himself in the hopes that no one will find out and he won't get into trouble. Initially he only confides in Guinan (who's outside Star Fleet and conventional adulthood), she points out that maybe he's been too smart for his own good, like Doctor Frankenstein.
At the end Wesley socialises with some other young people, the implication being that he does have friends, so that's alright then. 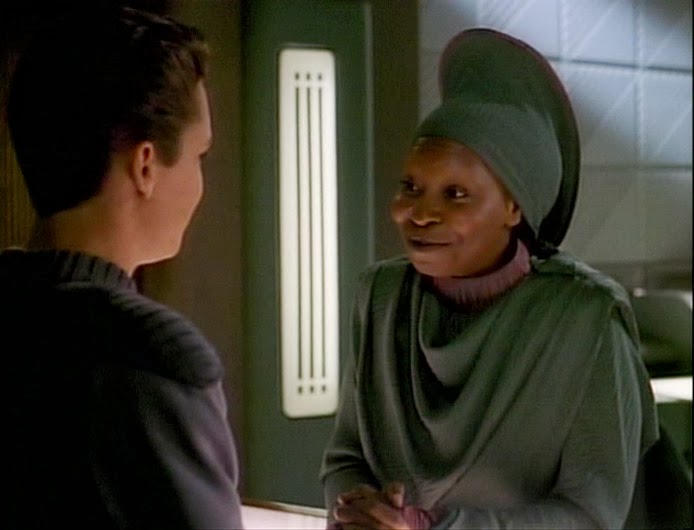 Guinan tells Wes that she's no good at being confined to quarters, as her husbands will attest. She asks about Wesley's problem and there's no suggestion that she'll report it to anyone. Guinan claims to have known Doctor Frankenstein, and I'll believe her because she's basically like a wiser, less-flashy combination of a Time Lord and a Jedi.
She also gets the best line:
Wesley: I always get an A.
(Wesley leaves)
Guinan: So did Doctor Frankenstein.

When talking to Dr Crusher at the end of the episode Guinan reveals that she's had lots of children, but only one she didn't relate to. It took several hundred years, but she managed to bring him round.


Security Breach
The ship is very vulnerable because they can't trust any external data or rely on weapons while there are so many system failures. In fact its a mercy that life-support isn't threatened.
Worf points out that allowing unknown creatures, who have shown an understanding of hostility, to basically possess/infect a Star Fleet Commander is a great threat. Everyone ignores him because they can't be bothered to run malware scans on androids. Plus by that point the nanites have already infected their entire environment, and its not like Data even has lasers or anything.

Staff Meetings: 2
1. Picard, Data and Riker go to the lounge to discuss the system-wide failures. Troi and Stubbs turn up, Stubbs wants a briefing because this is his only chance to do... whatever it is. Picard understands, but must ensure the safety of ship and crew. Stubbs would rather die than leave his experiment undone, he's also rude about Troi's empathy. Troi tells Picard how driven Stubbs is, though Picard had already figured that out.

2. Beverley tells Picard, Riker, Data and Stubbs about the nanites. Wesley explains that his nanites evolved, the computer hardware is their food and they've started multiplying, apparently evolving as they do. Stubbs suggests an exterminator. Beverley points out they're a collective intelligent, and Stubbs points out that she kills diseases, germs and other lifeforms all the time. Picard tells Wesley to work with Data to remove nanites safely, but stronger measures may be needed later.

Today's Lessons:
1. If something is meant to be kept in lab conditions don't take it to your room, otherwise you might accidentally endanger the lives everyone you know. Of course, if nothing really bad happens you probably won't be punished.
2. Don't stake your entire life on one thing, because if that doesn't pan out you'll probably go crazy.
3. Guinan: A mother shapes her child in ways she doesn't even realise. Sometimes just by listening.

The End
Beverley has a chat about motherhood with Guinan. She sees Wesley with his arm around a girl, in a group of young people and comments on how healthy that is. Then she asks Guinan who that girl is. 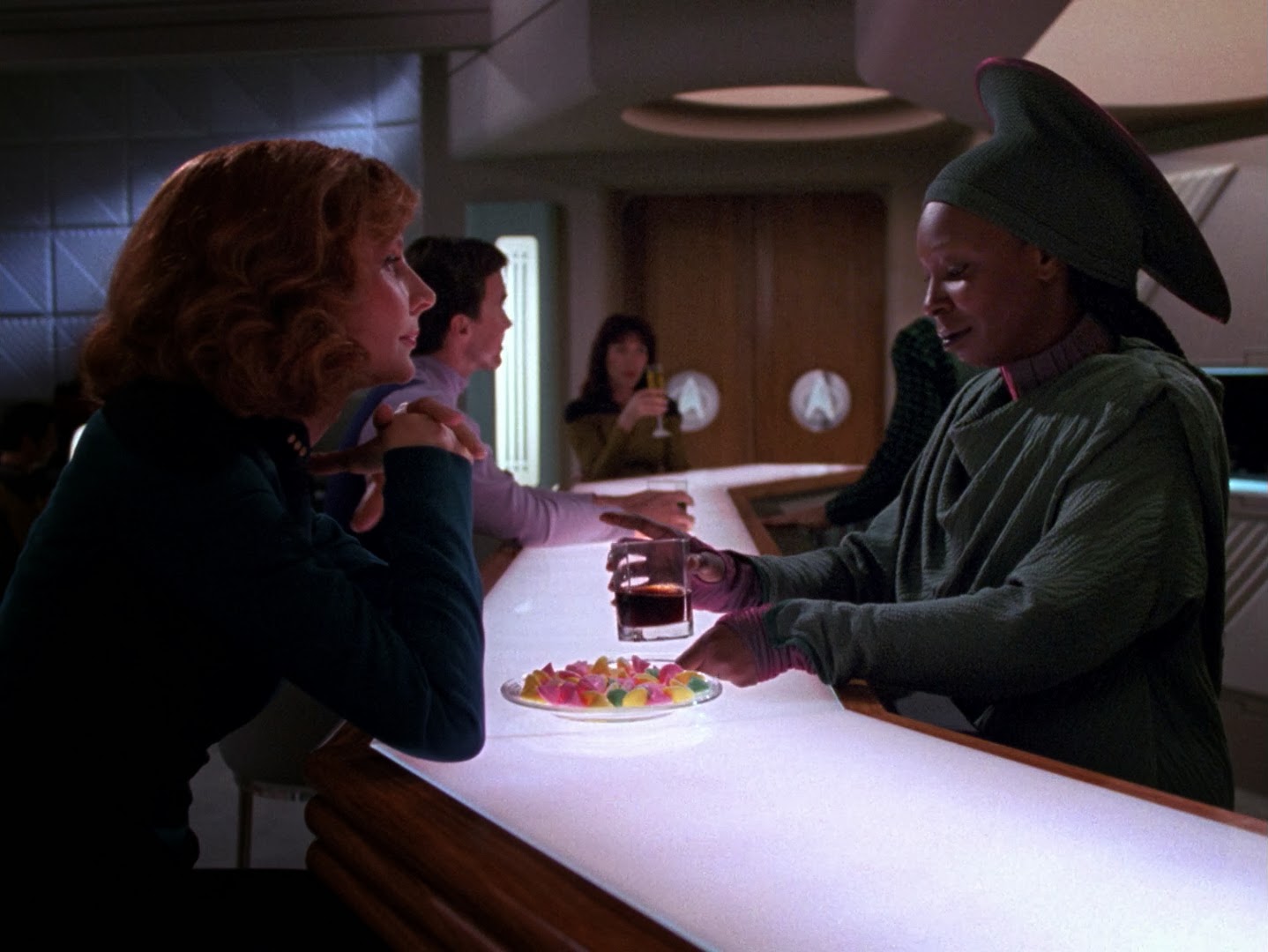 * Book recommendation: the subject of being a prodigy and the pressure that comes with that is a major theme of An Abundance of Katherines by John Green, which is a great YA book.
Posted by Catherine Hill at 16:36