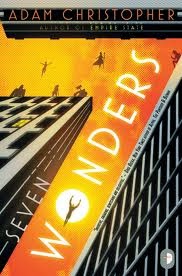 This story of superheroes and supervillains takes place in the fictional Californian city of San Ventura, home to the Cowl, the world's last supervillain. Standing against this menace are the Seven Wonders, the city's superhero team. However some of the citizens of the 'shining city' are not happy with this arrangement. Some are scared of the criminal mobs who claim to be doing the Cowl's work and make the streets unsafe, while some detectives in the city's police force can't help noticing that the Seven Wonders don't stop a lot of crime. The lives of some non-powered folks are going to change dramatically as they are pulled into the schemes of the super-powered and everyone in San Ventura and beyond must cope with coming changes.


This is a fun book that keeps the pace and action going throughout. There are twists and turns from the start, and while I saw some of them coming (I'm aware of superhero tropes) there are surprises even for the genre savvy. I found this book more enjoyable (and less confusing) than the author's previous novel Empire State, though I suspect that's because I'm more familiar with superhero stories than with noir. The main characters are well written, with the narrative giving a glimpse into the mindset of each. There are various shifts in alignment and its a testament to the author that these don't feel unlikely. The titular superhero group mostly aren't viewpoint characters and so they do feel a little flatter, though they are meant to be aloof during the start of the story so its no surprise we hear about them more than we see them. I particularly liked that two of the most dynamic characters in the book are women, and that they lead or steer the action quite a bit of the time. It's also cool that the motivations they are given are ones that are traditionally assigned to male characters in comic books.

The setting felt familiar in a good way, and by that I don't just mean San Ventura (I have never been to California), but the whole set up. It's a superhero world, albeit one with very few active superheroes, and it manages to blend the feel of different comic book traditions. There's almost a tussle between the clean-cut all-American comic book tradition of the super team's public face and the darker, seedier underbelly of supervillains, criminals and superheroic compromise. These different parts of this world exist together and there are also glimpses of the more mundane existence lived by the ordinary, unpowered folk. It is good that they aren't forgotten as some superhero stories tend to focus on blasting and punching as opposed to the concerns of normal life.

Seven Wonders is a fun, action-packed novel that doesn't skimp on characterisation or emotion.
Posted by Catherine Hill at 16:36