Sins of the Father

Apparently I have thoughts about Klingon culture and Worf's place in it. How did that happen? I'm a thoughtful person, and this show has sucked me in. Fear not, for I am aware that there plenty of ridiculous episodes (and films) in the future of this blog series.

A Klingon First Officer wants to take part in the exchange programme from A Matter of Honour, which saw Riker briefly serve on a Klingon ship. The new First Officer, Kurn, is quickly unpopular. He’s learned Starfleet regulations, and is imposing them with a Klingon sense of discipline and hierarchy. The only person he’s not being tough on is Worf, who is offended that he seems to be getting special treatment. Worf confronts Kurn and it turns out that he is Worf’s long-lost brother.

Their father is about to be denounced as a traitor because apparently he let in the Romulans who massacred and entire settlement (besides Worf). Kurn was only a baby at the time and was raised by family friends and not told his true parentage until he reached adulthood. As the eldest brother it is Worf’s place to challenge the verdict against their father and save the family honour. 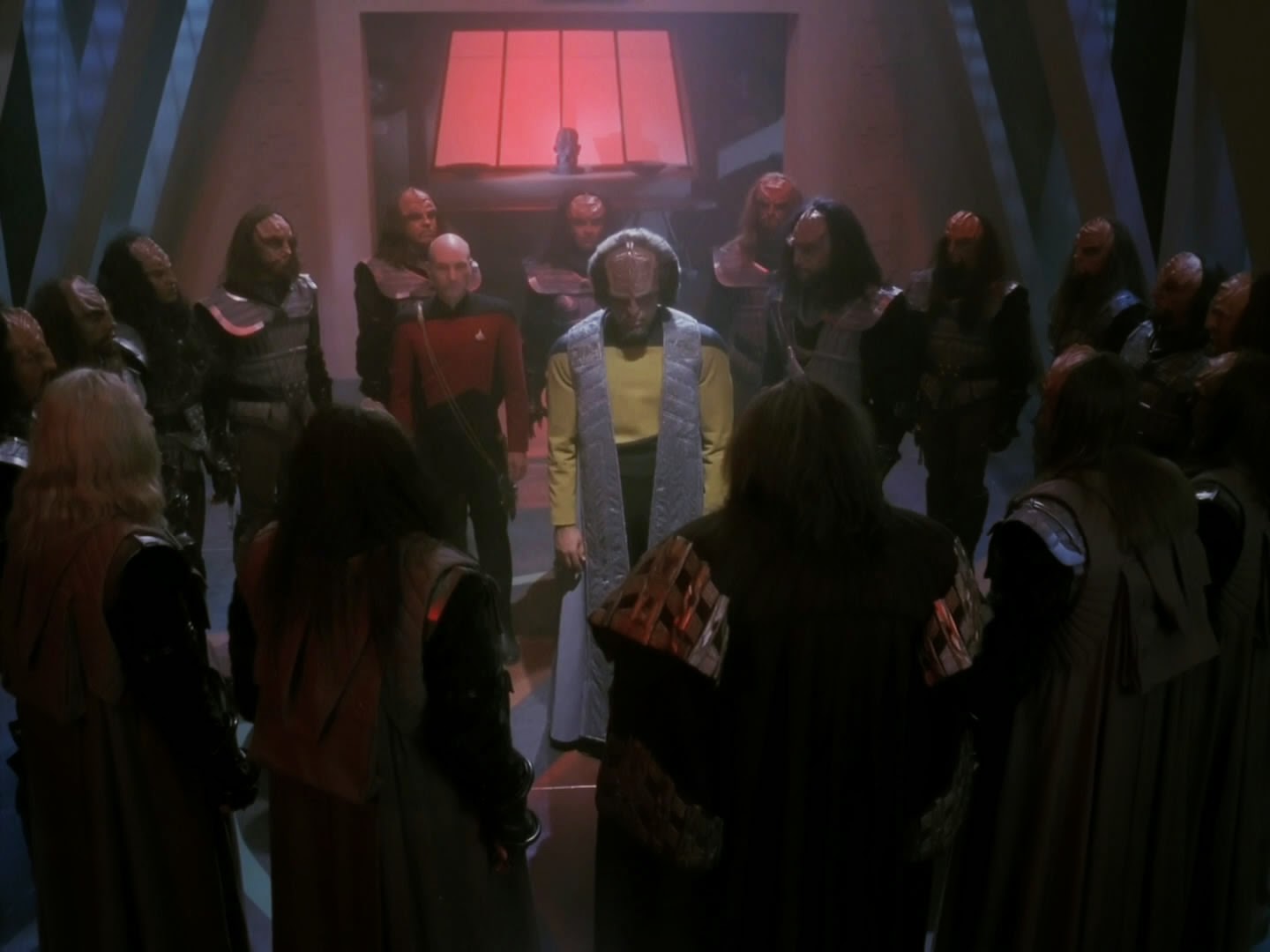 The Enterprise (having nothing better to do, it seems) brings the brothers to the Council. Kurn will be Worf’s second, but Worf forbids him from revealing they are related. The Klingon who brought the charges is particularly antagonistic towards Worf and the Council leader warns Worf to drop the challenge. Assassins are sent against Kurn, who is injured. Worf knows what’s happening is suspect and asks Picard to be his new second.

The Enterprise crew investigate the claims against Worf’s father. They discover Worf’s old nurse also survived the massacre, and is conveniently living in the city. Picard visits to convince her to reveal the truth. She initially refused, but after he is attacked outside her home she agrees to come to the Council. Worf and Picard tell the Council they have evidence and a private meeting is called. The Council leader reveals that they know that the antagonistic guy’s father actually let the Romulans in. His family is very influential and the accusation could cause civil war. For the good of the Empire they chose Worf’s father as scapegoat because Worf’s in the Federation and they didn’t know about Kurn. Worf at first seems ready to offer his life, but Picard is unwilling. Then Worf says that if he publicly accepts the dishonour they will achieve what they want, on condition that Kurn is safe and his true lineage is kept secret. Picard tells a disbelieving Kurn that Worf wants him safe now so they can restore their father’s honour another day.


Oh Captain My Captain
I suspect Picard is quietly amused by Kurn's command style and the crew's reaction to it. He says at a meal it's good to shake up the status quo sometimes. Of course it's easy to enjoy things being shook up if you aren't the one being shaken. 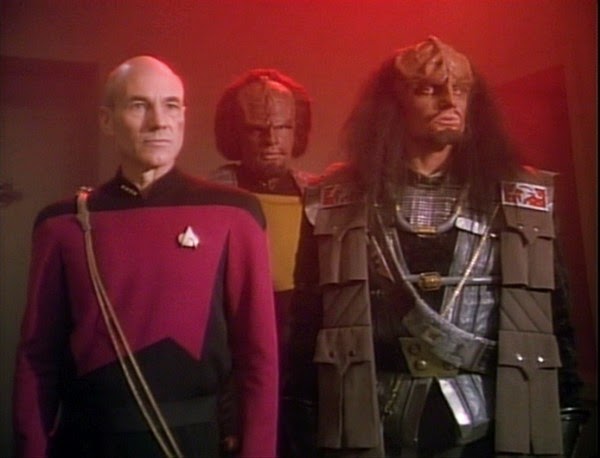 Picard stands by Worf a lot here. The Klingons are confused by his presence, though the Council leader respects Picard's defense of Worf's character, commendation from a senior officer is apparently a universally good thing. However there was a moment when it seemed as though the presence of a human could damage Worf's standing and I'm surprised that was not an issue, especially given Worf's background.
I was also surprised when Worf asked Picard to be his second (Klingon word??). Admittedly he has no other Klingon allies, but I honestly thought he'd have chosen Riker. Worf and Riker seem to get on better, Worf wanted to go with Riker if he changed ship, and Riker is always portrayed as more physical than Picard. Then again Picard shows he can handle himself in a fight when he's jumped by 2 Klingons. I'm kinda surprised he did so well. Not a judgement of Picard so much as what I've been led to believe about human and Klingon strength differentials.

Riker: adventurer, lover, middle-management
Riker is very much in his middle-management role here (even though he's been temporarily relieved of duty). Geordi and Wesley complain to him about Kurn. Riker's job is to be the approachable face of the senior officers (and probably do some admin we never see). Picard kinda indicated this in the first episode, though he also suggested Riker should run interference when the Captain was faced with children. So Riker is the one who hears about Kurn's surprise inspections, altered the shifts in Engineering, and him being too hard on everyone but Worf. Riker is persuaded to have a word, and tries to draw comparison with his own time on a Klingon ship. Kurn doesn't take kindly to suggestions, but does refrain from killing him, as is the Starfleet way.

Klingon Warrior
Initially Worf is angry that the exchange-First Officer is apparently going easy on him and being strangely polite. It isn't the Klingon way and so Worf is insulted. When Worf physically displays his anger Kurn believes he is truly a Klingon, there was doubt as he was raised by humans and is in Starfleet. Again we are reminded that Worf is restraining himself most of the time, and that he is very distanced from his own people. Then Worf is offended that his brother deceived everyone in order to inspect him before telling him the truth. This is an expected response, but Kurn explains that was because of the challenge, and presumably Kurn's secret parentage.
Again we see the importance of honour and combat in Klingon society. Even though Kurn is living as a member of a different house and Worf is essentially separated from Klingon society both want to ensure their father and family's honour is protected. Worf takes action even though it could mean his death, and nearly does. I was actually surprised that everything wasn't trial by combat. I guess I'd been swayed by the stereotypical view of Klingons we're normally presented with (you know, as people who will kill others for offering a suggestion). There was a fair bit of talking, investigation and negotiation (the kind of thing TNG normally does, in fact) and the fighting that took place was covert and so presumably with honour. Though it is acknowledged that the entire situation is very dishonourable. I suspect that Klingon society values the appearance of honour more than actual adherence to it, that's certainly what's going on here. Just as I'm sure a lot of what they say about killing people in social situations is big talk (even if they do have the ability to back it up).

I've wondered before if Worf keeps his distance from his own people and culture because of uncertainty about how he will fit in. Now I think there may be an element of disillusionment, or fear of disillusionment, that drives him. He accepts the taint of a traitorous father in order to spare his brother's life. When the Council publicly turn their back on him it feels a little as though Worf is turning his back on them. He's spent his life being part of Klingon culture only on a personal level, admiring and upholding the ways of his people from afar, because he was usually the only Klingon around. On a personal level he knows that his honour is secure, and he's done the best thing for his family and for the Empire.

Not-actually-an-Ensign
Kurn refers to Wesley as Acting-Ensign, which is more correct than when anyone else calls him Ensign. Perhaps it shouldn't really matter, but every time Picard calls Wesley Ensign I just think how unfair it is on all the actual Ensigns. You know the ones who did the tests and went through the Academy. They can't help it if their parents aren't friends with the captain and their mothers aren't the ship's doctor. There's no indication of how often any of them get to fly the ship. You'd hope they get a chance on the other shift(s) that we don't see, but even then they don't get so much chance to work with the Captain. It just seems like if you're going to have a military style hierarchy you should stick to that. Then again I'm sure there are plenty of examples of nepotism in militaries throughout history.
Wesley is unused to being commanded by someone who doesn't like him.


The End
Worf accepts the dishonour of his father's fake-treachery in a ceremony in which the Council members cross their arms and turn their backs on him. Kurn is reluctant to do it, but Worf urges him to. Kurn turns his back. Worf and Picard resolutely walk out of the hall. 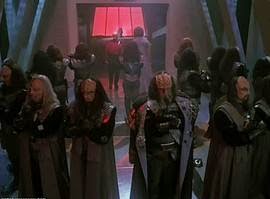