I want to like Lwaxana Troi, she seems to have agency, isn't embarrassed by her sexuality and is a fun character. Unfortunately the show uses her really badly, so I can't enjoy most of her episodes. 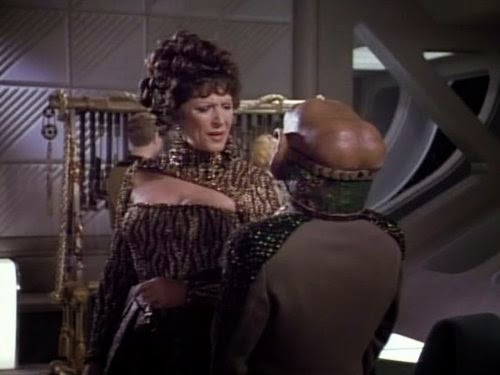 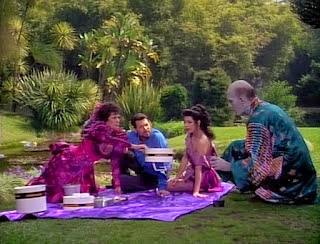 The Enterprise holds a reception after a Betazed shindig, which includes Ferengis. We are reminded the Picard does not approve of Ferengis. The Betazeds (being more reasonable than Picard) invited them even though they can't read Ferengi minds. Pssst! This will be important later! A Ferengi captain is attracted to Lwaxana Troi for her good looks and telepathic abilities. He hits on her, she loudly rebuffs him. Deanna is embarrassed by her mother's behaviour* and irritated by motherly meddling. Riker beats a Ferengi at 3D chess, and his opponent claims the alien music distracted him. Wesley scoffs at the Ferengi's lack of musical appreciation. It is one of those parties.

Wesley is to attend the Academy and has to get a ride to the oral exams. Instead of staying on the planet to get his ship he goes with the Enterprise to do something dull that puts them out of comms range. Riker and Deanna take shore leave together and kiss, but they're interrupted by Lwaxana Troi: moment killer! Then the Ferengi captain returns to proposition Lwaxana again. She refuses, so he kidnaps all 3 of them. The Enterprise returns to the planet so Wesley can leave. They're told about the disappearance and start searching. Wesley stays to help, but after a while Picard tells him to leave as he's delaying the transport ship. While his mother is trying to say goodbye to him Wesley ignores her as he realises that the static was in the pattern of the music from the party. He races to the Bridge to tell them what he's realised and misses the last bus to the Academy. The Enterprise follows the trail to the Ferengi ship.
Deanna and Riker find Lwaxana just as the Ferengis are going to painfully scan her brain. Lwaxana bargains for Deanna's safe return, and in exchange she'll give herself to the Ferengi. The deal is struck just before the Enterprise arrives. Deanna and Riker are beamed to safety. Deanna tells Picard what her mother did for her and convinces him to save Lwaxana by acting like a jealous ex. He tries to act like he loves her, then uses lines of the poetry he likes so much. He pretends that he'll destroy the Ferengi ship unless Lwaxana is returned to him. The ruse works and the Ferengi captain is scared off.
Picard calls Wesley to his office and, since he can't attend the Academy until next year, promotes him to full Ensign. Looks like he's not going anywhere.


Oh Captain My Captain
The Captain of the Federation flagship remarks that he's surprised the Ferengis were able to behave - to the diplomat who invited them to the shindig in the first place. Assuming others share your prejudices is not very diplomatic, Picard. 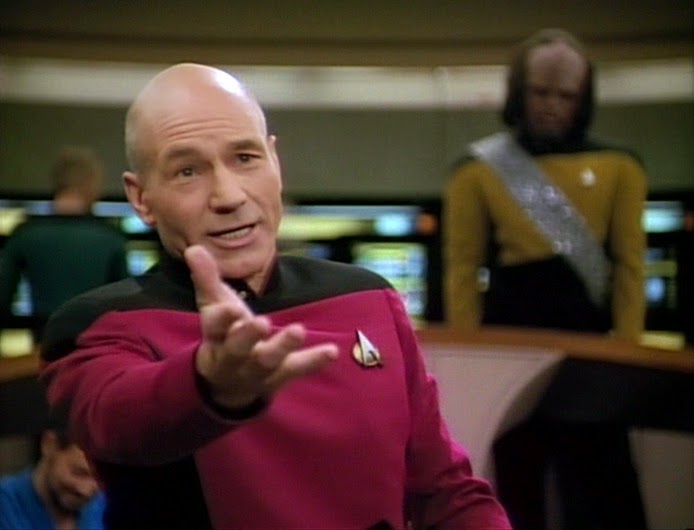 This is the episode where this meme comes from, this meme is everywhere. Picard is persuaded by Deanna to pretend he's possessively in love with Lwaxana in order to save her from being stuck with the Ferengi. It's always funny to see good actors doing terrible in-character acting. Picard realises he can use the words of Shakespeare and Tennyson to express his feigned feelings, and does properly massive Shakespearean dialogue, the kind that fills a theatre and overwhelms a TV screen. It's hammy as anything and hilarious.
Picard promotes Wesley so he doesn't feel bad about missing the Academy admission. When this news gets out Wesley should probably steer clear of being alone in lifts and corridors with Ensigns who actually bothered to go to the Academy and worked hard to earn their place on the flagship.

Riker: lover, adventurer, middle-management
Proving his mastery over games Riker easily beats a Ferengi guest at 3D chess, and is insufferable about it. He's also smugly amused by Deanna having issues with her mother - even though the Trois are way more functional than his crappy relationship with his father.
I'm not sure why Riker is beamed away by the Ferengis, probably because he's a witness. He doesn't seem too worried about his fellow captives being beamed away without their clothes. He uses his previously established chess prowess to escape from the cell (because that's a use for chess).

It's Not Easy Being Troi
Despite telepathy Lwaxana doesn't seem to realise how much she irritates her daughter, or possibly she isn't bothered. Deanna doesn't want motherly lectures on finding a man and settling down when she's happy and fulfilled by her work. She's also fed up of her mother treating her like a child, which is fair enough. 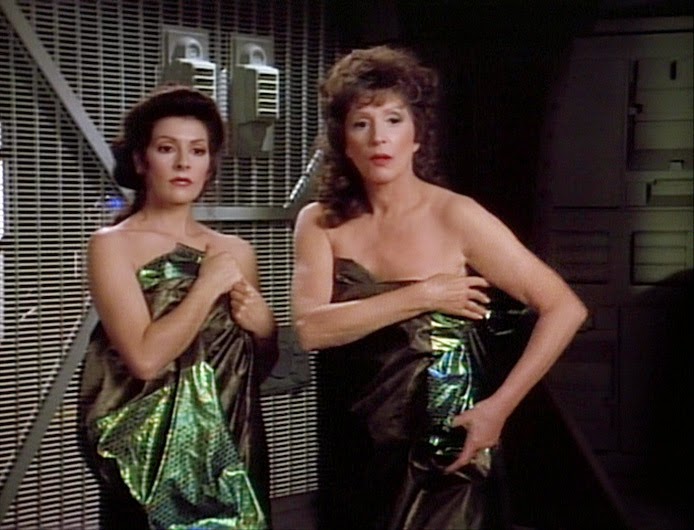 There's a confusing moment between Deanna and Riker, well I'm confused even if they aren't. Revisiting somewhere they went when they were dating, they kiss - even though Deanna insisted to her mother that they were just good friends now. Was that true? Is a thing exes do? I honestly don't know. Before we can find out what's happening Lwaxana turns up and interrupts with a picnic. Then the Ferengi Captain turns up and interrupts with kidnapping.

The Ferengis force the Trois to be nude (which may be a part of Betazed culture, but is bad if you don't get a choice). Deanna is sent back to the cell, but then she has to stay in telepathic contact with her mother while she seduces their captor. Deanna doesn't seem squicked out by this, so I assume this is another area where their culture is fairly open, but it's still a horrible situation. Lwaxana sacrifices her freedom to save her daughter, and as soon as she's escaped Deanna gets Picard to help free her mother.

I'm very sorry I was not able to attend the oral entrance exam, and therefore missed my chance of attending Starfleet Academy this year. I missed the very last ship from Betazed because the First Officer of the Enterprise had been kidnapped by some Ferengis along with the ship's Counsellor and her mother (who is an Ambassador). I was about to beam over to catch my lift, when I realised that the First Officer had sent a coded message in static leading us to his position. It is not unusual for me to be the one who solves problems like this, even though the Second Officer is an android.

I officially request to defer my entry to Starfleet Academy until next year. I will ensure that I am in a position to get to the Academy in good time for the entrance exams, and won't rely on last minute transport. I have been told by my fellow crew (I've been working aboard the Enterprise for a few years now) that I might not be assigned to the Enterprise when I graduate. I'm confident, given all my experience on the ship, that I will be most qualified for that assignment. Plus I'm sure that Captain Picard will request me. He's just promoted me to Ensign, so he's well aware of my value as a crewmember.


Transporter Magic
The Trois and Riker arrive in the Ferengi brig unconscious, meaning the transporters have a setting that puts people to sleep when they're beamed. Is this something only the Ferengi have? Is it something the Federation could do, but are too principled to try?

The End
Lwaxana is sent home offscreen. Wesley comes in wearing his new red uniform. I don't know what tone this is meant to be striking, but Wesley sure is happy. 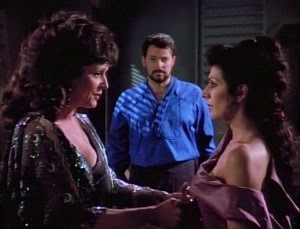 * As an Ambassador Lwaxana could have been more diplomatic about rebuffing the Ferengi, but on the other hand he suggested he could buy her, which seems to be unacceptable in her culture.
Posted by Catherine Hill at 16:36