What Happens
Coulson is at the Hub monitoring the few Shield bases that haven't been compromised by Hydra. He's contacted by a US general who is coming to the Hub, knowing that this will likely mean either death, imprisonment or legal troubles Coulson takes his team away. Agent Triplett asks to come along and Coulson is wary until Simmons vouches for him. In the air Coulson instructs Skye to erase everyone's identity from official sources. Skye calls Ward to tell him this, unaware of his true allegiance. He and Garrett have Hydra agents break Raina out of prison. Though she's disappointed to learn Garrett isn't truly psychic Raina agrees to continue with Centipede using the Shield team's info fon Skye's hard drive and the drugs recovered from the Guest House. Ward and Garrett go to raid the fridge, managing to get inside only after a helicopter shoots at them. They kill the guards, release the powered prisoners and take the dangerous objects, including the stuff that was supposed to have been sent into space as part of the Slingshot programme. Ward leads Garrett to the confiscated gravitonium. Skye takes everyone's Shield badges and notices Coulson's has lights on it spelling out coordinates. He's convinced it's orders from Fury and has them fly there, even though everyone else thinks it's a trap. May tells Coulson she's worried that Hydra might be able to control him because they don't know who was running project Tahiti when he was resurrected, they might have implanted more than fake memories. Coulson is still angry at her and refuses to listen. They land in snowy, Canadian wilderness and trek to an empty-looking place where Coulson breaks down a little before they find Fury's secret base. Here the only occupant, Agent Eric Koenig, tells them Fury is dead and the Fridge has been taken by Hydra.  Then he takes Coulson aside and tells him the Director is alive, but he doesn't want many people to know. Agent Koenig shows the team the well-appointed base, which he calls Providence, but he's suspicious of everyone except Coulson. Raina tells Ward and Garrett that Skye has encrypted the hard drive so only she can unlock it. Garrett sends Ward out to get her, he can either persuade her to decrypt it as part of his cover, or he can kill the team and force her. Garrett beats Ward up to make his story look convincing. Ward arrives at Providence and is allowed inside. Garrett and Raina tell an angry Ian Quinn that his imprisonment was necessary, Quinn is ready to abandon the operation, but Garrett gives him back the gravitonium. 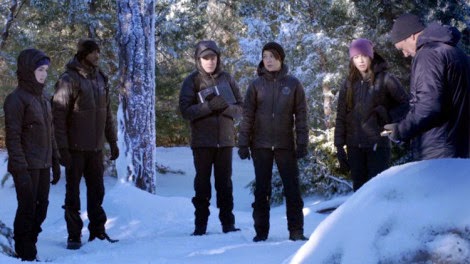 Coulson's Alive!
Coulson is trying to figure out Shield's status from the Hub, only a few Shield bases aren't compromised by Hydra and the media is reporting the falling helicarriers at the Triskelion and the intelligence broadcast by Black Widow. Coulson plays very affable with General Talbot, but gets ready to run, even though he doesn't know where. It's better to avoid detection and try to keep fighting Hydra than get caught up by the US Government. When the coordinates appear on his badge Coulson is convinced Fury is alive and sending him a message, despite everyone else's scepticism. He's still angry at May for her betrayal and refuses to surrender his weapon or position to her. He's alarmed to discover that someone besides Fury had control of the Tahiti project, and angry May can't tell him more. He refuses May's claim that he might be controlled by Hydra or leading them into a trap. Using the last of the plane's fuel to get to the coordinates he tells the team that they can leave if they want, but he's in no doubt about what he's doing. When they reach the place and it seems empty he starts ranting that S.H.I.E.L.D. ID still relevant, still needed. This is probably a reaction he's been suppressing a while. He throws his badge, which activates a machine gun turret, proving they've found something. Turns out Coulson's been expected and it's a good thing as he was close to breaking point. Within the base Coulson questions Koenig's insistence on secrecy, he doesn't want to lie to his team (there's been too much of that) but agrees as it's Fury's order.

The Cavalry
May questions Coulson's mental state as it's been her mission all along to look out for him. Now she knows Hydra had infiltrated Shield she questions whether Phil has been compromised. They know his memories have been altered and while Fury ordered the procedure she knows he wasn't running the project, but doesn't know who was. She stays professional in the face of Coulson's anger, though their broken friendship is painful to her. Later she tells Skye that she'd seen nothing odd in Coulson until his insistence on blindly following the coordinates.

Grr, Ward
Garrett comments that the 'straight' (he doesn't seem to be talking about sexuality) version of Ward is very different to the real him and that the transformation was something he doubts Black Widow could do. I don't think Ward seems especially different, more outgoing and talkative, with more of an edge, but mostly just more evil. He talks about Raina about how he won everyone's trust; saving Simmons early helped, beng SKye's SO meant he could talk to her easily, and his reluctance to do team work was what encouraged Coulson to recruit him. His biggest threat was May so the sexual relationship working to disarm her, though when Raina comments he doesn't seem like May's type Ward says he's everyone's type. Hmm, he's still arrogant and irritating and even though being evil makes him more interesting it doesn't improve his personality. It's clear that Ward really does have feelings for Skye and is angry at Garrett for having her shot. It wasn't part of the original plan, but Garrett didn't know how ignorant Coulson was about what happened to him and had to improvise. Garrett isn't bothered that Ward likes Skye, his jovial, edgy, jokey personality is no different when he's being evil. He tells Ward that if he can get Skye to decrypt the hard drive without blowing his cover that's fine, giving him an opportunity to further woo Skye, but equally Garrett expects him to kill the entire team if needed. Ward tells Raina he admires Coulson, but he owes Garrett everything.

Science Hermione
Simmons questions whether they have orders any more, as there's no one higher than Coulson around and Shield is now listed as a terrorist organisation. She's concerned by the sudden lack of structure, but also willing to think it through. Coulson suspects Trip because he worked with Garrett for a long time, though Trip argues that he was a s fooled as anyone. It is only once Simmons vouches for Trip that he's allowed to stay onboard, but Coulson makes clear he's her responsibility. Simmons understands Fitz's loyalty to Coulson, but also sees Trip's point that they can't just blindly follow orders. She worries about Coulson's state of mind and whether they're heading into danger. When Fitz says he doesn't want anything to change Simmons points out it's too late for that.

Monkey Boy
Fitz is grumpy and snappish at Trip, echoing Coulson's distrust, but for more personal reasons. He still wants to have orders and puts all his trust in Coulson, even when his orders don't make sense. He seeks reassurance from Simmons that they still have each other and she vouches for that, but she cannot encourage him in his fear of change.

Hacker Girl
Former-hacktivist Skye sees the intel Black Widow released and admits that her ideal of all the info being free is scary now it's happened and she's aware that it's not being protected. She agrees with running, it's clear General Talbot does not have warm intentions towards them. She's shocked that Coulson wants everyone's identities erased, it's an extreme option. Giving her badge to Coulson makes her wistful as she'd only just become part of Shield and now it's broken, though she acknowledges the culture shock for Coulson must be huge. She worries about Coulson and questions his plan, then worries about Ward when she hears the Fridge has fallen to Hydra. When Ward arrives at the Providence base she's shocked by his injuries and immediately tends to him, the romantic tension between them back, but at least made more interesting by Ward's hidden motives.

Weirdness of the Week
The Fridge contains all the powered people Shield takes in (those too dangerous/evil to just be monitored as part of the Index) and all the artefacts it finds. Turns out the Slingshot programme was a fake, not by Hydra but by Fury, so there's a lot more dangerous stuff there than most think. Including the 0-8-4 particle beam and the Asgardian staff from The Well (which Ward handles with gloves). Garrett mentions bringing in someone who gave himself lion's paws instead of hands, a weird aside. Ward reveals that the Gravitonium from The Asset is hidden in a secret sub-basement. 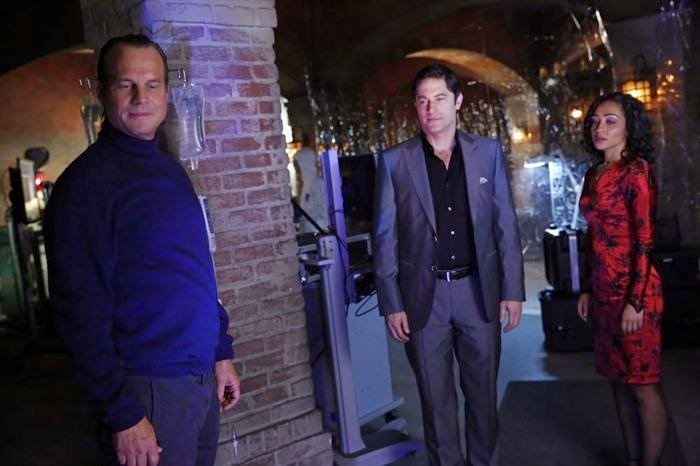 Villains of the Week
Evil Garrett is the same as regular Garrett, but more irreverent and honest. He handles Raina's disappointment well, praising her work so far and pricking her interest in what comes. It's kind of nice that Raina has decorated her cell with origami and that when Garrett has her broken out he also gives her a flower dress (one of her own?) as a present. Quinn is really angry at all that Garrett has cost him, especially as his life was full of luxury before. Turns out Quinn probably did know who Garrett was while he was interrogating him. His rich man's anger is completely dissolved when his gravitonium is returned to him, showing he was interested in more than just getting richer.

SHIELD LOL
Not an episode full of jokes, but there's light moments amid the action. Koenig is a great character, kind of officious with everyone else but slightly adorable in his pride about the cool base when he drops his guard with Coulson.

It's A Spoilery Place (this series and series 2)

May's concerns about an unknown agent/operative messing with Coulson's head makes sense. Soon both she and Coulson will discover that the mysterious individual is actually Coulson himself.

Raina's disappointment about Garrett's lack of psychic powers is because she wanted to ask what she will become - I want to know that too. Come back series 2!

Ward says he's thinking of letting his facial hair grow out, will we see beardy Ward in series 2, though that's because they won't let him have sharp implements.

My thanks to @AlasdairStuart and @runalongwomble for the spoiler pun suggestions.
Posted by Catherine Hill at 16:36