I have no idea what the title of this episode stands for, or why it's an abbreviation. It is a good object lesson in why you should train your tech agents with other spy skills.

What Happens
After the events of Seeds Coulson has the tea tracking down Ian Quinn. A company called Cybertek is linked to him and covertly transporting goods through Italy on a rural train line. After talking to local law enforcement they go undercover to intercept a package. Coulson and Simmons pretend to be father and daughter, Skye and Fitz pretend to be tourists and Ward pretends to be a conductor. The op goes wrong and Coulson and Ward are thrown off the train, which disappears after a weird grenade is thrown at them. They return to the Bus and meet Russo from the local team, he is killed by May. It turns out she was thrown off the train, and found Coulson and Ward insensible by the tracks. Russo captured her, explained Shield was interfering with his lucrative side-business and tried to torture her, but she quickly escaped and tracked him to the plane. The train is found by Shield satellite. Simmons, who was also knocked out, is hidden in the baggage compartment and thinks Fitz and Skye disappeared. When the op went wrong Fitz realised that a stronger form of the toxin in the night-night gun was being used against them. He and Skye were able to track the package to a villa and Fitz activates a tracker for the team to follow. Skye goes in and finds Mike Peterson in a hyperbaric chamber the cellar. Quinn arrives and fits Mike with a bionic leg then tries to order him to kill Skye. Mike says that's not his orders, so Quinn shoots her in the stomach twice, saying he's been ordered by the Clairvoyant. Meanwhile the Shield team arrive at the villa and capture Quinn, but Mike is ordered not to engage them and escapes. Coulson finds Skye bleeding out in the cellar and Simmons puts her in the hyperbaric chamber. This sustains Skye, but she needs immediate medical attention. Mike Peterson (and his new bionic leg) clump past a park and he uses a notebook to ask if he can see his son, the orders in his eyesight tell him 'Not Yet'.

The non-linear storytelling here is quite neat, with each piece of story revealing events as they happen to certain characters before resetting and showing what someone else experienced. The narrative is built up, creating then asnwering questions. The audio cue of the announcement to is well used, though I question whether a non-touristy, rural train in Italy would have English announcements. Then again it does contain a lot of English speakers.

Coulson's Alive!
Coulson's renewed determination to get Quinn shows he's setting the agenda for the team now, rather than waiting for Shield to pass on orders. He meets with Russo and despite the amicable tone and setting muscles in on his territory. Having Simmons pretend to be his daughter yields possibly the worst undercover experience ever, and all Coulson can do is sit there in stunned awkwardness. He really needs to get that girl some training. Coulson is angry and guilty about the junior team members being lost in the field, none are trained for the situation. Coulson gets angry at Ward about his relationship with May, I'm not sure if there's a double standard here, as Coulson didn't seem to blame May or get angry at her. I don't know if it has anything to do with their genders or whether it's because Coulson doesn't trust Ward as much as May. Coulson patches May up after her ordeal, despite her instinct to do things for herself. This keeps happening, they're old fiends, but there's distance between them as each wants to be self-sufficient and they both dance around whether to accept help from the other, even though they'd give it happily. Coulson is desperate for Skye to survive, he's guilty that she was ever put in that position and angry at Quinn for what he did. At the end Coulson stands by the chamber and stares a Skye.

The Cavalry
May seems to take pleasure in off-balancing Ward by revealing she already told Coulson about them, a distancing technique I assume. She says she hates undercover (after episode 1 of series 2 I love May undercover, she is Amazing) but other being haughty she doesn't do much. As resident Action Woman she is quickly on top of the train tracking the package with tech, then improvising in a dangerous situation among enemies. May's storyline reveals that the train didn't disappear, Ward and Coulson were knocked out and lost time. It is as she's trying to help them that she is captured, again her storyline explains the hot-wired van the agents find when they wake. Even when Russo has her hanging from a rope and stabs her she's never intimidated, and in fact stabbing just gives her access to a knife which she uses to free herself. At the end May tries to offer comfort to Ward, so perhaps she's not as distant as she intended.

Meh, Ward
Ward asks May about why Coulson and Skye are so driven, sensing it's a personal thing, she won't tell him and makes it clear there's nothing personal between the two of them. Ward is the one who is first targeted by their enemies and runs through the train telling the others they've been made. Ward is the one who raises the issue of him and May. Coulson makes very clear that if it's a problem Coulson will see that Ward's career is adversely affected, which must be against protocol, but then so's sleeping with team members. At end Ward takes out his anger about what happened to Skye by hitting things and brushes off May's attempt to comfort him.

Science Hermione
After the hilariously awful attempt at lying in The Hub, Simmons has attempted to rectify her inability to improvise by over-researching her undercover backstory, leading to another hilariously awful scene in which she entirely fails at any kind of spy skills. Having decided that Coulson is her distant, American businessman father and she's a grieving daughter who's just lost her mother, she proceeds to make a scene (as is planned) while describing aspects of their made up life with a weird amount of detail (this was not planned). Fitz is right, she does love homework more than life itself. When she's knocked out in the baggage carriage to her it looks like Fitz and Skye disappeared, and when she wakes she shoots wildly with the night-night gun. When Skye is found shot Simmons goes into medic-mode, this is her wheelhouse and she's immediately confident and efficient, getting Skye into the hyperbaric chamber and stablising her as much as possible. At the end when she is on her own she can be upset about what happened, and when Fitz appears she cries on him.

Monkey Boy
Fitz and Skye are paired as the team's techies. Fitz suggests that as they're travelling together they should pretend to be from the same country, demonstrating his ability to do an American accent. When Skye improvises that they're a couple Fitz gets tense and quiet, unsure what to do and not happy with it. Later when Skye calls him on his he covers with his usual brand of sarcasm. When Simmons is knocked out Fitz suggests hiding her somewhere safe and is both amused and concerned about how embarrassed she'll be when she wakes. He also shoots the man who shot Simmon's with the night-night gun, even though he's already knocked out. Skye convinces Fitz they can still follow the package, even though they're lost the rest of the team. When they get to the villa he is outside disabling the cars while Skye goes in. At the end he finds Simmons and holds her while she weeps.

Hacker Girl
She asks Fitz about 0-8-4s and whether he's heard of the code being applied to people, trying to subtly find out if he can shed any light on her origin now that she knows she's an 0-8-4 herself. Skye realises that she's flustered Fitz by pretending to be his girlfriend, personally I think you should ask a person if they're comfortable pretending to be romantically involved before putting them in that situation (although that would ruin many plotlines of Fraiser). Skye's drive to catch Quinn has her convince Fitz to follow the tracker even though they're lost the rest of the team. At the villa she never suggests Fitz goes in and even suggests something he can do outside. Skye discovers Mike, alive but badly burned and missing part of a leg, in the cellar and is shocked that he seems to be working for the Clairvoyant now. Unaware that he is being controlled Skye tries to reason with him. He does refuse to shoot Skye, but is only able to do so because he's not ordered to do so. After Quinn shoots Skye she struggles to survive and tries to get help even as she's bleeding out. 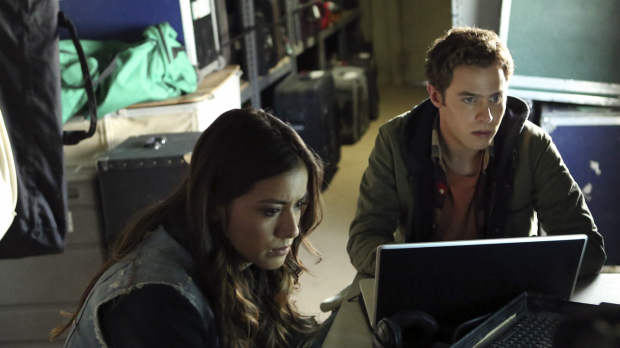 Weirdness of the Week
At first it seems like a train-disappearing grenade will be the weirdness. Then it turns out it's a dendrotoxin so strong it makes people lose time. The true weirdness is the Cybertek prosthetic leg which is given to the enhanced Mike Peterson, it telescopes from a band of metal to a working robotic leg immediately. The zoom in at the end reveals that Mike is now codenamed Deathlok (it sounds a bit silly, but its from the comics).


Villain of the Week
Quinn is the ongoing villain, after being called out by Coulson last week he callously shoots Skye twice in the stomach before ordering Deathlok to kill the couriers and assistants upstairs. He says he also has orders from the Clairvoyant, but he's not unwilling as poor Mike is. Cybertek are introduced, a tech firm who've evolved FitzSimmon's dendrotoxin into an airborne grande and created Mike's leg (and perhaps his other enhancements and the eye tech). They're somehow linked to the Clairvoyant and Centipede, though it's not clear how.

SHIELD LOL
Simmons is trying to lie again and it is hilarious! Poor Coulson just has to sit there, a captive audience at the most confusingly exposition-heavy tirade ever. At the end, when the plan is for her to get angry enough to spill her "mother's ashes" on the mark, she stands and yells "You never had any time for her, but you made time for your work! And your prostitutes!"
As they're pretending to help with the spilled "ashes" Coulson murmurs "Prostitutes? Plural?"

After the first part of Simmon's tirade Stan Lee shows up (with two anonymous pretty women who are basically set dressing) to tell Coulson off for neglecting his daughter. I wasn't that into it, I guess it's amusing that he's there, but not as funny as what was happening before. Plus, y'know, women as set dressing.

Skye's Scottish accent is terrible, never do that to anyone, especially a Scottish person.

Ward and Coulson try to use the holotable. And they just can't!
This is why you need your techs around. These boys are more old school.

Simmons is going to go undercover, in Hydra! Rewatching this series I still find that kind of surprising. Though I guess she's being herself, so doesn't need to invent and overly research/exposit a fictional backstory.

Deathlok doesn't have anything good happen to him again for a while. Poor Mike, you can see he's already hardening here, the only way he can keep going.

Is May's reluctance to rely on Coulson, or ask him for help because of the secrets she's keeping from him? She knows a lot of the answers to the questions that haunt him.