Clean up in Greenwich. This episode is sponsored by the Portland tourist board, apparently.

What Happens
Coulson's team clear up debris after the final battle in Thor: the Dark World (a dark elf and his big black space ship arrived in the Thames and got smashed up by Thor at the Old Royal Naval College). Skye thinks old gods being aliens is cool. In Norway a strange couple get a staff out of a tree and attack park rangers with super rage-strength. The team investigate and discover the staff is Asgardian. Coulson consults with Norse expert Professor Randolf in Seville. There's a legend of a berserker army who came to Earth and used staffs for extra strength. When they left one soldier stayed, broke his staff and hid the pieces in three places. The clues in the myth are vague but one in Seville seems promising. The team try to find the staff-piece but Randolf gets there first. When Ward touches the staff it hurts and he relives a painful memory. The hate group take the staff from Randolf. Coulson interrogates the professor, but he claims academic interest, it's not until the extra-aggressive Ward is turned on him that it's revealed that Randolf is the Asgardian soldier from the legend. He takes the team to the third hiding place, but the scary-Norwegians beat them to it. A fight ensues in which Ward takes the staff again, reliving family trauma when his older brother put his younger brother in a well. May takes the full staff and doesn't seem as troubled by it, though she later tells Ward she relives her worst memories every day. The Norwegians are stopped and Coulson suggests Randolf go hide in Portland. After a subtle invitation Ward joins May in her hotel room. Coulson dreams about Tahiti and though it seems pleasant he wakes gasping. 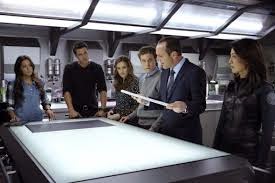 Coulson's Alive!
Professor Randolf was Coulson's contact after Thor's hammer fell on Earth. Coulson figures out Randolf is Asgardian, because he doesn't flinch at being confined or interrogated and he isn't curious when Coulson mentions meeting aliens. Coulson would've picked up on some of these traits from Loki, just before he was killed. Coulson decides to uses Ward's increased aggression to test his theory about Randolf. When Randolf gets stabbed Coulson sticks his hand into the Asgardian's chest to keep him alive. At the end Coulson considers picking up the staff, as Randolf says it 'shines a light' into your darkest memories. Coulson probably wants to remember what happened after his death but Randolf suggests he leaves it, then Coulson suggest the ancient professor lie low in Portland. After the credits Coulson dreams about waking up in Tahiti, it seems nice at first but he says 'magical place' and wakes gasping. Yeah, this is a guy who isn't haunted.

The Cavalry
May tries to offer her help to Ward while he's suffering from increased aggression, telling him he should stop punching things. He angrily brushes her off. May takes all the pieces of the staff, creating the whole weapon, and uses it apparently without affect. May gets more badass fight scenes than she gets dialogue (this feels true even if it technically isn't, I haven't counted), but when she picks up the staff it is particularly badass. The reasons behind it are good too. Ward asks amazed how May wasn't affected by the versions the staff gives her, she says she relives the worst moments of her life everyday. We don't know what those are, but it must be pretty dreadful. When the team stop to recuperate in a hotel May sees Ward in the corridor and leaves her door open for him. She's subtle about it, but she knows what she wants.

Meh,Ward
The berserker staff makes Ward flash back to the worst moment of his life. At first we're supposed to think that he is the boy struggling in the well, but it's revealed that it's his younger brother. Youngest Ward calls to Grant to help him, but sinister Older Ward forbids it or he'll throw Grant in the well too. Ward mentioned his dreadful family past to Skye in The Asset. Ward tells Coulson how much he avoids these memories, it's sensible to let his superior know he's been compromised. The increased aggression unsurprisingly makes Ward even more of a jerk than usual. Randolf and Ward both hate the effect of the staff, not surprising in Randolf, who enlisted to see other world. Ward and May are more warrior types but both are haunted by something that the staff brings to the fore. After apologising to Skye about his earlier behaviour Ward politely refuses her offer to talk things through. He does not refuse May's invitation.

Science Hermione
When they're clearing up in Greenwich Simmons ducks a call from her parents who are concerned (what with gods/aliens fighting not far away). Turns out she's been avoiding talking to them since the events of FZZT, not wanting them to worry them any more. Ward talks to Simmons to keep her calm while she's walking up the slanted tree to look at the imprint left by the staff. She knows that's what he's doing but goes along with it. She scoffs at Skye talking about magic, and is far from satisfied by Randolf's poetic but unscientific description of how the staff works. Ward is a real jerk while Simmons tests him, but she makes excuses for him as the staff has adversely affected his biochemistry. After Randolf is stabbed Simmons freezes up before treating him, he's not human so she's not certain about his anatomy. She's shocked when Coulson puts his hand in the wound, but gives him instructions to keep Randolf alive so his healing skills can take effect. At the end she finally takes a all from her parents.

Monkey Boy
Fitz moans about the menial clearing up job in Greenwich, scanning for alien signals in tiny rocks. Though he brightens when he says it's a job a monkey could do. Ward says Fitz is their monkey. He remotely guides Simmons through using the tech to scan the tree while he checks the data in the lab. Like the others he's scornful of Skye's magical-thinking. Fitz doesn't have a whole let else to do this episode.

Hacker Girl
Skye is impressed by the whole Asgardian-alien thing, trying to figure out which other gods might be aliens. She reckons that the Norwegian couple found the staff by magic, everyone scoffs at this, but no one else gives a better explanation. Skye figures out other hiding sites eventually realising there's a potential place right near by in Seville (Vikings travelled a lot further than people usually think). At the end Ward is impressed by Skye's quick forgiveness and her ability not to be angry about things, it sounds like she's someone who picks her battles. She realises that he saw something about his brother, and offers to provide emotional support if he wants.

Weirdness of the Week
Directly after Thor 2 Asgardians are the thing. It's cool to meant a regular Asgardian, as opposed to royalty and nobles. When Coulson asks Randolf if he knows Thor the professor laughs, he was a mason and then a squaddie, he didn't hang around with princes. He's an interesting character, enjoying history passing and watching the changes. He's also a bit of a lech, which isn't great when it's suggested he's seeing a student. I think maybe that was meant to be funny? The other scenes where he talks about/appreciates women are better.
The premise here, and in the films, seems to be that Asgardians are technologically advanced aliens, certainly no magic. Except that doesn't explain Loki's shape-shifting, or why his and Thor's mother is referred to as a sorceress. Also the scary couple finding the staff from the vague instructions in the poem is very unlikely without magic. The poem could refer to a lot of trees in Norway (which is 38% forest nowadays) and are hugely unlikely to still be relevant nearly 500 years after the poem and perhaps a 1000 years after the hiding. 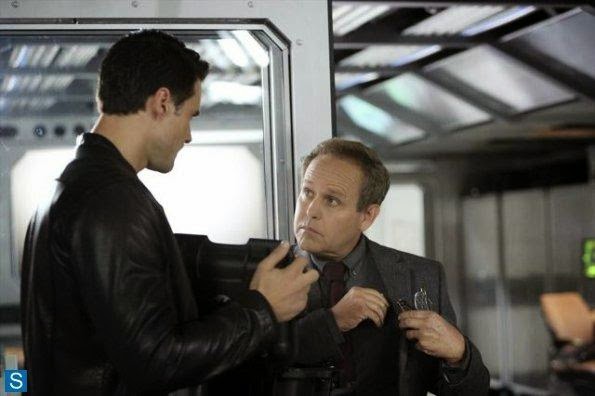 Villain of the Week
The Nordic hate group, personified mostly by Petra and  Jakob. I assume they're neo-Nazis, though their specific politics are never clear. They're a mostly faceless group of already violent and angry individuals  They aren't interesting, their oganisation and goals are vague at best and there's no explanation of how they know where the staff pieces are, or how they're getting around as quickly as the Shield team, who have a plane. They're just scary people who turn up in the right place at the right time to keep the plot going.

SHIELD LOL
Coulson: You know, it'd be nice if, for once, Thor and his people sent down the god of cleaning up after yourself.

This isn't a very funny episode. I guess having Peter MacNicol play an Asgardian is kind of humorous, and I liked his portrayal but it wasn't played for laughs. Spoilers into the Unknown

So an army of berserkers came to Earth thousands of years ago. Humans are weaker than Asgardians on their own. This unexplored backstory lends credence to Loki's claim that he's not done anything Odin hasn't done himself.

"Did I fall asleep?" "For a little while."
Aaaaah, Dollhouse reference! OMG the after-credit scene! Coulson wakes up in Tahiti being massaged. For those who've seen Whedon's very weird 2 series show this is a massive clue. This show has always told us something is wrong with what happened to Coulson, this strongly suggests his memories have been tampered with and he's been programmed with more than just 'magical place'.


My thanks to @AlasdairStuart and @runalongwomble for the spoiler pun suggestions.
Posted by Catherine Hill at 12:36