It looks like the team will expand, but in this pre-break episode things go sadly wrong so that there can be a cliffhanger.

What Happens
A man is dramatically busted out of prison by super soldiers, he's Raina's contact for the Clairvoyant from Girl in the Flower Dress. Coulson and team investigate and realise it's the work of centipede. Mike Peterson (from the Pilot) is brought in to help, his abilities (and mood) have stabilised and he's ready to work for Shield and make up for his previous behaviour, though members of the team are wary of him. The escapee, Po, was only visited by Raina, who Mike identifies as the woman who recruited him. Fitz and Simmons test Mike and create a suit that monitors him while he's in the field. Skye tries to figure out who her parents were and talks to May about it, but May reacts negatively. One of the soldiers attacking the prison has a sister at university, so Ward pretends to be from the lottery commission looking for her brother. They are able to track her call to him and use the signal to figure out where the super soldiers are. Raina has been running the super soldier operation on the move, so Po suggests they stop and confront Shield. Mike, May, Ward and Coulson go to Centipede's newest location and are attacked by super soldiers, one is caught, but he's got the tech from Eye-Spy and is killed remotely by Raina and Po, who are surprised to see Mike is alive and stable. Coulson talks to Mike about his son and what kind of life he wants to have. Mike calls his son, but Raina is there and makes a deal. Mike will be swapped for his son, and big Shield can't get involved, the team make plans to retrieve Mike once Ace is safe. Mike asks for Coulson to accompany him to the rendezvous. When they get there Ace is realeased, but it turns out Raina wanted Coulson, not Mike. Coulson is drugged and taken away. Mike sees Ace safely to Skye then returns to help Coulson, but is caught in explosions. A helicopter flies away and Raina tells Coulson they want to know what happened the day after he died. 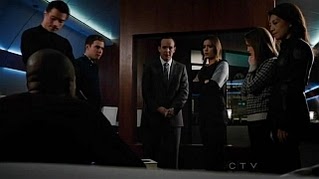 Coulson's Alive!
Coulson tries to manage Skye's expectations about the hunt for her parents, but still doesn't tell her what he really knows. He tells her that he brought May in on it, something which pleases neither woman. Skye confided in Coulson, but May is Coulson's confidante and his oldest friend on the team. He brings in Mike for a second chance, which is what he did with Skye and Amadore. Impressed by Mike's repentant, keen attitude Coulson has him checked by FitzSimmons so that he has a better idea of Mike's capabilities. It looks like Mike is being set up for a permanent place on the team, which makes the end of the episode all the more sad. Coulson talks to Mike about his son, and suggests he thinks about the kind of life he wants. Coulson talks about choosing between a normal life and the job, saying that being unattached makes the bad choices easier. There's no regret when Coulson mentions the trappings of family life, but it's clear he knows what he's chosen to miss. Coulson has Ward use a low-tech spy method, the mysterious-stranger-with-a-windfall is supposed to arouse suspicion. While on the op Coulson reminisces about the cellist he left behind (first mentioned in Avengers). She's the reason he likes Portland so much. At the end, when Mike apologetically reveals his betrayal, Coulson doesn't blame him (kinda heartbreaking!), he was the one who advised Mike to put Ace first.

The Cavalry
May isn't happy about Mike coming on the team, but as Coulson points out he did throw her at a wall. He also tells Skye that May's helping with the search for her parents, which pleases neither woman and May disapproves of Coulson getting involved in that. May doesn't want her sex life with Ward to have any affect on their work and sets strict boundaries about talking about it on the plane. When she thinks he took a punch for her in a fight out f sentiment she's furious, but Ward explains it was a tactical decision. Skye walks in on the conversation and because she's in a bad mood May reprimands her for looking for her family, reveals Coulson didn't tell her everything, and suggests she figure out her priorities.  I kinda hope May didn't realise how much this would upset Skye, but she probably did. Perhaps she meant it as a test of Skye's loyalty/resolve, or maybe she was just angry and embarrassed.

Meh,Ward
Ward makes a veiled reference to him and May sleeping together while they're sparring on the plane, she immediately stops him. Ward is confused by the idea that he was protecting May out of sentiment in the fight, and he explains it was tactics. It's not clear whether Ward has feelings for May, he says something to Coulson about dating someone from the agency, but Coulson suggests it;s a bad idea and drops it.

Science Hermione
Simmons is excited that the Centipede extremis serum has been stablised enough that the sildiers don't explode, it's possible she's a bit too excited seeing as how they are the enemy. She's really happy to discover that their night-night gun is what properly stabilised Mike's extremis serum. Simmons is attracted to Mike, who is in very good shape what with the super soldier serum and all the Shield training. This is cool.* Simmons creates an odorless tracker which they put on Mike when they think he'll be taken by Centipede.

Monkey Boy
Fitz is really happy to discover that their night-night gun is what properly stabilised Mike's extremis serum. He's interested in Mike's centipede arm-thingy, delivery system, which can't be removed. He's also very into the challenge of making Mike a diagnostic/monitoring suit. He notices Simmons reaction to Mike and seems to disapprove. This is not so great. Fitz has a device that can trace Simmons' odorless tracker, an non-electronic way of finding Mike.

Hacker Girl
Skye is uncomfortable with May knowing her secret, and tells Coulson this, but it's already done and he is charge of the team. When she tries to approach May about it she gets only dismissal and later a negative reaction which upsets her deeply and causes her to tear up her research. Skye is happy to see Mike and to two share a nice moment of marvelling that they're both in Shield now given the circumstances of their meeting. Skye is really impressed with Shield's tech, especially the lip reading programme, and though Coulson won't remove her bracelet yet she has got some cool tech to play with nonetheless. After Ace is given to Mike he takes him to Skye, as she's the only familiar face, though he spent little time with her before and that was a scary time again.

Weirdness of the Week
Centipede, the adversary since episode one, here the breadth of their operation is partially revealed. The route to stabilising the super soldier serum is the main Centipede plot we've seen, especially in The Girl in the Flower Dress and the whole thing with 'Sorch'. Even with the fireproof-platelets ability added to the mix they have to keep injecting the soldiers who require a lot of upkeep. When Raina sees Mike is stable Po says he's got the answer to phase 3, we're supposed to think he's talking about Mike's stable serum, but I suspect it's Coulson he means. This is the first time that the Eye-Spy tech has been linked with Centipede, suggesting a much bigger and scarier operation. 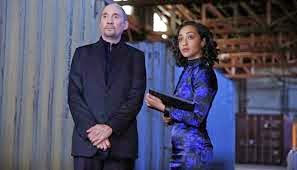 Villain of the Week
The Clairvoyant remains a mysterious figure, even to Raina. She's intrigued by him and his precognitive powers, though she knows her life is worth nothing to him. It's not clear how the Clairvoyant is in contact with Po, as Raina was his only visitor. Po certainly talks as though he has powers, and uses this to keep Raina entirely ignorant of her employer and suggesting his interest in Coulson is because he can't sense stuff about him. No one in Shield really believes in psychic powers, though Skye is open to it. Po is less charismatic than Raina, but they're both awful people.

SHIELD LOL
Ward does the old 'he's behind me, isn't he?" line with Mike. It's not really funny as it's pretty tired and always obvious it's coming.

Simmons very unsubtly points out that the team works with people who have shady pasts. Naming no names, know what I mean, nudge, nudge, wink, wink carefully not looking at Skye.

This isn't a funny episode really, it's not supposed to be. It raises the stakes, reveals more of the enemy and ends on a cliff hanger.


*Tangent before the Spoilers
This show has a few positive moments of women being appreciative of male physique. Maria Hill, Agent May and Skye all make comments about Thor at different points. It's usually done in a light-hearted, humorous way, and that's how Simmons noticing of Mike is handled too. It's cool that Simmons is a bit awkward and bumbling about it, because that's not always something woman are shown doing on TV. As someone who personally doesn't find large muscles attractive (Thor's arms alarm me more than anything else, which has confused some straight men I've mentioned that to) I think it'd be cool to see different types of men used for eye candy, but it's a minor quibble. Plus that might have been a thing that happened and I didn't really notice, I'm pretty bad at noticing men. 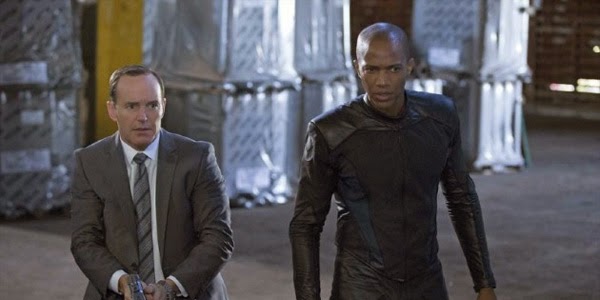 Coulson says that Centipede's advancing tech and ability to keep popping back up suggests amazing manpower and resources. Of course Coulson doesn't realise that they're so good because they're using Shield resources, via Hydra.


On a rewatch the motives of the 'Clairvoyant' makes a little more sense. The super soldiers are useful and part of a bigger plan no doubt, but the desire for a stable restorative/rejuvenation serum is strong for the guy running things. It also makes sense that he's so focused on Coulson, knowing that he returned from death, but not knowing how.

This may be the start of me not liking Fitz so much this series. Simmons is the more socially aware/able of the pair (being female she's likely had more social pressure to be so), and that works fine. Here, as Simmons notices Mike, Fitz sees it and reacts with definite disapproval. It's played for laughs, and it is pretty funny that Simmons is kinda awkward, but it's the start of a character arc I'm decidedly meh about. Why can't they just be very close friends? Men and women are rarely allowed to have such relationships on TV, even though that happens in real life. Even if Fitz does feel romantic Simmons why does he have to get peevish about Simmons noticing other people?

They're trying to suggest Ward likes May, but it's just his evil way of integrating into the team and distracting the most suspicious member.