What Happens
3 days after the end of The Bridge and the bus is overrun by Shield agents under the command of Victoria Hand, all looking for Coulson and Centipede. Ward and May capture a dealer in alien metal (like that used for the Centipede extremis delivery system). Skye tries to trace his clients, but Victoria Hand doesn't trust her and has her sent off the plane at May's suggestions. Ward, Fitz and Simmons help her get away without being held up. Ward gets impatient with the other Sheild agents' methods and gets answers from the dealer, leading to raids against Centipede. Out in the world and hampered by the Shield bracelet that stops her hacking Skye uses old school info sources, initiative and cunning to get into the home of some rich, trader guy. Coulson is held in a fake desert town and Po interrogates him with force and puts him in a machine that tries to access his hidden memories. Raina turns up and suggests a different approach. Po speaks to the Clairvoyant by phone and is somehow killed remotely, leaving Raina in charge. She convinces Coulson that he deserves to know what Shield have been hiding from him about his own death. Skye manipulates the trader into gaining access to client info and uses that to track down Raina's payments, including a land purchase in the desert. She contacts Simmons and though Victoria Hand doesn't consider it a priority Coulson's team are allowed to go and check it out. In the machine Coulson relives his memories of Tahiti, but they warp into a painful situation in a spooky med lab, where a machine stitches his brain and he screams for them to kill him. Skye and May unplug the machine and get Coulson out. Raina is taken in police custody, Agent Hand gratefully give the Bus back to Coulson, who removes Skye's monitoring bracelet and assures her that Centipede were just messing with his head. Coulson visits the doctor he remembers from his procedure, who regretfully reveals that they went to dangerous and unethical lengths to save Coulson and then implanted fake memories so he'd forget his suffering. Mike Peterson wakes in a small room, badly burned and with a missing leg. Just as he's trying to figure out where he is words appear in his vision. He's being controlled. 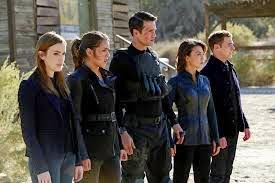 Coulson's Alive!
Coulson withstands Po's rough means of interrogation, and is defiant about revealing anything to him. The fake town is in the middle of nowhere and guarded by super soldiers, which Po lets Coulson see. Po also reveals what the Clairvoyant has told him about Coulson; that his father died (possibly in front of him) when he was very young, that he's haunted by questions about what happened to him after he died. When Raina takes over, on the Clairvoyant's instruction, she uses her charm and persuasion, but similarly reveals details from the Clairvoyant about Coulson's life; his mother died leaving Shield his only family, that he gave up normal life but was in love with a woman who was heartbroken when she was told he died. Raina refuses to use force, she persuades Coulson that Shield have betrayed him by lying to him, and this cracks the defiance he showed Po. He tells her about the 'magical place' line and he's willing to get in the machine, even though he knows Raina will use the info for nefarious purposes. The reveal of Coulson's true memories raises more questions than it answers, but deepens the mystery nicely. He was operated on (by some kind of robotic, electric knitting machine for the brain) and desperately wanted to die. When Coulson is restored Agent Hand receals that the bus is not her scene, but the reaction of his team shows it's just where Coulson ought to be. His clandestine visit to the doctor reveals few details, just more horror. The doctor says Director Fury went to ungodly lengths to bring Phil back, and he only was brought in on the 7th operation, at which time Coulson was alive but wretched with agony. Though he's sorry he ever got involved the doctor explains the happy memories were to bring back the man Coulson once was. Victoria Hand questions why there's so much effort and interest in getting Coulson back, and it's clear that Nick Fury will stop at nothing to keep him.

The Cavalry
May tells Agent Hand that Skye is of no use on the plane. Skye and the other team members take this as a vote of no confidence, but May later reveals to Ward that she knew Skye would be hampered by staying and could do much more without being under Shield's thumb. It seems Skye has earned May's trust, or at least she trusts her dedication to Coulson. Later Victoria Hand accuses May of playing her, damn right.

Meh,Ward
Ward questions how May handled Skye, arguing that she proved herself a lot. When May explains her motives it's clear he doesn't get her. Ward's impatience shows the pressure and emotion Coulson's team are dealing with. He gets Hand's interrogator to leave and has FitzSimmons open the ceiling of the interrogation room, scaring the dealer into confessing. It seems like Agent Hand might reprimand him, but she just seems pleased that he got results.

Science Hermione and Monkey Boy
Both are concerned about Coulson and dedicated to getting him back. They do a few things they wouldn't have before, with Fitz expressing vengeful thoughts while Simmons is understanding but frazzled. Fitz and Simmons give Skye a satellite phone to covertly contact them if she finds any leads while she's off the plane. When Skye does call Simmons is super unconvincing.

Hacker Girl
I'm liking Skye as a character much more this time around. I found her less engaging on my first watch, but this is the episode where she shows how resourceful she can be. Unable to get near computers without her bracelet shutting them down Skye finds details of a shift trader in a magazine. She takes his car before the valet can and then crashes it, activating the rescue service to take her to his house. She has to dial his phone at a distance but gets him to his home, where she pretends to be Agent May (with leather jacket and big sunglasses as part of the cosplay). She uses the Shield logo that appears whenever she interacts with computers to convince him she's an agent, and overpowers the security guards that come to his house, getting one to do the hacking for her when the trader turns out to be useless for anything except entering his password. Skye knocks Raina out with a single punch when she tries to say that the machine and his agony are for his own good. Skye hears what he's crying out but when she tries to talk to him about it Coulson brushes it off an won't accept her comfort. She has no luck with these guys.

Weirdness of the Week
What is that machine? Raina's been in it before, and it worked on her but what did it reveal? How do these strangers know so much personal info about Coulson? Is their boss really telepathic? Also Hand is right to be confused, why is Coulson so important? The villains want him to learn how to bring their soldiers back from the dead, and Fury is trying to protect his secret, but why was he so desperate to save Coulson in the first place? Especially when the agent's death was a rallying point for the big hitters.

Villain of the Week
Raina tells Po she would never make someone do something by force, and it's true we never see her do that directly, though this is a woman with super soldiers at her disposal. I assume that her reference to their other guest is poor Mike Peterson, who really doesn't deserve all this. Po is a murderer and though a veneer of gentility is applied to him it doesn't really matter, his death (by some kind of mobiile phone freeze ray?) proves he's small fry and not worth our concern. I had forgotten about him before I started this rewatch. The Clairvoyant is a mysterious, malevolent figure at this point and though Coulson wants to believe he's a fraud Po and Raina know too many personal details.

SHIELD LOL
"Is that a roomba?"
A blackmarket deal is going down for alien metal, a disk slides across the hotel room floor. Nope it's a flash bomb and an instant later everyone is blind and being raided by Shield.

"David thinks I'm a cool dad." "David thinks you're an asshole."
Skye, having poked through the contents of his desk, convinces the dodgy trader that her agency has been watching him for some time and criticises his relationship with his son.

"You see, I have an assistant who does all this for me."
The trader whispers this to a security guard after it's revealed that he has no idea what Skye is talking about when she asks him to follow transactions. I found this hilarious because my previous job taught me that when people are in high paying roles they don't necessarily know how to do basic things, because they have assistants to do them.

Simmons tries to lie again! When Skye calls Simmons' voice is big and fake and obvious.

Skye uses May's name to the trader, if anyone's gonna get in trouble it might as well be the person who get her kicked off the plane. They episode never shows how Skye obtains the jacket and sunglasses, did she have any money?

The Search for Spoiler (for future AoS eps and series 2)

When I first watched this I honestly didn't know what I was seeing with the robotic brain knitting machine or what that meant. Turns out that's a bit of a red herring and it's the drug they used on Coulson that's the key. The covered up memories only reveal a non-specific part of the truth, and this isn't the first time Coulson's memories have been tampered with.

'Magical Place' is a obvious phrase, but there are others. When Coulson asks the Doctor "What did I become?" it links directly to Raina's later story (what is gonna happen with that? OMG!). There's also 'defining moment' which has been used by Ward already, is used by Po here and will be used later as well.

Fitz tells Simmons to "embrace the change". Embrace Change was the tagline for Marvel Comic's Secret Invasion event a few years ago, something about Skrulls invading Earth.

The Clairvoyant certainly gives his people a lot of personal info about Coulson, like the kind of stuff a friend would know/be able to infer. Funny that.

This is our 2nd glimpse of the writing which is such a thing in the first part of series 2. It's a bit blink-and-you-miss-it, but when Coulson is in the machine a carving of the writing appears just before he sees a starscape. It's all super mysterious.

Skye's May costume will not be the last time team members dress as each other. Next time will be even funnier.

My thanks to @AlasdairStuart and @runalongwomble for the spoiler pun suggestions.
Posted by Catherine Hill at 16:36