What Happens
At the Shield Sci-Tech Academy some students are almost frozen in a swimming pool by a device based on designs by Fitz and Simmons. As the youngest and most successful alumni the pair are asked back to investigate and give 'the talk' about not using your potential for evil. Skye and Ward join them, neither having been to Shield's science "Hogwarts" before. During Fitz and Simmons' lecture another student is  frozen solid. Fitz goes to talk to Donny, the boy who was frozen, both are brilliant and socially awkward. Donny idolises Fitz and discusses ideas for advanced power sources. Simmons shows Ward and Skye the Boiler Room, a kind of club where students go to relax, they ask around to establish suspects. Meanwhile May and Coulson go on a mission to look into Skye's past, as Coulson has been withdrawn since the events of The Magical Place. The trail leads to a former Shield agent hiding in Mexico. May and Coulson learn that Skye was found in China as a baby after a whole village was slaughtered. The agemts who found her set up a protocol that meant the foster system kept moving her so that she would be safe. May says Coulson can't tell Skye. A student reveals Donny is friendly with Seth (the other student who was almost frozen) and they've talked about meeting Fitz and Simmons. It seems the pair planned it and presumably attacked themselves to evade suspicion. Fitz tries to confront Donny, sees he made the freezing device, and is knocked out by Seth. Turns out the pair have an offer to sell the tech to Ian Quinn (the evil billionaire from The Asset), who is flying in to see a demonstration. When he hears Shield are there he wants to turn around so Seth and Donny do a large scale test, creating a super-storm. The Bus flies into the centre of the storm to stop the machine, Seth is accidentally killed in the process and Donny is taken into custody, he may have ice powers now. Coulson tells Skye what he and May found, and that she is an 0-8-4, but instead of destroying her the information makes her feel that Shield has always been looking out for her. Quinn phones Seth to ask about the device, Coulson answers and calls Quinn out, then Quinn reveals he's working for the Clairvoyant. 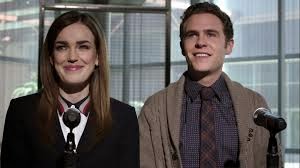 Coulson's Alive!
Since being rescued Coulson has kept away from the team, Ward thinks it's because he's saving face, but Skye suspects, and May knows, better. He's looking at the file about his death and May thinks he's obsessing. An op with just two old friends should be a good way to get Coulson out again. On the mission he tells May that he's afraid of the gap in his memories, what if there's more. May assures him that she knew him before that and he's still the same person. After talking to the former agent Coulson won't bring him in, reasonng that after his whole time was gradually crossed offover 20 years ago Shield still might not be safe for him, a sign that he won't trust the system now. The revelation about Skye crushes Coulson a bit, he wanted to help her but fears the news will only break her heart further. When he does tell Skye, reasoning that he's not happy that secrets are being kept from him, her positive reaction amazes him and gives him hope. It was just what he needed.

The Cavalry
May knows Coulson needs distracting and she now wants to help Skye find her past, reasoning that she has proved her loyalty and earned her place. While they wait for their target May talks about what each of them might do if they wanted to disappear and when Coulson asks what's with the uncharacteristic chattiness she point out that it's because he's not talking. She tries to convince Coulson that he can trust the system, or if not that he can trust her and himself. When Coulson says he's tired of secrets May tells him that she and Ward have been having sex. Any awkwardness is averted by their target showing up and bolting, so May has to chase him down alleyways. May tells Coulson Skye should be protected from the truth.

Meh, Ward
Ward shows signs of the rivalry between Operations and Science & Technology Academies, which is just another iteration of the whole US high school jocks and geeks thing that American TV seems obsessed with, at least here it's playful and not the focus. Ward shows Skye the Wall of Valor, which is a memorial that each Shield facility has. He reassures Skye that she has earned her place on the team, even if she got there through an unconventional route. Ward suggests that the Academy's official investigation won't bear fruit because the cadets are trained to keep secrets, so he speaks to an ambitious girl in the boiler room pretending to offer her a chance to jump rank in Operations. Ward is confident about running through the super storm, until he sees it; he may be the tough guy but he's not an idiot.

Science Hermione and Monkey Boy
It's nice how they each describe which part of the other's research went into the device, their double act-thing works because it's built on long standing friendship and knowledge of each others methods and work. Fitz and Simmons feel very strongly for the Academy, which isn't surprising as it's where both seemed to find their place and could apply their genius. The fact that you have to have a PhD just to get in and they're the youngest graduates gives you an idea of the prodigies the pair are. Fitz particularly seems to have found his place there, as he discusses with Donny how little his family understood him. During their speech to the cadets Simmons talks about the history of Shield and the Strategic Scientific Reserve that preceded it, she also mentions the kind of organisations that take advantage of people's potential, like Hydra and AIM. Fitz mostly makes jokes. Fitz wants to believe the best of Donny as they're so similar, but he concedes that the influence of Seth (and Quinn through him) has led Donny down a bad path.

Hacker Girl
Skye is curious to see the Academy, aware that this is where everyone else got their training. The Wall of Valor gives her imposter syndrome, feeling as though she cheated by hacking her way onto the team. It seems as though she's searching for a connection there, probably because she still suspects her mother was the Shield agent who left her to the orphanage. We only see Skye's reaction to Coulson and May's discovery in flashes with Coulson desrcibing in voiceover. She learns that she herself is an 0-8-4, and was found as a baby after a massacre, the agents that found her set up a system for her protection and most died soon afterwards. The news is shocking, but instead of falling apart as May and Coulson thought she would Skye understands that this explains her past. It was not that every foster family rejected her, it was the protocol that stopped her from being settled anywhere. She also feels that Shield has been protecting her since she was an infant, which ties strongly with her moment in front of the Wall of Valor early in the episode.

Weirdness of the Week
The Academy is like some kind of Science and Tech Hogwarts, which is partly why I've given Simmons the nickname I use above (I actually like Simmons more than Hermione, but I've not really been into the Harry Potter books for over a decade). The idea of the Academies is interesting, Sci Tech seems to be a postgraduate, research wonderland; Operations sounds like military training, we don't know much about Communications, (and no one talks about the fourth house, where all the evil cadets go) but it seems weird to me that these vocational training institutions are described in terms of school. Not sure why Donny gets ice powers, but it's a superhero universe so it doesn't need to make sense.
The second weirdness is where Skye came from, and what she is. An entire village is massacred and a top agent dies getting her out. It's not clear whether the former agent thinks Skye herself is dangerous, or whether it's the circumstance she was in, he seems happy she's alive but warns that being involved with her us dangerous. It opens up big questions about Skye's origins. 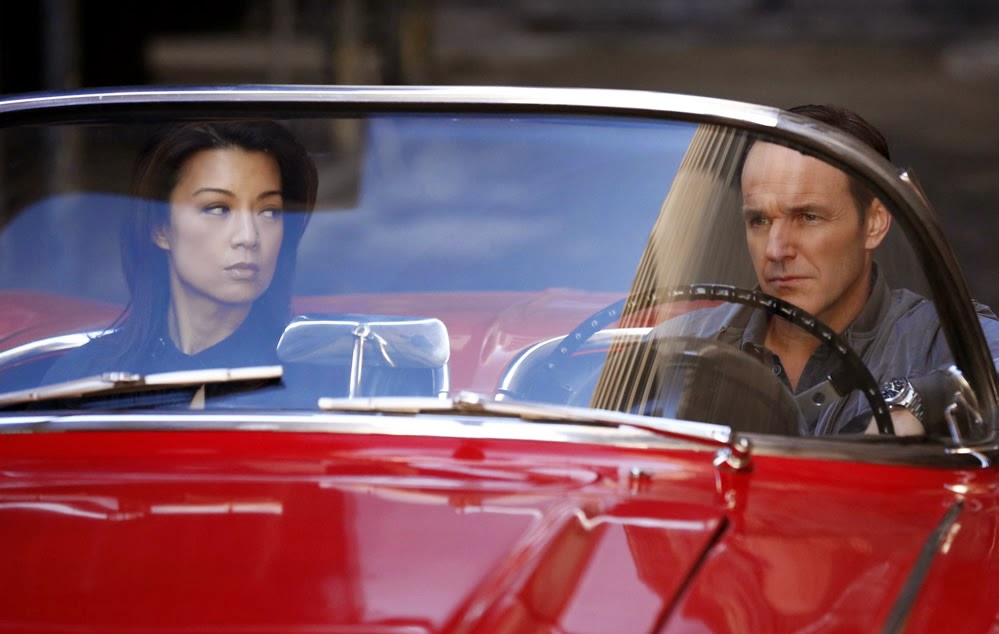 Villain of the Week
Ian Quinn is looking to exploit the talents of young geniuses who're being trained by Shield. Looking for talent and tech and funding them through Seth's father's connection to his company. Ian is businesslike but pushy with the boys, interested only in what's tin it for him. When Coulson speaks to him Quinn reveals that he's working with the Clairvoyant, tying his company and resources into the shady organisation we've glimpsed so far. Neither Seth nor Donny are villains, but it seems that Seth may have taken advantage of Donny's smarts and loneliness, their friendship/partnership wasn't common knowledge.

SHIELD LOL
"Academy of communications ... they're the biggest and focused on data analysis. It's the easiest to get into."
"Boring."
"That's where you'd be, Skye."
"Thanks."
Skye is not happy with Fitz's tactless Sorting Hat technique.

Skye mentions how young Fitz looks and he responds defensively. "Time will come when you won't make fun of me for that. You'll be jealous. You'll be jealous, wrinkly old hags."
I can empathise, at a certain time in your life it's really irritating that everyone thinks you're younger than you are, it's harder to buy age-restricted products and there's the suspicion that people are always underestimating you.

"Well, Simmons is probably smarter, technically, but that's just because she likes homework more than life itself."
Fitz privately concedes a point about him and his best friend.

Fitz jokes about boring professors. Simmons is smug that Operations doesn't have anything like the Boiler Room. It's light hearted stuff but not hilarious. 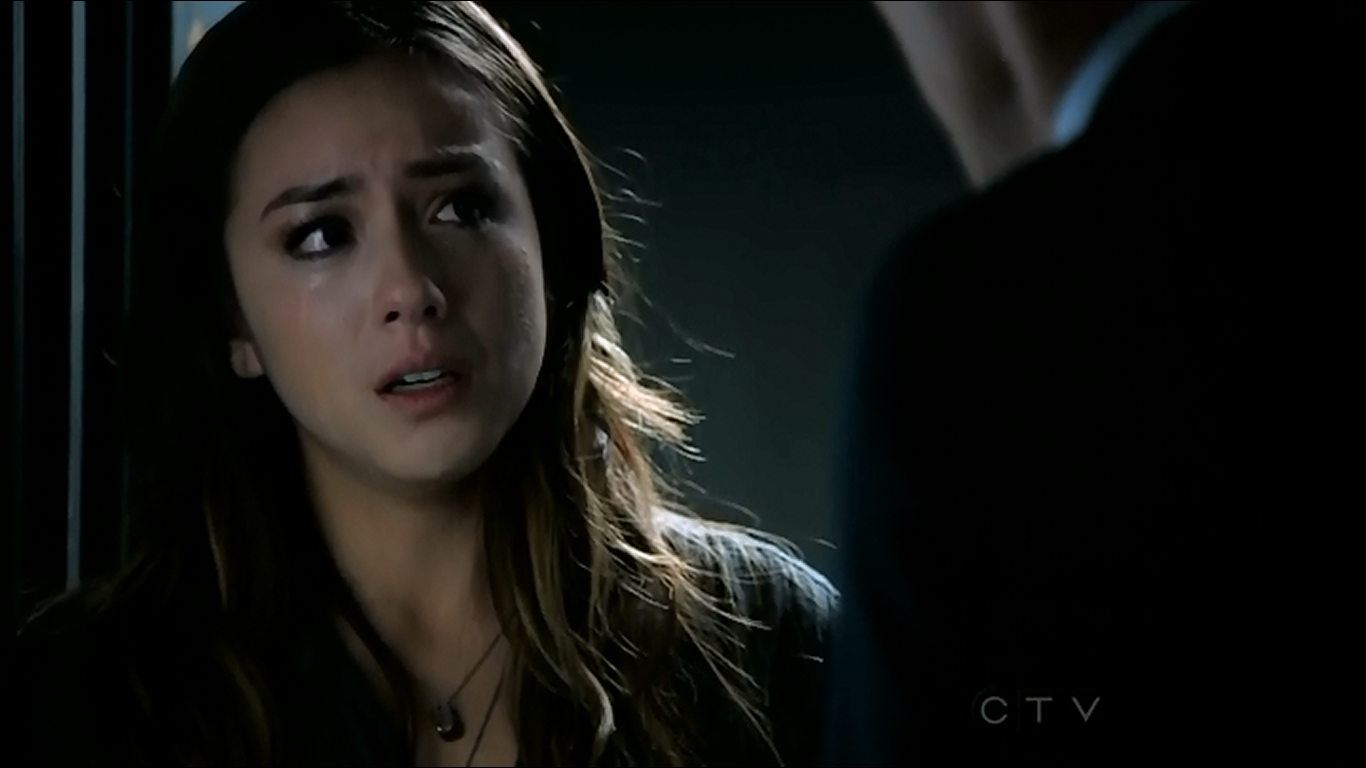 Simmons mentions the SSR -Shield's forerunner- defeated Hydra, aww bless.
If the Academies are like Hogwarts (and hey this is the internet, so one is more or less honour bound to compare stuff to Hogwarts, even if the show itself hadn't started it) then Hydra is like Slytherin, if Slytherin were disbanded and distributed into the other houses because it's a daft idea to stick all the evil children together. Though it's a sign that Quinn/Centipede/Clairvoyant are distanced from Hydra, who must use the Academies (especially SciTech) for recruitment.

On the Wall of Valour Skye sees the plaque for "Bucky" Barnes - who died before Shield was formed, never went to the Academy (he was in the US Army and died in WWII, that's different memorial), and as it turns out isn't actually dead.

Skye's origin is weird. The full weirdness is far from revealed yet. We know Hydra are the ones who massacred the village, to get Skye's mother. It seems Shield went in to save Skye as an 0-8-4, but its not clear how they knew about her or why she specifically was being rescued. Also I don't recall but I think her dad wasn't there for some reason, or else did a counter-massacre, who knows with that guy.