The Only Light in the Darkness

What Happens
Ward arrives at Providence base and as his wounds are tended he tells the team that Hydra raided the Fridge. He says he managed to kill Garrett before he escaped. His story is interspersed by clips of him and Garrett raiding the Fridge. Coulson is worried about the release of dangerous prisoners and asks Koenig to check on a specific one. Keonig refuses to let anyone leave until they've been through 'orientation', which means answering questions in a specially-built lie detector chair. May, Skye, Simmons, Fitz and Trip are questioned, and we learn that Trip's grandfather was a Howling Commando (from Captain America). Ward is questioned, but his pain skews the results and though Keonig gets suspicious he eventually lets Ward pass. Coulson makes clear he doesn't trust May and suggests she leave. He takes Fitz, Simmons and Trip to Portland to track down an escaped prisoner who can absorb energy, he's obsessed with a cellist there. Coulson caught him before by overloading him with light, but that doesn't work this time as he's gotten stronger during imprisonment. Skye focuses on finding the Fridge escapees and convinces Koenig to let her hack the NSA satellites. She also discovers Koenig can track everyone in the base using the lanyards he gave them. Ward asks her to decrypt the hard drive (as Garrett ordered him to), but she says the encryption is location-based, so they'll have to leave to do so. Ward is about to take out May, when she tells him she's leaving because she can't stay while Coulson doesn't trust her. Ward quietly kills Koenig, then tells Skye how he feels about her and they kiss. It turns out the cellist, Audrey, is the woman Coulson was seeing when he died. He gets Simmons and Trip to speak to her, she still thinks he's dead. Audrey is used to lure her stalker out and the team blast him with spotlights Fitz has altered. At first it doesn't work, but Coulson helps from the shadows and the stalker explodes, knocking Audrey out. Coulson comforts her until she wakes, but leaves before she can see him. Skye tracks Keonig's lanyard to a storeroom, where Ward hid his corpse, she realises Ward is Hydra and freaks out. When Ward finds Skye she acts natural and agrees to go with him when he pretends the team have summoned them. Coulson and the others return to find the plane gone. May, having crossed the snow wastes, is picked up by her mother, a retired agent from a different agency. May is going to talk to Agent Maria Hill. 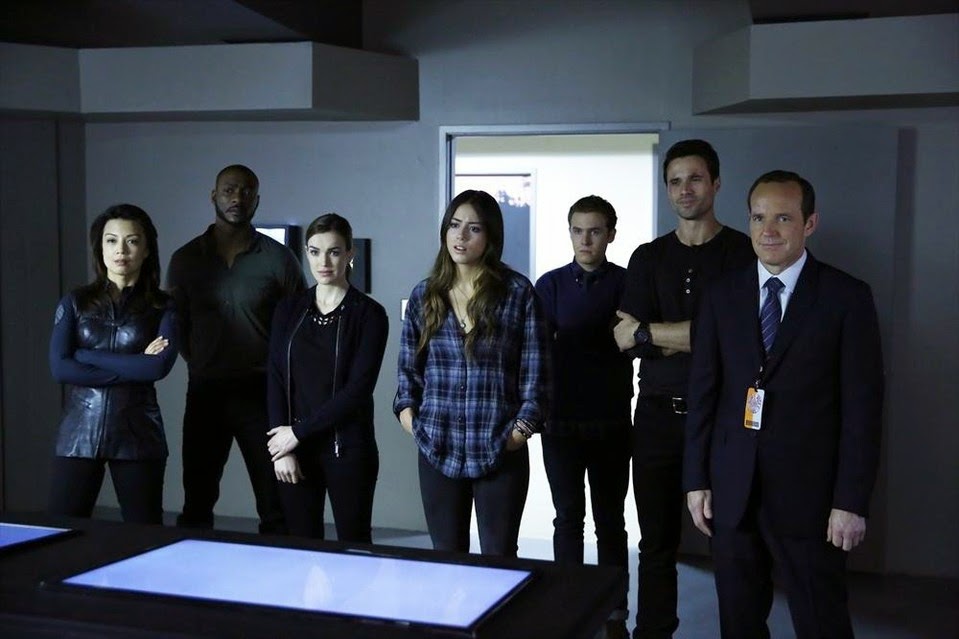 Coulson's Alive!
His concern about escaped, super-powered prisoners is general, and he intends to track down as many as he can, but his motivation is also very specific and personal. He immediately has Koenig check for the obsessive physicist and knows he'll go after Audrey. May knows the history of Coulson and Audrey and tries to talk to Coulson about it, but he refuses to confide in May, or listen to her. He tells her that it was wrong of her to withhold the answers from him, the support group is broken, they're no longer friends. He tells her to leave. Coulson's concerned for Audrey, but also holds himself away from her aware that the revelation will change her life and that he can't offer her anything stable. He loves her (though he never says it) but his loyalty is to Shield, especially now. At the end Coulson admits that he was too harsh to May and should forgive her as he hopes Audrey might some day forgive him.

The Cavalry
May tries to talk to Coulson about Audrey, but he won't have it. She explains herself again, insisting that she had orders and he would have done the same, but he won't have it. Just as Ward is preparing to take her out May leaves, she knows she isn't wanted. She's tried to apologise and explain but he won't see past her betrayal and now she's hurt. She doesn't want to stay where she's not wanted. She leaves with purpose, though we don't know what she intends to do until the end. Her relationship with her mother seems interesting. Melinda has called her mother as a last resort because she needs someone she can trust, but she's scolded for not saying thank you straight away. Mother May seems almost smug when she points out that her own agency hasn't fallen apart.

Grr, Ward
Ward's lies and ability to think on his feet allow him to pass orientation by increasing the legitimate pain he's already in to skew the results. When Koenig is suspicious and pulls a gun Ward admits to having feelings for Skye, this apparently guilty/embarrassing secret prompts Koenig to pass him. Ward doesn't have to take out May as he plans, which is lucky for him. He takes Koenig out before the images from the Fridge are revealed. He admits his feelings to Skye, and his vulnerability about her not liking the real him seems genuine, though he mentions his terrible family history, rather then being evil. When Skye finds blood on his neck he covers by pretending one of his cuts has reopened and goes to clear up, cleaning his garrotting wire at the same time. When he can't find Skye he gets suspicious and goes after her, checking on where he hid the body. He comes up with convincing lies for why Skye needs to come with him and decrypt the hard drive, pretending he's spoken Fotz about the mission.

Science Hermione
Simmons patches Ward up. In orientation several of her answers are similar to Fitz's. When asked which one thing she would choose to have with her when alone on a desert island she thinks for a moment and chooses the TARDIS. This is why I love her! She tells Audrey they're from the CIA (her English accent no doubt selling that lie). Simmons asks Fitz why he has such a problem with Trip and vouches for his loyalty again. Fitz pretends he's having trouble with the changes.

Monkey Boy
Resentful of Trip, Fitz tries to use his intellect against him, but Trip is fairly smart. Fitz complains to Ward about Trip, and Ward suggests it may actually be about Simmons and that if Fitz wants to tell her something he should soon. Fitz pretends he has no idea what Ward is taking about, though in the rest of the episode it's clear Fitz is thinking about/noticing Simmons more. I'm distinctly meh about this subplot. There's nothing wrong or unusual with Fitz and Simmons being close, platonic friends. This isn't the first time Fitz has been put out when he sees Simmons notice another man, it eas subtle before, but he's downright hostile to Trip. Plus it seems like Fitz is suddenly interested in Simmons (whose been by his side for years) because he sees someone else likes her, making me uneasy that it's a possessive thing. I get that he's not very in touch with his feelings and would cling to Simmons with all the changes happening, but it feels like a bit of trope to me. He nearly says something to her after the operation, but doesn't.

Hacker Girl
In orientation Skye reveals how much Shield means to her, and we discover the name she was assigned at the orphanage. Skye convinces Koenig to let her hack the NSA satellites, teasing him for his play-it-safe attitude. When Ward says May has left Skye is quick to think the worst of her, assuming she didn't care enough to say goodbye. She reassures Ward he is a good man when he opens up about himself and his background. When Skye find Koenig's body she's terrified and freaks out a lot, frantically searching the bathroom for anything to help. However she keeps her head enough to conceal what she found. She's able lie to Ward and even kisses him to distract from her nervy behaviour. This is where Skye became more interesting (previously it seemed like her circumstances were more interesting than she was) and though I like her character much more on this rewatch, she really comes into her own in this situation. It's so interesting not only seeing Ward's lies, but seeing Skye try to react to them and behave normally while trying to figure how to escape.

Weirdness of the Week
The 'orientation' chair is a bit intense. Koenig says Fury wanted something that Black Widow couldn't crack, but of course the Director wouldn't tell anyone if she did or not. Ward is understandably wary of it, but he seems to trick Koenig more than the machine.
Darkforce is some weird physics thing and it gave an obsessive physicist the power to absorb energy, meaning he can knock out electronics, kill people and stop bullets. While in the Fridge it seems he wasn't being contained but was being trained to use his powers, possibly due to Hydra influence? Now he can shoot out beams of cheesy-looking dark energy.

Villain of the Week
Ward - evil, bastard Ward. Also the obsessive physicist, he's not particularly impressive or nuanced, but the focus is on the team and what they're going through.

SHIELD LOL
Coulson: Nothing bad ever happens when you work with something called Darkforce

Koenig: You want to hack the NSA? ... Why poke the bear, the bog scary waterboarding bear?
Skye: Oh, I thought you were a comms agent, not agent of playing video games while hiding in a bunker.

Coulson: Who did you say created this technology again?"
Fitz: Bruce Banner
Coulson: Then I'm sure it'll go off without a hitch. 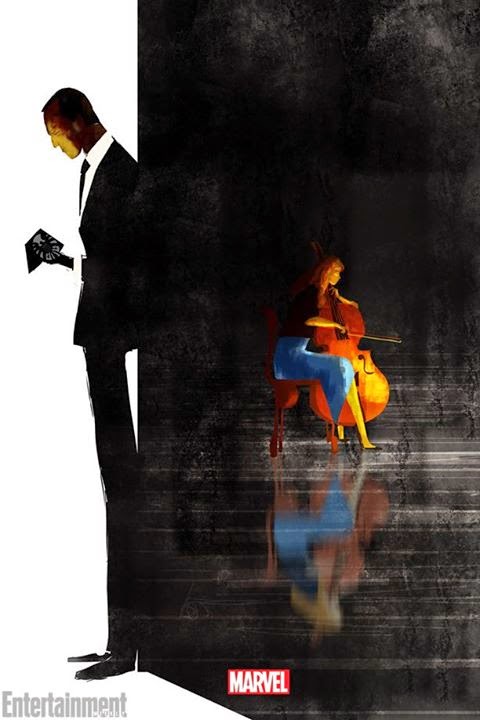 Koenig mentions that he and his brother (singular) used to give each other nicknames. Eric was called "lightening foot". We're going to learn that the Koenig's are an odd family. There are at least 2 brothers (Bill and Sam) but are they brothers? The Koenigs seem to be identical and in series 2 it's a running joke that no one knows what they are and they mess with people about that. 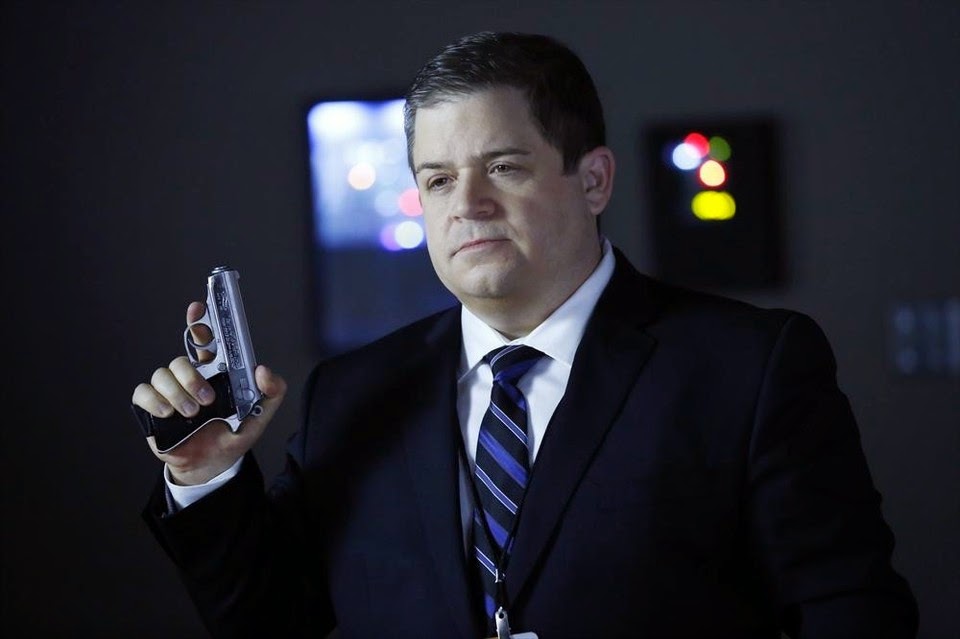