What Happens
Skye is rushed to a medical facility after being shot in T.R.A.C.K.S., but the doctors can't save her. Coulson is determined to save her, so he reveals the truth about his death to Ward, Fitz and Simmons, tasking the team to find out what was done to him. A Shield team arrives to take Quinn into custody. Agent Garrett, an old friend of Coulson's and Ward's former SO, boards the plane with his man Agent Triplett. Coulson won't hand Quinn over and Garrett realises that the team are hanging on to him because of Skye. Garrett and his team have been tracking Quinn for a while and he convinces Shield to let him interrogate Quinn on the plane. Garrett has a strong interrogation method and mocks Quinn for being duped by a charlatan Clairvoyant. Fitz and Simmons understand little of Coulson's file, and Simmons discovers the names and places in the file are falsified. The doctor that Coulson spoke to in The Magical Place has disappeared. Fitz sets up a virtual display and gets hold of all of Shield's admin files, he and Simmons track through them to find any clue about where Coulson was treated. They find a map of a secret mountain bunker, codenamed Guest House. It isn't an official Shield facility so Coulson, Ward, Garrett and Fitz go to ask for entry but are prepared to fight their way in. This turns out to be necessary, and when they've taken out the guards they find the mountain is rigged to explode. Coulson and Fitz go to the labs to find stuff to help Skye, they find a drug called GH325 that healed Coulson's heart. Fitz races back with it, but Coulson spots a door labelled T.A.H.I.T.I. and investigates. On the plane Skye keeps crashing so Simmons, with May and Triplett, tries to keep her alive. Running out of time Garrett finds Coulson traumatised in a corridor, he screams that they shouldn't give the drug to Skye. They race back to plane, barely taking off as the mountain explodes beneath them. When Coulson gets to the med room Simmons has already injected the GH325 into Skye, and it restores her. Garrett and Trip take Quinn into custody. May asks Coulson why he isn't happy about saving Skye, he flashes back to finding the secret of the GH drug, it was drained from a dead, blue alien in a tube. He tells May he was remembering his treatment and was worried she would suffer like he did. To lighten things the after-credit scene has a woman in odd clothing steal a newlywed groom from his bride, compelling him with her voice. 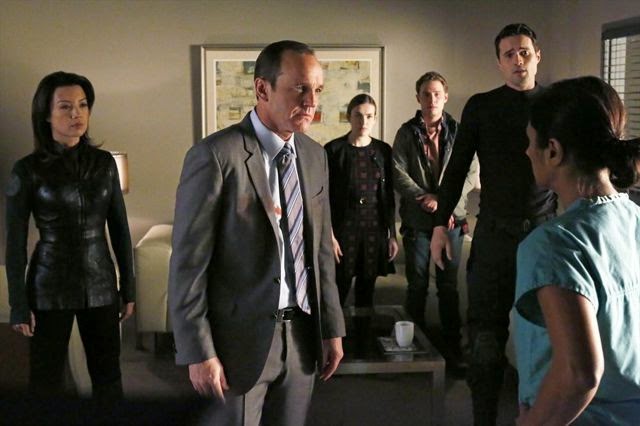 Coulson's Alive!
Like Fury previously did for him Coulson is determined to move heaven and Earth to save Skye, though Fury himself is unavailable. When Garrett arrives Coulson lets his old friend believe that he's holding Quinn for vengeance later, when everything turns out well Coulson says Garrett leapt to that conclusion, but it's not clear whether Coulson would have done what Garrett assumed. Of the pair Garrett seems like more of a maverick, though we know Coulson used to be different and that in his quieter way his trust in the system has been badly shaken. Coulson tries to get into the mountain base by asking nicely and appealing for help, though he's fine with using force when that won't work. The guard seems to recognise Coulson, who concedes that he may have spent some time there before. Coulson is terrified and shaken by what he finds, the substance that saved him, that's about to be put into Skye, was drained from the torso of a big blue alien, you understand his reaction. When I first watched this I was on the edge of my seat from when Coulson is found in the corridor until after we discover what he found. All I wanted to know was what he saw that scared him so bad. Coulson won't tell May this secret, I expect he's still wrapping his head around it.

The Cavalry
I the hospital when everyone is blaming themselves fr what happened to Skye May tells them to blame Quinn. When the doctor breaks the bad news May immediately goes and brutalises Quinn. It's not pretty or right, but it does show that Skye is now included in the group that May feels protective of. She knows tries to find out what's up with Coulson at the end, knows he is again hiding something that he almost can't bear, and it's hurting him.

Meh, Ward
Ward joins in with the pity party at the start of the episode, but in the previous episode he said he didn't blame himself for what happened to Skye. He keeps saying she shouldn't have been there and I feel like he kind of blames Coulson, though I could be reading into something that isn't actually there. Garrett was Ward's former SO and trainer, and it sounds as though they have a lot of history. He and Trip are friends, but when it looks like Garrett and Coulson meant order them to do different things Ward and Tripp start fighting, because they're silly boys.

Science Hermione
In the hospital, after Skye has been handed over, Simmons suddenly feels like she's been a mess. Now her role is over she can look back over her performance and see how scared she was, but Coulson's reassurance is kind as he points out she was wonderful. Without her Skye would have certainly died in that villa. She is amazed by Coulson's medically impossible reveal and frustrated by what's in Coulson's file, she can only understand 70% of it which must mean it's really out there. While waiting on the plane Simmons keeps watch over Skye, accompanied by Trip, who asks about what Skye means to her. Skye keeps crashing and Simmons has to work to keep her alive, never certain it it's what she should be doing, the emotional strain is heavy. Simmons points out that she and Skye have only known each other a few months and are really different, but yet Skye is important to her. Trip gives her space for her worry, but also says understanding things. Trip is attracted to Simmons, but there's no male gaze, no particular shot of him noticing her, no change to the way Simmons is portrayed. His bearing just shows he's interested in her and what she's saying. He doesn't do anything flirty, or make any kind of move, because it'd be really appropriate given the situation, it's not even clear whether Trip fully realises he likes her, Simmons certainly has no thought in that direction. Garrett notices (and makes it overt at the end by telling Coulson), but it's not so unusual for 3rd parties to notice attraction to before the individuals realise it themselves. It's really, really well done, subtle but also actually nice. When he compliments her it's about her performance as a doctor, he admires and respects her and that's all part of the attraction. Now that I've seen this I wonder why ths kind of thing isn't in more TV and film, because it's amazing! 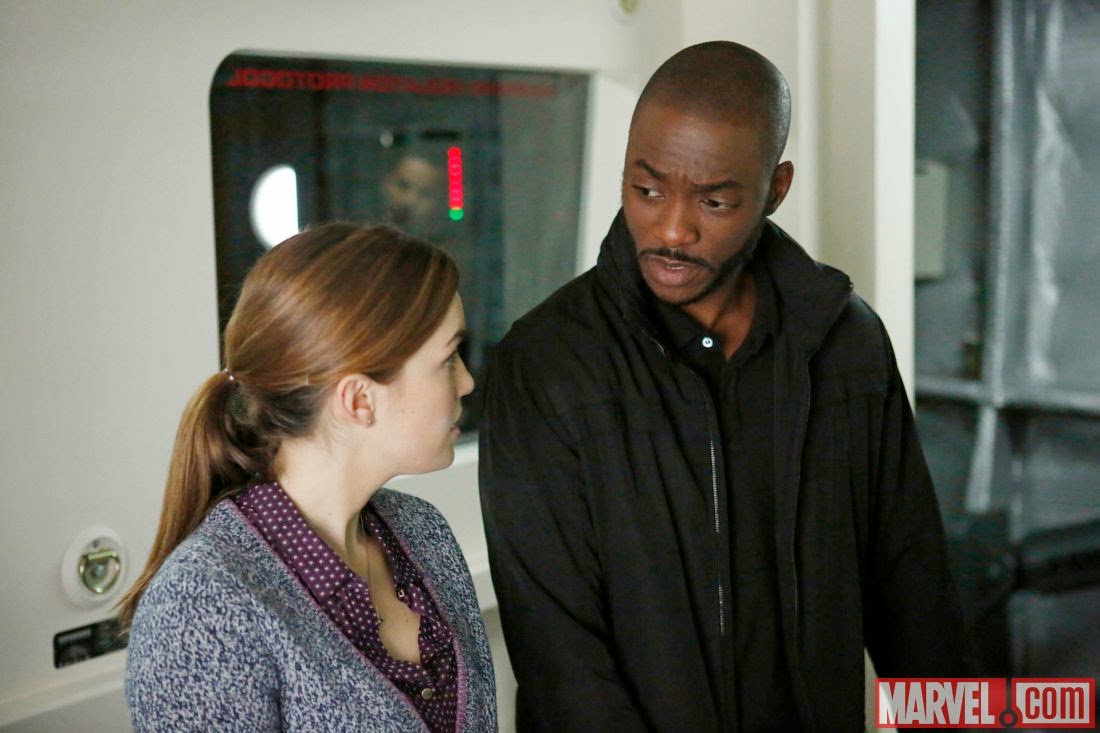 Monkey Boy
When Coulson hands over his Death and Recovery file Fitz is the one that points out it's illeagl for them to read it, so Coulson states that he doesn't care about their clearance level any more, this is a man done with protocol. Fitz sets up the echo-chamber, a kind of virtual 3D holo-display/room to view data. He's also used contacts to get access to all of Shield's paperwork so he and Simmons can trawl the files to find some clue about where Coulson was taken. This is more visually interesting than watching people search through files and folders on a flat computer screen. Fitz is the one who realises that the Gues House file isn't encrypted but, when tilted, is a map made of scrolling numbers (quite why such a thing would be there is clearly a question we aren't supposed to be asking, again it's more visually interesting than coordinates). Fitz doesn't quite get Garrett's morbid humour on the mission, but he acts with bravery on the mission.

Hacker Girl
Lying in a hospital room (which is inserted into the plane with some kind of fancy forklift), the focus of so much effort and emotion. At the start the doctor says her family should be contacted, and Coulson rightly points out that the team are her family. The moment might have been sappy if it wasn't sad.

Weirdness of the Week
Quinn tells Garrett that the Clairvoyant gave him detailed information on how to avoid and take out his team members. The whole Guest House set up is odd, it's on Shield's files, but obscurely. It isn't a regular Shield facility, in fact seems to be at a remove from Shield, but Fury quietly used it to save Coulson. The place does have half of a big blue (presumably dead) alien in a tube and is harvesting its fluids for a drug that has regenerative abilities. That's pretty weird.


Villain of the Week
Quinn, still. He's been tracked by Garrett's team and had three of his men killed, though Garrett says it's odd that Quinn would kill someone himself, he usually pays people for that. Quinn says that the Clairvoyant ordered him to shoot Skye, which ties in with what he said after he did it, so that Coulson would be forced to find out how he was resurrected. That is apparently the one thing the Clairvoyant can't see.

SHIELD LOL
This isn't a funny episode. Garrett seems jovial and sarcastic and mocking a lot, but he's got more edge than Coulson and his manner is part of that. My God, It's Full of Spoilers (Really big spoilers for series 1 and 2)

OH LOOK, IT'S GARRETT.
Funny how the "everything" the Clairvoyant knows relates specifically to people close to Garrett, like Garrett's team, and his old friend Phil. He is the Clairvoyant, which makes it funny when he mocks Quinn for believing in a charlatan's psychic powers and is constantly scornful of him. Garrett uses the Clairvoyant persona and its mystique for effect, he doesn't believe in anything. I really wanted to know if Quinn knew who Garrett was while he was interrogating him. I tried to analyse all the exchanged looks, but I can't tell.

Garrett tells Coulson he should see the stuff he's sweet-talked Ward into doing - what like being an evil, betraying bastard? And also shooting a dog. I was so happy with this reveal cos Ward was super dull and annoying and I felt vindicated in my dislike of him. Also it made him interesting.

When the guard thinks he might recognise Coulson is it because he was a patient, or is it because he used to run the Guest House? Are all of Coulson's hidden memories about this place? The guard's recollection seems confused, so his memories might have been altered too.
Posted by Catherine Hill at 13:36