Power corrupts and absolute power makes you call your Commanding Officer by their first name, and that is Just Not On. 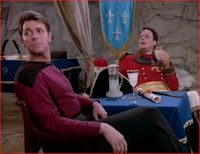 A Federation colony needs urgent medical help, the Enterprise speeds to their aid. A familiar flaming-ball-turned-90s-screensaver pursues the ship through space, Q is back! Q is interested in the Enterprise bridge crew, especially Riker, and tests them with a game. Picard is trapped on the bridge while the others appear in a Napoleonic-themed desert. Q wears a great French Army marshal's outfit, including an awesome hat. Tasha is sent to a penalty box for arguing, and ends up back on the bridge with Picard.
Q taunts Picard and they have a Shakespeare quote-off. In the game-space Riker and the bridge crew face off against costumed creatures with phaser rifles. Q cosplays as Data and freaks Riker out, before trying to recruit him into the Q continuum. He offers Riker advanced powers and beams more crew (and Wesley for some reason) into the game. Worf and Wesley are killed by bayonets, so Riker uses his new powers to resurrect them and take everyone back to the Enterprise.
The ship returns to its rescue mission and Picard makes Riker promise not to use his new powers. On the colony few survive and Riker is sad about a dead little girl but doesn’t resurrect her. He blames Picard and rants, then calls the crew together. Riker decides he’s going to give everyone the stuff they want: Wesley is aged 10 years, Data refuses a shortcut to humanity, Geordi is given sight, and Worf is freaked out by a growly Klingon lady. Everyone rejects Riker’s unasked for gifts and he sees the error of his ways. After Picard points out Q has failed thunder sounds and Q is whisked away.

Riker: lover, adventurer, middle-management
Riker shows his leadership skills in a confrontation with Q and combat in game-space. Q tries to headhunt Riker in a private tete-a-tete that’s slashy as hell (Q really wants Riker). Riker is given powers and saves his crewmates, but promises Picard that he won’t use the power again as Picard feels it’s too much for a human to handle. When he can’t save a dead little girl on the colony Riker rails against the promise and calls everyone to the bridge. Picard frames it as an intervention, though so far Riker hasn’t done anything other than have a bad attitude.
For a while Riker is basically the Wizard (but for reals, not just some con artist from Omaha) and decides to grant everyone’s wishes, without their consent. When everyone else refuses to take the easy way he offers he learns the lesson, despite temptation and protest from Q. 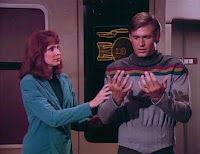 Q whisks Wesley from class (he still does those?) into the game-space, despite never having met him and having no reason to do this. Wesley is stabbed right through with a bayonet, which must have pleased fans no end after last week. Then Riker resurrects him when he saves everyone else.
On the bridge Riker’s gift to Wesley is 10 years in an instant. Apparently he knows Wesley best of all and they have long talks, which is new and weird information. Mid-20s Wesley looks nothing like Wil Wheaton, is unsurprisingly freaked out and is perved on by Geordi. (“Hey, Wes. Not bad.”) Wesley refuses this unasked for gift as, like Data, he wants to get to where he’s going on his own.
I somehow doubt that this experience will make him go and play with the other kids more.

Klingon Warrior
We finally get to see Worf do something besides growling, being disapproving and rushing pointlessly to attack. In the game-space Worf scouts ahead stealthily and scopes out the enemy (furry, animalistic creatures in Napoleonic soldier costumes) before returning with info. It seems he does have tactical skills as well as fighting instincts. 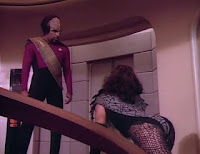 Riker magics up a growling Klingon woman in fishnet tights for Worf. She doesn’t seem like much of a person (has Riker met any Klingon women, what is he basing this on?). She lunges at Tasha, Worf knocks her to the ground then objects, she (and Klingons in general I guess) have become alien to him and he apparently has no place in his life for sex now.
This little piece of roughness makes me think that Jadzia Dax (or perhaps Trills in general) must be tougher than humans, who Worf described as ‘too fragile’ in Justice.
Stage Skills
Picard and Q have a Shakespearean quote-off. Just for the fun of it.
It actually works pretty well, as Q and Picard use Shakespearean dialogue to illustrate points about Man (I think it's meant to be about humanity in general, not just the ones with Y-chromosomes).
Space Trumpets
Whilst fighting in Q’s Napoleonic-themed desert the Space Trumpets play a slowed-down version of the famous chords of La Marseillaise. I found this amusing.
After writing this blog post I may have looked up quite a lot of national anthems on youtube, just to see what they sound like.

Staff Meetings: 2
1. Picard and Riker discuss Riker’s new powers, Picard makes Riker swear not to use them.
2. Bridge crew (and Wesley for some reason) assemble on the bridge to stage an intervention for Riker, who hasn’t really done anything so far except rant.

No Magic Here
Riker gets eons-advanced Q powers, which are basically magic.
He saves his friends, resurrects 2 of them, ages one 10 years, cures another’s blindness, creates a woman for a third and offers to turn an android into a human. He’s like Jesus, the Blue Fairy and a pimp all rolled into one.
Except that given the unlimited nature of the Q powers it all seems a bit small. Picard treats Riker like he’s a megalomaniac, but frankly he doesn’t do that much besides being angry and showing off. He could have magicked the Enterprise to Risa and given everyone shore leave forever. He could have created a giant golden throne for himself and carved a moon in his own image, but he doesn’t.
I suppose it proves that Riker isn’t like Q, but if someone’s gonna go mad with magical power I’d like to see something a bit more mad and magical, but that’s Star Trek TNG for you. Restraint is the better part of valour.*

Death by Space Misadventure
The colony has 504 inhabitants, when the Enterprise gets there only a dozen or so are still alive. That’s close to 500 people dead due to an accidental explosion in a mining operation that becomes an underground disaster.

The End
After failing to tempt Riker Q is summoned back to where he came from by the anger of the Q continuum, screaming as he goes. Data queries why Q, who can control space and time, has such difficulty with them. It is a reasonable question that doesn’t really get answered. Picard suggests humans are more complicated than space and time, which sounds trite (and kind of excludes Worf who acquitted himself well in game-space and was definitely part of this adventure), but that's the lesson we're left with. 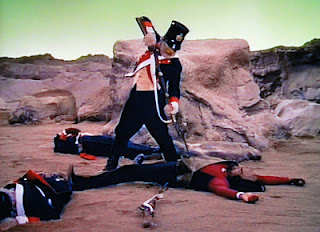 * By 'valour' I mean not changing things in a way that will have repercussions beyond this episode.
Posted by Catherine Hill at 16:09