Episode: s1, ep 7
In this episode we learn just how powerful a starship captain is and that Troi might as well be somewhere else. Saying that the episode is fairly fun, Data is amusing and there's minimal Wesley, so things are looking up.


What Happens
Enterprise is picking up delegates from warring species that both want to join the Federation, in order to take them to the negotiation/peace-making planet called Parliament.* The delegates loathe each other and try to start a tiny war in the corridors. There are various wacky alien shenanigans for Riker and Lt. Yar to deal with. 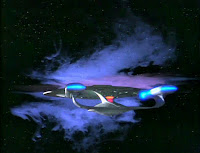 The Enterprise passes through a strange space cloud and Worf is attacked by blue lightning. The blue lightning goes into Dr Crusher, then the helm, where it causes various malfunctions. The senior officers assume there is a saboteur and Picard starts talking about crime fiction, especially Holmes. Engineer Singh is killed by the blue lightning and Data starts pretending he is Sherlock Holmes.
Troi realises Worf and Dr Crusher were possessed and reports this. The blue lightning possesses Picard and takes the ship back to the space cloud. The senior staff discuss the Captain’s odd behaviour and dither. At the space cloud the blue lightning lifeform reveals that it wants to go home and it’ll be taking Picard with it. Picard disables the bridge crew by blasting them with Force Lightning from the consoles, then transports into the space cloud.
After an hour of searching, Riker is about to leave when Troi senses that Picard wants to return. Picard is saved from the space cloud because his pattern was still in the transporter, but he has no memory of being outside the ship.

Riker: lover, adventurer, middle-management
Riker tries to keep the peace between the robed lizard aliens and the furry-faced, bulbous-headed aliens. Along with Lt. Yar he ends up babysitting them including taking away their weapons, telling them off and trying unsuccessfully to get them to stay in their quarters. Basically he’s the straight man of the comical B-plot. 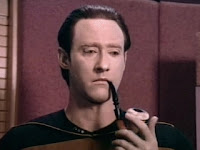 Does Not Compute
Data is told about Sherlock Holmes in one staff meeting and by the next one he’s found out everything there is to know about the fictional detective and has adopted a Holmes persona. This includes smoking a pipe, saying ‘elementary’ and being both hilarious and annoying. No deerstalker hat though.

Counsellor Pointless
Troi’s job is to sense when stuff is weird. This is why she has a chair on the bridge rather than being in her office ready to counsel people. So far she’s able to tell when stuff is weird, but is absolutely no use in actually coming to any conclusions based on this info. In this episode she senses something’s up with Worf and Dr Crusher, discovers they were possessed using hypnosis, and reports this to the senior staff. Then Picard is possessed right in front of her and she doesn’t notice a damn thing.

Poor O’Brien
O’Brien is failing to escort one of the furry-faced, bulbous-headed aliens back to their quarters, when a robed lizard alien comes into the corridor and they end having a fight almost on top of him.

Future Prejudice
While discussing the possibility of sabotage the senior staff assume that one of the troublesome alien delegates could have done it, and therefore must be in the pay of the Ferengi. I’ve not seen any evidence to suggest that the Ferengi would do that, where’s the profit?

Staff Meetings: 6
1. Geordie reports to Picard about Worf’s accident.
2. & 3. Officers meet in lounge to discuss mysterious malfunctions. The difference is whether Data is being Sherlock Holmes (and whether Engineer Singh is alive).
4. Troi reports her theories about crewmembers being possessed.
5. Senior staff discuss Picard’s weird behaviour, then fail to do anything.
6. Riker and Dr Crusher express their concerns to Picard, but don’t take any action, thus alerting the lifeform possessing him to their suspicions. This leads to the bridge crew being Force Lightninged.

Death by Space Misadventure
Engineer Singh is killed by the blue lightning lifeform. I’m not sure why he dies since it had already possessed 3 people without harming them and later says it didn’t mean to kill Singh. It certainly didn’t seem to gain from his death in any way.
At least Singh's family can be comforted by the knowledge that his death led to an android adopting a Sherlock Holmes persona in order to (barely) investigate his death. That’ll make the funeral easier for them.

The End
This is the first episode in the series which doesn’t end with Picard or Riker ordering the ship to it’s next destination accompanied by the uplifting sound of space trumpets.
Instead Picard humorously decides to let Riker remain in charge for now after hearing that one of the alien delegates may have been killed (and is soon to be eaten) by other alien delegates. Apparently this very amusing. 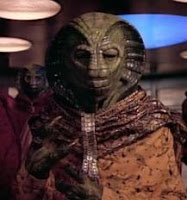 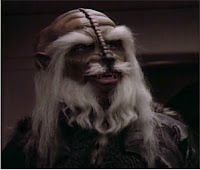 *It doesn’t sound like any version of Parliament I’m familiar with.
Posted by Catherine Hill at 16:36