Where No One Has Gone Before

Episode: s1, ep 6
This episode takes what would've been an interesting look at the edge of the universe and metaphysical ideas, if it hadn't been a vehicle for confirming Wesley's Mary-Sue status.

What Happens
The Enterprise is having a series of Warp Drive Engine tests from the arrogant Mr. Kosinski (and his alien assistant) despite Riker's misgivings. Wesley watches what Assistant is doing and even suggests changes, the alien is impressed by this. The Enterprise goes really, really fast, and Assistant starts phasing in and out, something weird is happening. The ship goes impossibly above Warp 10, so Picard orders a full stop. The Enterprise has left the known galaxy and arrived in the galaxy of sparkly objects. It would take 300 years to get home at normal speeds.
There is much discussion and though exploration is tempting Picard orders Kosinski to try and get them home. Something similar happens this time and there is much shiny zooming. It’s clear (to Wesley and the audience) that Assistant is really running the show, but the effort exhausts him. When the ship stops it’s in a blue place with floaty lights, which seems to be the edge of the universe. The crew start having hallucinations, often to do with childhood memories, dreams or fears, which become real. Wherever they are it’s clear that thought and matter are closely related.
Wesley convinces the adults that the exhausted Assistant knows what is going on. The alien explains that he is called the Traveller and he was going from ship to ship exploring their reality. He didn’t mean to bring them so far and though he’s ill he will help them return. In private the Traveller tells Picard that Wesley is Very Special and must be encouraged. The entire crew thinks good thoughts at the Traveller so he’ll be strong enough to take them home. It works, but the Traveller phases out during transit. Picard orders Wesley to the bridge and makes him Acting-Ensign.

Fringlish
In a corridor Picard sees his dead mother drinking tea. She is clearly French, with an accent and everything.
Management Technique
Picard seems to think he can order the crew’s thoughts. When he sees a crewmember has created fire he impatiently tells him to put it out in his mind. Calmly talking about water would’ve been more helpful and reassuring.

The Boy/Mary-Sue
The Traveller identifies Wesley as a savant, apparently he is to propulsion and space travel what Mozart was to music. This is after Wesley both understands the alien's Warp Drive techniques and is the only one to notice that the Traveller is doing all the work. When they arrive at the edge of the universe Wesley swiftly comes to a metaphysical conclusion about time/space/thought that the Traveller tells him is dangerous. Wesley says he is friends with the Traveller and protests when Picard orders Dr Crusher to keep the alien conscious. He also shows some moxie and points out that he has a name, and isn't just 'the boy'. This actually impressed me.
The Traveller secretly tells Picard that Wesley is special and needs encouragement, but he doesn’t want Wesley or his mother to know yet, as that could change how he turns out. Picard makes Wesley an Acting-Ensign and orders him to learn all about the ship before he goes to Star Fleet Academy. Wesley's dreams have come true and the audience groans.
This episode explains why Wesley knows more than trained engineers, why he’s so interested in space engines, why he probably has trouble relating to people his own age, and why he gets special treatment. I’ve been thinking of Wesley as highly functioning, and it looks like that was a fair assessment. Of course knowing the reasons doesn’t make him less insufferable. At some point could this programme for grown ups be less about a teenager who is automatically better than everyone else?

Klingon Differences
Worf hallucinates a hairy, spiky warthog-thing, which is apparently the Klingon equivalent of a housecat. It's kinda cute. 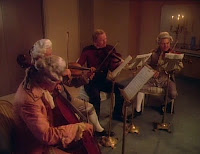 Random Crewmembers
The hallucinations seem to affect the whole crew, and we see a few interesting ones. There’s the Georgian string quartet in the canteen, a crewmember being a ballerina in a cargo bay, and 2 crewmembers running in terror from something we don’t see.
Apparently Geordie isn’t Chief Engineer, despite being on the bridge and going to the staff meetings. The Chief Engineer is a Scotsman called Argyle, do they have to be Scottish, is that a rule?


Humans aren't so great
The reason there aren't any historical reports of encounters with the Traveller or his kind is that humanity (and presumably other Federation races) have only recently become interesting enough to bother visiting.
Well that's us told. 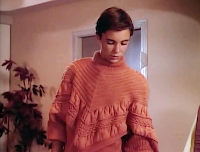 Future Fashion
Wesley is wearing what appears to be an orange jumper that once had aspirations of being a poncho, but it didn't quite have the nerve to really go for it, so settled for being a jumper.
Hopefully once he's Acting-Ensign he can wear some sort of uniform and look like less of a twit.


No Magic Here
The edge of the universe is where magic comes from!
Mr Kosinski doesn't believe it at first 'you're asking us to believe in magic', but what you think becomes real. Magic!

Space Trumpets
The first time the Enterprise goes above Warp 10 (which doesn’t make everyone turn into strange little creatures because that Voyager episode apparently doesn’t count) the displays flash and the engine lights go crazy but we don’t actually see the ship going fast. Luckily the music is there to tell us that it is all very exciting.

Staff Meetings: 1
Bridge crew and Kosinski discuss the situation and how to get home.

The End
The Enterprise returns to where it was and very little of substance is learned about the sparkly galaxy, the edge of the universe, or the Traveller. Wesley is made Acting-Ensign, so we can stop questioning why he's hanging around in the operational parts of the ship and simply be annoyed by his presence. But it's OK cos he'll be sent off to the Academy soon ... Right?