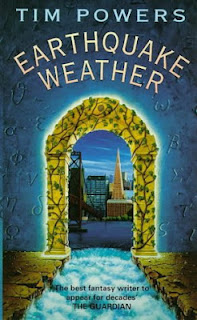 Sid Cochran lost his wife in a strange incident on New Years Day, a couple of weeks later he checks into an asylum. There he meets Janis Plumtree, a woman with multiple personalities and a strange fondness for him, who claims to have killed a king on New Years Day. After an earthquake coincides with strange events in the asylum Cochran and Plumtree escape from the clutches of a doctor who doesn't seem to have their best interests at heart. Meanwhile Scott Crane, deceased King of the West Coast, is taken by his old friend Arky to the supernatural household of Angelica and Pete Sullivan, and their gifted foster son Kootie. When Cochran and Plumtree are drawn to the others a plan is formed to seek the goodwill of the God of the Vine and resurrect the dead king. However their is mistrust among this group and various supernatural dangers lie ahead.

I didn't enjoy this book as much as I did The Anubis Gates and Declare, which is not to say that it isn't an excellent book, I just thought the overs were better. Set in and around San Francisco in 1995 it has many of the hallmarks of Powers' other books; magic existing around everyday life, powerful beings with their own rules, antagonists who amorally use the supernatural for their own ends, and protagonists who are simply trying to set something right. In this book the supernatural is brought up and discussed much more matter-of-factly than in his other works that I've read. All the characters besides (apparently) Cochran have well-established backgrounds in dealing with magic, ghosts and the supernatural. The magic in this book is much to do with ghosts, which are not only spirits of the recently deceased, but also parts of people's consciousness. The magic seemed weirder and more freaky than in the 3 other Powers books I've read, but those were all historical so there was already a sense of a world at a remove. There is also a powerful background being of the type seen in Declare, it is Dionysus, come to America with the Californian vines. There are many references to Shakespeare's Troilus and Cressida, Dickens' A Tale of Two Cities, and types of wine; I'm not familiar with any of these things but still found the book intriguing and enjoyable.
I quite liked the characters and was glad that Plumtree (or parts of her, at least) proved to be a major player in the plot. I'd noticed that the main female character in On Stranger Tides was really passive and even in Declare Eliza was mostly a love interest. 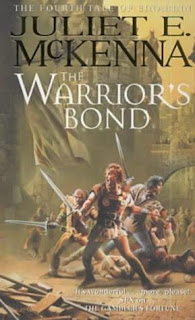 Ryshad (whose sections are told in first person POV) has just been made a Chosen Man of the noble house he serves, but isn't used to the change in station and continues with a hands on approach to his duties. Temar has come to the capital of the Empire he left many generations ago and finds that he is a stranger in this new world of gossip and fashion and plotting. However he must take on new responsibilities and adjust to the modern ways of doing things if he is to protect his people in the distant colony.
This book takes place at roughly the same time as the previous installement (The Gambler's Fortune) and follows Ryshad and Temar as they try to figure out how to live with the new paths their lives have taken. From a geographic point of view it's the least ambitious book as it takes place entirely within Toremal, the capital city of the Tormalin empire. There's no travelling or questing in this installment, but there's still plenty of peril, intrigue and challenges facing the heroes. The social and political positions of the characters are examined and though there is plenty of combat and scheming there's a greater sense of being amidst wealth and civilisation than the travel-heavy stories in previous volumes.
I enjoyed the different tone of this book. Instead of seeing several different nations and peoples the story is focused on the Tormalin Empire, especially the nobility. It is interesting to see the modern nobles through the eyes of those who lived centuries earlier. I admire the author's way of adding depth of history to her world, and here it is more evident than in previous volumes.
Posted by Catherine Hill at 17:55