Episode: s1, ep 8
Things were going OK, it was starting to improve and then I watched this. Oh dear…
The episode centres around Wesley (at least he's not being smart) and tries to portray a sexually liberated utopia that just ends up being horribly embarrassing.

What Happens
The Enterprise has dropped off some human colonists and is visiting another planet in the same solar system. The planet appears to be a peaceful, free-loving utopia, perfect for those who like blondes and dislike underwear. The away team (and Wesley for some reason) start having fun, before they discover that the planet is governed by a strict and arbitrary law system that means death is the only punishment. Wesley steps on some flowers and is almost executed on the spot.
Meanwhile the Enterprise sees something inexplicable in orbit and loses communication with the away team. A mystical bubble arrives and knocks Data out. The bubble has a booming voice and is concerned about the Federation’s intentions toward the simple blonde people it refers to as its children.
Picard goes to the planet to intervene for Wesley’s sake but refuses to transport him away because of the Prime Directive, even though the blondes hopefully point out that they’d be unable to stop him. He takes a blonde from the planet to the Enterprise where she fearfully identifies the thing in orbit as God. God is angry they’ve taken someone off the planet and watches closely. Apparently God has found out all about the Federation from Data and will punish the entire ship if they break their own codes.
On the planet there is much eloquent discussion of law and justice, and no one appears to have any feelings, besides Beverly who doesn’t want her son to be executed. Picard makes a speech at the sky. God apparently agrees because the crew (Wesley included) transport away and leave without any further interference.

Riker: lover, adventurer, middle-management
Riker is obviously thrilled to be on the planet of free-lovin’ and engages a disapproving Worf in a conversation about love and ‘plain old basic sex’. Then again he doesn’t actually seem to get any, and despite his reputation hasn’t been sexually active on screen so far. I guess the beard increases his allure later?
Riker runs to Wesley’s rescue and punches out the guy who tries to give the kid a lethal injection. William Riker: man of action.

The Boy
Wesley is sent to play with some people his own age  –something that apparently never occurs to anyone while he’s on the Enterprise. He breaks a box of young plants, while in a mysterious and arbitrary punishment zone, and is almost executed. I’m not sure I’d be that bothered if it weren’t for his mother.
Beverly Crusher is so far either the Chief Medical Officer or Wesley’s Mum, however even without plotlines to herself she already has a wry sense of humour and is one of the most capable crew members. I like her and I don’t want to see her suffer.

Planet Of… Stereotypical Blondes
The upside of this planet is that it appears to be gender equal, at least insofar as sex, flirting and the prohibition on underwear are unconcerned. The downside is everything else.
Everyone is blonde (and therefore white), incurious and promiscuous. Everyone moves at a bouncing run and no one wears anything under their small white garments. The entire place looks as though soft core porn is happening just off screen, there’s lots of rubbing and kissing. Also no one looks like they’ve gone far into middle age (I initially assumed there was some kind of Logan’s Run situation going on – it’s not mentioned either way).
I’m not a person who enjoys eye-candy (in either gender), it’s often so clumsily done that it makes me eye-roll, so having a planet of blatent eye-candy is annoying to me. These scenes are trying so hard to be sexy that they end up being hideously embarrassing.

In Space No One Cares About Your Emotions
Beverly is, unsurprisingly, upset that her son might be executed. Picard says he’ll tell her in person, but then doesn’t, so she finds out from the away team’s report. When she tries to talk to him about it he cuts her off so he can talk about God with a Blonde. When Beverly is finally allowed to express her feelings Picard grimly says that he feels the same way and goes on about how hard this all is on him. Jerk.
Later, when Beverly is allowed to see Wesley, she’s the only one (including Wesley) who seems to have any emotional involvement in the situation. Everyone else is concentrating too hard on their important-and-meaningful speeches to actually emote. 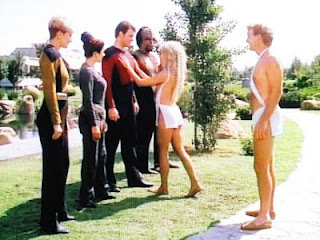 When the away team (and Wesley for some reason) arrive on the planet and are greeted by the overly-friendly Blondes. Of course all the hugging, kissing and nuzzling is purely heterosexual. Even Troi seems kind of embarrassed, and given the way her mother is that's saying something.

The Prime Directive is a Harsh Mistress
Picard can’t beam Wesley away from the ridiculous death sentence, even though the Blondes twice suggest this as an option, because the Prime Directive doesn’t allow it. If he breaks the Prime Directive the orbiting God will see this as a sign that the Enterprise crew are untrustworthy and may destroy them all (although God itself never actually says this). It seems to be a choice between Wesley and the rest of the crew and one assumes Picard will have to find a clever way around it. Instead Picard delivers a short speech to the sky, Riker adds a one-liner, after which God is apparently convinced and allows Wesley to be beamed away. Just as the Blondes suggested earlier, twice.
So they did break the Prime Directive… but it was fine… because...something?

I’m not quite sure what the Prime Directive has to say about casually visiting a planet that clearly doesn’t have warp drive technology, not disguising the fact you aren’t from that world, and actually taking an inhabitant on board your star ship. That seems like the kind of thing that’s against the rules, but what do I know?

No Magic Here
God is a multiple, displaced entity that isn’t entirely real, which is why it doesn’t seem to be fully there. It manifests as a mystical bubble and flies through the Enterprise, its voice is rumbly and terrible. It lands on Data’s forehead and makes him fall down (which is funny) before taking all the info it can. It can block the Enterprise’s communications and transporters at will presumably because it’s very advanced, not because it’s actually some sort of God. Even though it’s very powerful, exists in multiple places and has worshippers.

Staff Meetings: 1
Data briefs Picard on what he learned when the God Bubble sat on his forehead, they discuss values. Then Beverly interrupts because she wants to see her kid and no one’s really spoken to her about the whole execution thing.

The End
Picard addresses the orbiting God and says they’ll remove the human colonists from the star system if it gives them a sign. It disappears, which is taken as a sign. They leave, and I am baffled.