I can actually remember seeing this episode as a repeat on BBC2 when I was a kid.* I remember the bits with Minuet and the holodeck, I remember that blondes don't go with jazz (is this why I don't like jazz?), and Geordi helping Data to paint, but not much else.


Another pretty good episode where Riker turns on the charm (that's 2 in a row). There's little to fault in the SF concept, though it does seem a bit dated now, and the power of the holodeck is further explored. 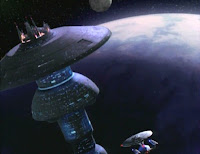 The Enterprise is at a starbase to get an upgrade from some little, purple-headed aliens. Riker is told to take time off and seems confused by the concept, so he bothers everyone else while they prepare for their own free time. The aliens enhance the holodeck and suggest Riker gives it a go. He creates a setting and a woman, then plays some jazz trombone in holo-New Orleans. Riker is fascinated by lifelike, holo-woman, Minuet. She's an intellectual curiosity as well as having beauty and charm. Picard arrives and is also fascinated by her, though more from a tech point of view. He asks a lot of questions about her programming and the holodeck enhancements. Riker seems fine with having Picard there, even though he’s definitely a third wheel.
Something goes wrong in Engineering, Wesley (who has been watching aliens work on the bridge – for some reason) alerts Data. Unable to get hold of Riker or Picard, Data evacuates the ship and sends it away from the starbase before it explodes. The ship seems to it fix itself and zooms away, it's been stolen.
The holodeck is completely sealed off, and Picard and Riker have no idea what’s going on. When Picard leaves the holodeck he sees the red alert lights in the corridor, so he and Riker investigate. They set the ship to auto-destruct, because they can’t let it fall into the hands of others (even helpful, purple-headed aliens who were so polite before). They find the aliens in a lifeless pile on the bridge as the Enterprise arrives at the computer-based planet, which also seems to be broken. 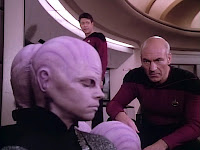 They go to Minuet for answers (she’s smarter than the av-er-age holodeck programme). The planet was damaged and the aliens were dying, so they needed to use the Enterprise, the biggest mobile computer available, as an external drive. The planet crashed because the Enterprise was late for the upgrade, so they kept Riker (and Picard) on the ship using Minuet so that someone could reboot the planet if they were too late. Picard and Riker find the data and restore the files, the Bynars come back to life.
Despite being out of practice Picard takes ship back to base without stalling it once. Riker returns to the holodeck, but Minuet has gone.

Fringlish
Picard and Minuet speak French, something about Paris.
Picard is as intrigued by Minuet as Riker, though his interest is more intellectual curiosity about the programme. Being very self-aware Minuet explains that she accessed the ship’s language programmes/files when she heard Jean-Luc’s name. Picard continues to hang around as a third wheel, Riker doesn’t seem to mind. They keep talking about how advanced she is, as though she isn’t there. It seems rude to me, it is certainly not romantic. 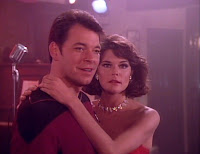 Riker: lover, adventurer, middle-management
I’m not impressed with his flirting, part of the time he talks to her like a person, but then he goes on about how she’s not real, to her face. I guess since she’s a holodeck character, and intended to be a diversion, it’s no surprise she reacts positively to Riker.
Riker likes to play jazz trombone, though the holo-musicians don’t seem that impressed with his skills, they aren't there to compliment him.

Does Not Compute
In a short scene after the Enterprise has been stolen Data experiences doubt. He wonders if what happened is somehow his responsibility. When Geordi tries to comfort him by saying he can’t live on the bridge Data points out that that isn’t true. He says he was negligent and seems to be close to feeling guilty.
Admittedly this scene is here to give Picard and Riker time to get to the transporter room so they can beam to the bridge, but it also gives a nice insight into Data’s thinking and some of the questions facing him in his quest for humanity.

The Boy
Wesley is on the bridge, intensely watching the aliens work. Both Riker then Picard leave the bridge to him (for some reason). I suspect it’s mostly because Wesley is already there, so it’s a good way to keep him from being underfoot. Following orders Wesley watches the aliens slowly, and with more intensity.
Wesley (from the bridge) tells Data there’s a problem in Engineering. When it turns out the ship must be abandoned and cast adrift Data instructs Wesley to set speed and course in order to keep the Enterprise away from inhabited worlds. This emergency auto-pilot procedure seems like the kind of thing that shouldn’t be left to an acting-Ensign. It’s only a plot necessity, but Wesley’s Mary-Sue role is just part of the show now.

Tasha, Worf and some other crew members are going to play sports. Worf takes an unrelenting attitude to winning. Tasha says to Riker “Believe it or not, Worf is developing a sense of humour”, which seems very patronising. He’s not Data, there’s no requirement for him to develop a sense of humour, he probably already has one, maybe it’s just different.
I think the issue is that this suggests that Klingons in general don’t have a sense of humour and that this is a flaw (even though Vulcans are killjoys and no one comments on that). Also I know that Klingons do have a sense of humour, it’s just that Worf is a fairly humourless individual. This probably explains (and is caused by) the way he seems out of place with both humans and Klingons.

Management Technique
Riker must cough (not even discreetly) at Picard, twice, prompting him to thank and congratulate the crew.
Apparently prior to this posting Picard was Captain of a lighthouse.

Continuity
It turns out there is some. Two episodes ago, at the end of Datalore, Picard said something about being late for a computer refit.
The aliens correct the deviation caused by a previous probe, which presumably relates to the events of The Big Goodbye.

Planet Of… The Computer
We learn -in the corridor of exposition- that the androgyne-paired Bynars are the first lifeforms to merge themselves with computers. They almost think in binary and are entirely reliant on the main computer that runs their planet. The Enterprise is taken to their planet (which we never see), by the time it arrives the Bynars on the ship are dying and the main computer on the planet is off, meaning the whole race could soon be extinct.
This plot probably seemed brilliantly technical back in the late-80s. Nowadays one can only wonder why the silly aliens didn’t back their planet up sooner? A crash is always an option, regardless of what operating system you use, especially when your hard drive is orbiting a sun. They might not have had the resources for something like the Enterprise, but surely investing in some kind of mobile computer or remote storage makes sense when your entire species relies on it. Also if you need someone else to restore your data without you, don’t give it a filename that only means something to you (see episode title).

Space Trumpets
As the Enterprise drifts out of space dock and is supposedly cast adrift the music swells and is meant to summon strong emotion.

Something Is Very Wrong
Minuet being friendly and charming to Picard is fine. Her getting panicky when he tries to leave the holodeck just gives the game away.

The End
Despite  being out of practice Picard pilots the Enterprise back to the starbase, making you wonder how necessary all those other folk who hang around the bridge really are? The crew return, Tasha takes the Bynars to the base to await a hearing, which they fully expected. Riker returns to the holodeck and cannot find Minuet, the enhancement was meant as a distraction only, she cannot be recreated. Picard sympathises with Riker over the loss of his fictional woman. 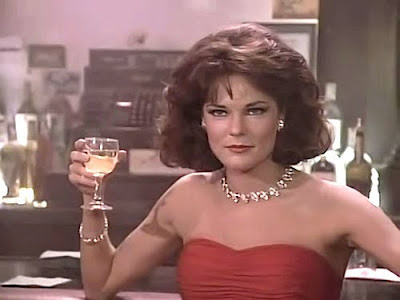 * I'm too young to have watched the original airing, unless BBC2 was years behind showing Next Gen.
Posted by Catherine Hill at 10:36