Episode: s1, ep 23
This is a darker, creepier episode than I expect from The Next Generation, but it's only fitting since it sees the death of a main character. I'm glad I didn't see this as a kid, because I was kinda sensitive and I think the visuals of the monster could've really scared me. 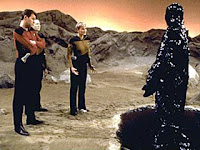 The Enterprise is waiting for Counsellor Troi, who is returning from a conference. There’s a distress call from her shuttle, which has lost control and can’t see its location. Engineering is doing maintenance that means the Enterprise can’t warp to the rescue. The shuttle crashes on a planet and an away team is sent on a rescue mission. They beam down near the crashed vessel and encounter a large black tar-like puddle that moves and blocks their path. They cannot tell what it is or how it moves. It talks in a big, deep, scary voice and a big, dark, drippy thing rises out of it. From the ship Picard speculates that this is what caused the crash. It mocks them, asking why they should let it pass, Riker says something about the sanctity of life, it is not impressed. Tasha tries to walk past it, the monster knocks her flying. The others try shooting it, to no effect. 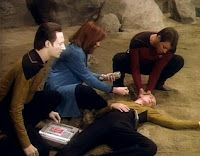 The away team beam to sickbay and Crusher tries to save Tasha, while Riker, Picard and Data huddle in the corner. Tasha doesn’t make it. The tar monster covers the shuttle where Troi wakes up after the crash. Troi says she felt Tasha die and knew that the monster killed her on purpose. It thought it would be funny, but Tasha died too fast. Troi senses that it needs to witness suffering. The monster blocks communications and transporters. Troi can tell that the monster is angry and has an emptiness, it was rejected.
A larger away team beam down whilst Worf and Wesley monitor from the ship. Riker offers to negotiate, the monster taunts them in a juvenile way, but allows them to contact Troi. Troi tries to sympathise with it, but her pity makes it angrier. It sucks Riker into itself and says it’ll kill him if they others try to help or leave. Worf monitors its energy levels and realises that they decrease when it talks to Troi. The monster asks her if she would give herself for Riker, she says yes, and for any of the others. 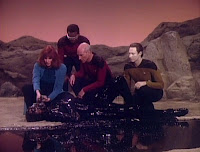 Picard beams down, refuses to deal with it anymore and threatens to leave. It disgorges a very sticky Riker, and the rest of the away team beam back to the ship. The monster says it wants to leave, but Picard won’t help until he can see the people in the shuttle. Picard is whisked inside and tells Troi about Tasha (I thought she felt her die?). Picard speeches at it, which it doesn’t like, it hates his compassion. Picard tries to convince it that it isn’t truly evil. It fears being alone and never finding those who abandoned it. Once its energy levels gets low enough Worf and Wesley beam Troi out. Picard declares the planet permanently quarantined.
The episode ends with Tasha’s memorial service. A pre-recorded (but weirdly faded) hologram of her gives a speech, praising each main character. Good thing no one else was invited to this service.

Oh Captain, My Captain
Picard deals with the monster like he deals with most things, he gets stern and speeches at it. It does not appreciate his oratory and is probably not impressed by him Shelley, I doubt it knows who that is.

Tasha says: “Captain Jean-Luc Picard. I wish I could say you've been like a father to me, but I've never had one, so I don't know what it feels like. But if there was someone in this universe I could choose to be like, someone who I would want to make proud of me, it's you. You who have the heart of an explorer and the soul of a poet.”
So Tasha doesn’t know what having a father is like, then describes what it is like. 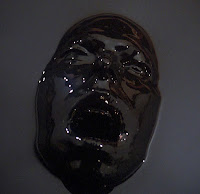 Riker: lover, adventurer, middle-management
Riker tries to talk to the monster at first. Later he offers to negotiate, but turns his back on it and is pulled into it. His silently screaming face is outlined in the goo, which is creepier than I expect from Star Trek.

Tasha says: “Will Riker, you are the best. You trusted me, you encouraged me, and most of all you made me laugh.”
I don’t remember much laughing.

Does Not Compute
The monster initially calls Data ‘tin man’ (a reference Captain America would get, but I’m not sure the monster should know). Later Data refuses to help it taunt Geordi when it removes his visor. When the monster telekinetically controls Data and threatens to make him shoot Picard Data refuses to feel bad, because he knows his actions are not his own. It was foolish to try and make Data feel guilt or fear.

Tasha says: “My friend Data. You see things with the wonder of a child, and that makes you more human than any of us.”
This is actually pretty creepy when you consider, y’know, Tasha and Data.

Troi’s empathy does seem to be useful in dealing with the monster and knowing what it’s doing to her friends. She realises that getting it to confront its anger weakens it.

Tasha says: “Deanna, you are capable of so much love. You taught me without ever having to say a word. I realised I could be feminine without losing anything.”
I can really get on board with the spirit of this message. If you aren’t naturally girly you can have mixed feelings about your own femininity. However in the context of the show this rings sadly hollow, we all know why Troi is there really.

The Boy
Why is Wesley helping Worf? I can understand that he wants to know what’s going on while his mother is on the planet, but otherwise it seems too important –and potentially too traumatising- to have a kid involved with this.

Tasha says: “Wesley, I'm sorry I won't be able to see you grow into the exceptional man you'll be. But your kindness and innocence are ageless.”
Groan.

Klingon Warrior
Worf and Tasha have nice moment at start of the episode discussing her upcoming martial arts tournament. Later Worf wants to stay on the bridge to monitor the situation, rather than go down to planet. This makes sense from a security point of view, plus he probably realises that his instincts would doom him too if he was down there in front of the enemy.

Tasha says: “Ah, Worf. We are so much alike, you and I. Both warriors, orphans who found ourselves this family. I hope I met death with my eyes wide open.”
Tasha and Worf were probably too similar. As a Klingon Worf’s more interesting, and more can be done with his backstory. It’s a shame that as Tasha was a combative character who didn’t have a Y-chromosome, she had to have a traumatic background. 25 years on it’d be nice if we could’ve moved past that. 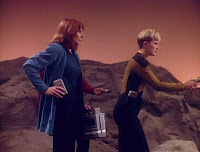 Doctor Doctor
Beverly frantically tries to save Tasha with technobabble, but it turns out (in this instance anyway) that technobabble is not magic.

Tasha says: “Beverly. Your fierce devotion comes from within. It can't be diminished. From you, I have learned to strive for excellence, no matter what the personal cost.”
I can get on board with this.

Blind Engineering
Geordi beams down after Tasha’s death to examine the creature. It telekinetically knocks his visor off and Geordi has to feel around on the floor (like when Velma drops her glasses in Scooby Doo). When Data tries to help Geordi the monster moves the visor away again.

Tasha says: “Geordi, in those moments I felt the most despair, you took my hand and helped me to see things differently. You taught me to look beyond the moment.”
I don’t remember seeing any of this. Also the pun-like use of ‘look’ and ‘see’ is, um, weird. 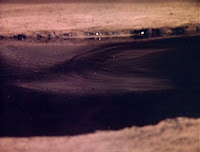 The monster was created by a race “whose beauty now dazzles all who see them.” It was created when they removed all that was negative and destructive about themselves and left it behind. I wonder if we ever find out which race it was?

Space Trumpets
The music in the sickbay while they work on Tasha ups the tension and makes it feel like a scene from a hospitable drama.

No Magic Here
The monster has a wide range of powers: shape-shifting, telekinesis, possibly a weird kind of pocket dimension within itself. 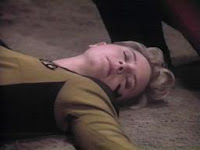 In the observation lounge the key staff discuss Tasha’s death and how to defeat the monster. Picard asks them to put their feelings aside for now.

The End
After the service Data and Picard hang back. Data says he doesn’t understand the ritual; he’s not thinking of Tasa, but of how much he’ll miss her. He assumes he’s misunderstood, but Picard tells him he’s got it. 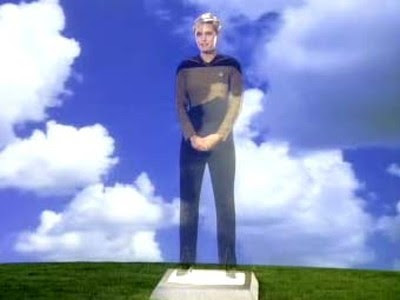