Too Short A Season

Episode: s1, ep 16
A good episode with both an interesting SF concept and an emotional core that works, no wonder there isn't a B-plot. The regular character are pushed into the background by Admiral Jameson, even though many of them haven't been given any decent plots yet.

What Happens
A Federation ambassador and embassy staff have been kidnapped by terrorists. Karnas, the leader of the planet, says that the terrorists will only speak to Admiral Jameson, who was a hot-shot negotiator there 45 years before. The Enterprise collects the Admiral, who is old (but not too old to pull rank) and in a chair because he suffers from a degenerative disease.
Dr. Crusher is suspicious about the outdated medical records she’s been given, and
Suspicion grows when Jamieson walks across the bridge. There’s no cure for his illness and this kind of recovery should be impossible. It turns out the Admiral secretly visited reclusive aliens who have rejuvenation techniques. The process was very painful and he was meant to take the drugs over 2 years, but when he heard about the assignment he took two doses at once. He had secured an extra dose for his wife too, but he didn’t tell her about it, so she’s unsurprisingly angry at his selfish presumption. 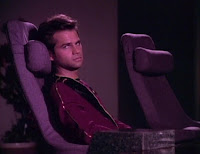 Over the episode Jameson gets fitter and younger. He talks with Karnas over a secure channel, it’s clear that they have a history. There are no terrorists, Karnas has brought Jameson there to exact his revenge. Eventually Jameson tells Picard that his big negotiation 45 years ago was actually a deal to give weapons to Karnas. In order to balance things out Jameson he also gave weapons to Karnas’s rivals, a 40 year civil war ensued.
Jameson impetuously decides to lead an away mission to rescue the hostages, just as he did before. He’s relying on old information and the incursion leads to a fire fight and a swift retreat. Karnas is angry and demands to see Jameson, who’s de-aging is now very painful. Jameson is beamed down with his wife and Picard. At first Karnas doubts it’s him, and once he’s convinced he doesn’t want to kill him anymore as its clear living is agony. A few minutes later Jamieson is dead anyway.


Management Technique
As soon as Jameson arrives on the Enterprise he makes it clear to Picard that Star Fleet his put him in charge of the negotiation and rescue mission.
Later (when he’s younger) Jameson leads some of the crew on an away mission, but Picard uses his position as Captain to go with them. Overconfidence, impetuousness and 45 year-old information are the failing of the severely botched mission. Data attempts to correct Jameso, without success. If it weren’t for some barrels and crates that someone had conveniently left in the tunnels under the city, the whole away team might have been killed or injured. As it was Jameson’s medical issues meant that they had to beam back. 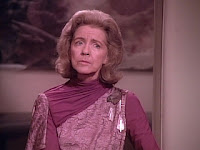 Troi and Crusher talk to Anne Jameson about the situation. She is angry and upset about what her husband has done. It doesn’t quite pass the Bechdel test since they’re talking about the Admiral. Still, I think this is the first time female crew have been shown having a casual conversation (even if it is partly work-related). Crusher points out that Jamieson isn’t truly young again and his condition is very unstable.

No Magic Here
Aliens have techniques that can de-age people, really? Oh, I’m sure that’s all science, even though Crusher can’t figure it out and the process is veiled in mystery and secrets. Jameson’s changes are rapid and unstable because he took 2 doses at once, but the fact is he starts out an ill-looking 85 and goes down to a healthy-looking mid-20s. Tis not natural.

In Space No One Cares What You Feel
Jameson not only fails to consult Anne about getting the rejuvenation treatment he actively hides it from her, even though she's been caring for him in his illness. He obtains a second dose meant for her, without her permission, then he uses it for himself anyway. No wonder she's angry and hurt and let down, he's deceived her and chased after youth leaving her behind. He's not Admiral of their marriage; though I get the impression that he was away with Star Fleet a lot during their younger days. It's not a career path that promotes good family life.
Having said this it's clear he's devoted to her, and his last words to her are fairly touching. 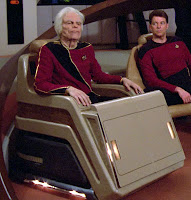 People are fairly rude about Jameson’s age. He’s only 85 (which shouldn’t be that old in the future, I mean just look at how life spans have increased in rich countries in the last century and none of them are close to the utopia the Federation is meant to be), though his illness has left him weakened and unable to walk.
Karnas tells him time hasn’t been kind – though since he secretly hates him that’s not a surprise. Later Riker points out that Jameson could’ve been dead by now, which is not a tactful thing to say to an Admiral.
Jameson does look rather ravaged when he first appears, but that’s because he’s clearly a young man wearing old-man makeup. It’s obvious that a younger version of Jameson will appear later on (though I initially assumed there would be flashbacks). At one point the work of the makeup artists is displayed in a series of images showing how Jameson de-ages.

Staff Meetings: 5
1. Admiral Jameson is questioned by the bridge crew about the planet and the hostage situation.
2. Crusher reveals her suspicions to Picard regarding Jameson’s health, the medical files are out of date.
3. Crusher tells Picard that it’s impossible for Jameson to walk as there’s no cure for his illness.
4. Crusher briefs Picard about Jameson’s blood results, there are strange substances in there.
5. Jameson tells Picard what really happened 45 years ago.

Death by Space Misadventure
Jameson dies, though it is by his own pride and folly, though he is in part trying to atone for past misdeeds. He is buried on the planet where he contributed to decades of civil war, for reasons that are far from clear.

The End
Karnas's plans for revenge are abandoned when he sees what Jameson has done to himself. Jameson dies in his wife's arms and has some touching last words for her. Karnas agrees to release the hostages and be cooperative, he's all out of opportunities for revenge and extortion.
The episode ends with Picard musing on the futility of the quest for youth and the rewards of age and wisdom. It seems that we are meant to learn another lesson. 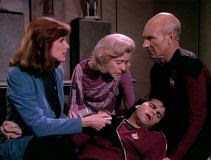