Welcome to the 25th Anniversary week of Star Trek: The Next Generation.
I will be blogging an episode every single day this week, finishing with the series 1 finale.*

Episode: s1, ep 20
We learn more about Geordi, Worf and Klingons, character development is good and there's a bit of action. The episode also shows that the Enterprise was not designed with security in mind. 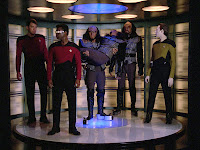 The Enterprise is sent to a disturbance in the Neutral Zone and finds evidence of weapons fire that looks Romulan, have the Romulans returned to the sector? A damaged Talarian cargo freighter is found. Riker, Data and Geordi are sent over to investigate, giving Geordi a chance to test a gadget that transmits images from his visor. Picard watches the away team’s progress on the unstable ship through Geordi’s ‘eyes’, and seems more interested in Geordi’s view of the world than the close-to-exploding ship. The only survivors are 3 Klingons, one badly injured, the whole group is barely beamed away in time (in fact it looks like they’ve been blown up at first, which prompted me to think temporal shenanigans were going on).
The injured Klingon can’t be saved so Worf and the other 2 mark his pasing in the traditional way, which hasn’t been seen by outsiders before. The remaining Klingons say that Ferengi’s attacked them and they went into the Neutral Zone by accident. Picard sense the Klingons are hiding something (even though Troi isn’t there to tell him this) and leaves Worf to deal with them. The Klingons mock Worf for living among humans and talk about how Klingons are hunters who lust for battle.
A Klingon ship approaches, hunting the 3 fugitives who destroyed  last Klingon ship sent after them. Picard says he’ll hand the 2 remaining criminals over and sends Tasha with a security team to detain them. There’s a standoff in a corridor, with Worf in the middle, and Tasha makes assumptions about the Klingons which anger Worf. The fugitives are taken in calmly, and Worf speaks to the Klingon Captain, asking that they be exiled rather than executed dishonourably. The Klingon prisoners assemble a hidden weapon so one can escape from the brig. He goes to Engineering and threatens to destroy the engine unless Worf talks to him. He tells Worf all about his glorious plan to fly around the galaxy with the battle bridge in some kind of reign of terror. Worf listens long enough to get close and kill him.

Klingon Warrior
It’s the first Worf-heavy episode and one that takes a look at the nature of Klingons. We learn that Worf was found by a Starfleet officer after a Romulan massacre and raised by humans on a farming colony. He was young so he’s spent little time among Klingons, which suggests that some of his isolation from the crew (not getting ‘their’ jokes) is intentional. 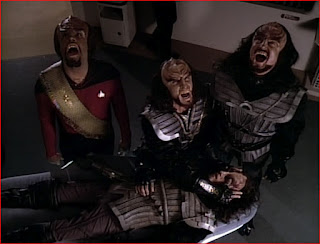 Though he’s not spent much of his life in Klingon society Worf clearly knows plenty about his own people, including their death ritual, which involves staring into the dying Klingon’s eyes then roaring to warn the afterlife he is coming. I’m not sure why this is meant to be the first time outsiders have seen this, I guess the Enterprise just has to be extra special. Klingons may keep to themselves as a society, but it seems unlikely this is the only time a Klingon has died amongst non-Klingons. As this episode shows, they’re an aggressive people and fond of battle, they must die in front of other races all the time.
The 2 Klingons mock Worf for restraining himself so much he can live on a vessel with ‘prey’. They make Klingons sound a bit like werewolves, but with a less obvious or predictable trigger. It’s clear that Klingons are meant to be a predatory as a species. The crew in the corridors certainly seem alarmed to see 3 Klingons walking around. The rogue Klingons say that peace is anathema to them and they should fly around the galaxy killing stuff, though they are shown to be extremists who use deception and killed their own people. The Klingon Captain who comes to capture them reveals that their brand of bloodthirsty extremism is very tempting to Klingons, which is probably why they have to be executed.
I think Worf is only persuaded by them because he likes being in the company of his own kind, and their descriptions of fierce hunters are appealing to the Klingon mindset, though it’s unfortunate that he tells them about the battle bridge. When security show up there’s a moment when Worf’s loyalty is uncertain, then a small girl steps out of a lift and Tasha assumes the rogue Klingons are going to hold her hostage. Worf is angered by this assumption, which is fairly offensive. “Cowards take hostages. Klingons do not.” It shows Tasha knows little about her crewmate’s culture, or about him.

Geordi's fancy visor transmitter really impresses Picard with its 'visual frenzy'. Picard is so impressed he rather forgets he has crew wandering around a disintegrating spaceship. Instead he asks Geordi loads of questions about his sight, and tries to direct his movements like it's a particularly psychedelic episode of Knightmare.
We can actually see how different Geordi's vision is to what everyone else sees. It now makes sense that he can detect things that even Data can't see. It's interesting that Geordi sees Data as having an aura and assumes that's a normal visible feature of androids.

Management Technique
When Picard discovers that the visiting Klingons are fugitives he decides not to tell Worf but sends Tasha and a security team to detain them. Despite Worf being a member of the bridge crew it seems he isn’t fully trusted. This instinct is proven to be unfounded when Worf saves the ship and says he isn’t interested in leaving the Enterprise.

Continuity
At the beginning it’s said that the Romulans haven’t been in the sector for a long time. If this is the case why was there talk of Romulans massing in Angel One? That was the whole reason the Enterprise had to leave quickly in that episode, feels like an excuse now.


Security Breach
No matter what the circumstances of your arrival on the Enterprise it seems you automatically get free reign of the ship and will be escorted by the crewmember who is most likely to sympathise with you (see Datalore). Though I suppose there is some sense in assuming that Worf is the best at dealing with fellow Klingons (though Data is presumably stronger than a Klingon). 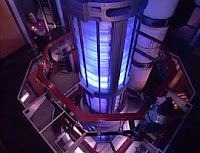 The lack of security control onboard is dreadful. There’s little to stop anyone roaming the ship. Security has no powers to restrict movement (see Won’t Somebody Think Of The Children).** Prisoners aren’t checked for concealed weapons before being put in the brig (which doesn’t seem that hard to break out of). There are no special security measures preventing non-Starfleet personnel from getting into Engineering, and apparently no one in Engineering has weapons to hand. Once in Enginering an invader can simply walk up to the Engine, which can be destroyed (thus destroying the entire ship) with a single handheld weapon. If it’s that vulnerable put it behind a door or something. Next we’ll find out that there’s an exterior vent that would cause the ship to explode if someone shot into it.

Future Prejudice
On exploring the disturbance in the Neutral Zone Riker’s assumption is that it could be the Ferengi, even though Picard points out it’s outside their territory. 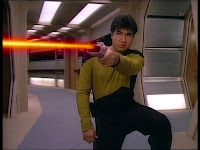 Death by Space Misadventure
A nameless yellowshirt is killed in a corridor by an escaping Klingon. At least I assume he’s killed, they don’t seem like the kind of guys who set their phasers to stun.


Won’t Somebody Think of the Children?
Riker suggests that the ship is split before entering the Neutral Zone. This would mean that the children and non-combatants are protected in case the disturbance turns into trouble. Sensible, right? Picard decides not to do this until they have a little more information, because the kids will be so useful in the information gathering process? 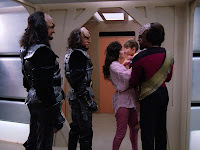 A small girl exits a turbolift and runs into the middle of a standoff between rogue Klingons and a security team. If security are running an operation on the ship shouldn’t access to that area be restricted? I mean you can’t necessarily stop people walking down a corridor, but surely you can put a stop on a turbolift? I'm also a little confused that an uncertain child decided to run towards an angry, armed stranger, but kids are weird.
The End
Picard contacts the Klingon Captain to report the Klingon deaths. The Captain asks Worf about it and offers him a place serving with the Klingons, Worf thanks him. When the transmission finishes and everyone on the bridge eyeballs Worf, he points out that he was just being polite and has no intention of leaving the Enterprise. Picard is glad and says the bridge wouldn’t be the same without him... so presumably the mistrust and cultural misunderstanding isn’t going to change things. Good to know, I guess. 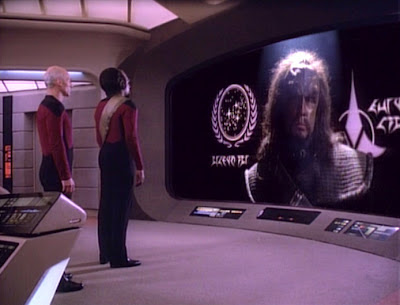 * For the sake of honesty, I'm actually going to be at FantasyCon (and possibly offline more) at the end of this week. The episodes have been blogged in advance, thanks to the magic of technology.

** It’s probably because I’m used to Deep Space 9, but I keep wondering where the bulkhead doors and security force fields are? I guess the Cardassians are more security conscious, which makes sense as they had to deal with rebels/terrorists/freedom-fighters a lot.