Episode: s1, ep 22
Last episode it was arms dealers, now drug dealers are the villains of the piece. Although the situation and resulting moral dilemma is far more nuanced than most previous episodes and is not simply resolved.

The Enterprise is studying a star with an intense magnetic field, which may cause system problems. The bridge watches the changes in the sun with awe. There’s a distress call, a freighter is going to burn up in the atmosphere. It’s an old ship with 6 lifeforms onboard and only minutes left. The people on the endangered ship don’t know what they’re doing, causing much annoyance and confusion to the Bridge crew as they try to help. Eventually Tasha has to talk them through beaming off the doomed freighter, and instead of the crew they send over cargo. At the last minute only 4 beam away and they are more concerned about the safety of the cargo than the two who died.
The rescued people are from 2 neighbouring planets and are in heated dispute over the ownership of the cargo. They have zappy, electric hands, which mean they’re permanently armed. Picard feels he has to resolve the issue. The aliens are impressed by Starfleet’s technical knowledge and ask if they can have parts for their own ships. The cargo is medicine that is desperately needed by the Buyer’s plague-ridden planet. The Sellers maintain that their people work very hard to create the medicine and cannot just give it away. 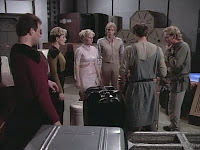 Crusher realises that it’s not medicine but a narcotic; the plague doesn’t exist, the symptoms are withdrawal. The entire Buyer planet has been addicted for 200 years. Crusher wants to help with a synthetic drug that will wean them off the addiction. Picard says they can’t do anything, the planets are symbiotic and the change would destabilise both. The Sellers offer this one batch for free and Picard realises that they know precisely what they’re selling. It’s not symbiosis, it’s exploitation. Picard still can’t get involved, which means that the Enterprise won’t help fix the failing freighters. The Addicts will have to figure it out. The Prime Directive means they can’t change the status quo, but it also means they don’t have to help maintain it. The Addicts are aghast and point out that Picard is dooming their entire planet by cutting off their supply of medicine, Picard says he knows exactly what he’s doing and casts a grim look at the crestfallen Dealers. Beverly points out the whole planet will suffer painful withdrawal and Picard speeches about Prime Directive, though it’s clear the decision weighs on him.

Riker: lover, adventurer, middle-management
While watching the sun Riker uses the word awesome in its original meaning, giving it an impact it has mostly lost.
In order to get hold of the cure the desperate Buyers/Addicts try to hold Riker hostage with their zappy hands. Picard won’t be coerced and since they aren’t bad people they let Riker go and are very sorry about it. His expression is hilarious. 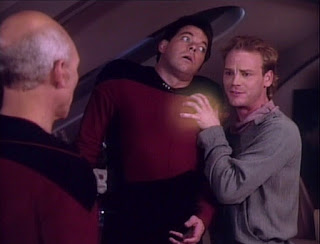 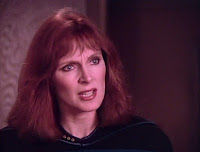 At the mention of plague all the aliens are sent to sickbay, since the badly functioning transporter may not have successfully run its usual med scan. Crusher examines the aliens (and the crew who have been in contact with them) and cannot find any sign of an illness, even in the suffering the Buyers. When the cure relieves their suffering immediately Crusher realises what’s going on.
As a Doctor she’s disgusted by the situation, urges Picard to end the exploitation, and is understandably frustrated that he can’t. She even offers to synthesise a non-addictive alternative to wean the Addicts off their dependency, a very sensible and humane option that nevertheless is not allowed.

Dark Past
Wesley incredulously asks Data about why people let themselves become addicts, because Data will know about that? It's Tasha who provides a nuanced and realistic answer. Her colony (the one with the raping and violence and poverty) was full of addiction, as people sought any way to feel good for a while. She points out that no one means to get addicted, but by the time the drugs feel artificial you have to take them, not to feel good but to keep from feeling bad. Wesley -a child of privilege- doesn't understand.
I thought this was good scene, especially as I'd been expecting a heavy-handed 'drugs are bad' speech.

Space Trumpets
I like that when Picard makes a ship-wide announcement it is preceded by a naval whistle. I like to imagine an Ensign somewhere blowing a whistle into the comms system. In discussion with friends we decided that a holiday camp/supermarket-style announcement with a xylophone intro would also be a nice touch. Hidey-Hi!

The Prime Directive is a Harsh Mistress
Despite the shameful exploitation of one species by another the Prime Directive means that Picard must ignore his moral outrage and refuse to offer aid, since it will certainly change the way of life of both species. However it’s clear the situation wasn’t sustainable anyway, and since Picard isn’t allowed to interfere he withdraws the offer of technical help (which presumably he shouldn’t really have given in the first place). It means that events will take the course they were going to anyway, the exploitation will eventually end, but there will be much suffering because of it.
This is the sort of clever but morally uncomfortable solution that Justice simply didn’t have.


Something Is Very Wrong

How come the Buyers/Addicts don’t seem to understand their own tech? They don’t know how their freighters work, which is kind of stupid. Their civilisation’s wellness depends on ferrying medicine, resources and tech between worlds, so surely those freighters are their number one priority. I suppose the implication is that the addiction stops them from functioning well, but that seems a bit lame, since there’s little indication that the drug impairs any abilities. I appreciate this is meant to be like the story of the grasshoppers and the ants, but with narcotics; however it doesn’t work if the ants have forgotten how to gather food.


Future Fashion
The costume design very neatly sums up the situation. The Sellers/Dealers look more affluent than the Buyers/Addicts, clearly indicating that they receive all the luxuries that their neighbours make. Also the Dealers have an appropriately 70s look. 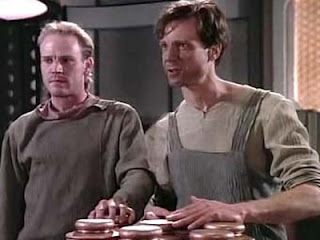 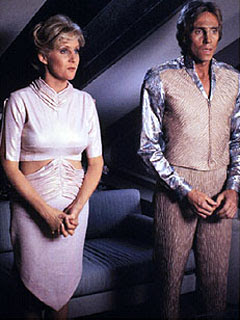 Death by Space Misadventure
The other 2 unnamed people on the doomed freighter die, their own people don’t care.

Won’t Somebody Think of the Children?
At the start Picard warns the entire ship that studying the star will cause disruption to systems, despite the shields. Engineering is prepared, but even so there’s probably no way of knowing what will go wrong. As the Bridge crew watch the shiny dance of magnetic fields Picard sends the ship closer, even though it will ‘push the shields to their limits’. Gosh I hope that lightshow is worth almost overwhelming the systems that keep everyone onboard safe, and that life support continues to function as it should.

The End
Picard is sickened by the whole sorry situation and is no longer interested in looking at the sun (lets hope none of the science officers were relying on this trip for their work). He tells Geordi to decide where they go next, he just wants to get away. The episode ends on a bit of a low note. 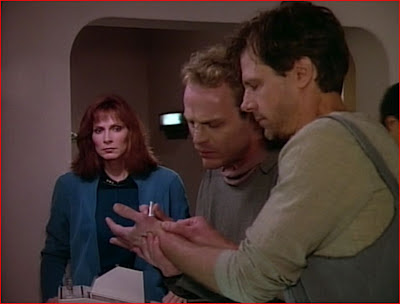