Once Upon A Time - series 1

I finished watching series 1 of Once Upon A Time last week. I'm sure you are surprised to know that I have a few thoughts.

I haven't written spoilers, but I will mention some connections between characters. It's upto you how pure you wish to remain.

I wasn’t sure about the show until the 3rd episode (I think), when Rumplestiltskin tricks Cinderella into paying for something she could have got for free, and the whole idea of a Cinderella story is subverted by the character herself. This was brilliant to me and I decided to stick with it.

The Good
The way the fairytale characters know each other and their different stories are woven together is very clever.
The 2 overarching flashback narratives are Snow White, her Prince and the Evil Queen; and the tale of Rumplestiltskin. Each of these narratives draw in other traditional stories; Red Riding Hood, Cinderella, King Midas, Pinocchio, a genie and Wonderland are all connected to Snow, Prince Charming and Regina (the evil queen). Whereas Rumplestiltskin's background includes links to many characters, and a very interesting retelling of Beauty and the Beast.

Regina has the best outfits. Her initial evil queen look is a bit obvious, but as the series progresses it's clear she has a very interesting sense of style.

The modern-world versions of the characters work very well in most cases. Mr Gold and Regina are particularly wonderful, their villainy is both fun and complex. The main characters mostly work well as real people with normal lives and there are several that have good emotional depth that doesn't rely on the gimmick of the show. Even most of the background characters with single episodes inject life into their stock characters, Grumpy, Sydney and Graham are good examples.


The Bad
Emma is the worst sheriff ever!
She has no police skills and is absolutely terrible at investigation. I suspect the only reason she has such good escaping skills is because she's constantly doing stupid stuff to get herself in trouble.
Given the premise of the show you'd think Emma would be the most normal, reasonable person, she is not.
Most of what she does makes no logical sense, and in a real world setting (which is all she knows) much of it is lunacy. The fairyland flashbacks show a place/time where melodramatic storytelling is fine and perhaps, as Emma doesn't has any of those I'm judging her harshly, but at times I swear she acts more like a character than the other characters (most of whom are actually 2 characters).*

The dynamic between Henry and Regina doesn't make sense.
At first I assumed that Henry's distrust of his adopted mother was correct, that he was simply part of her scheme, which was weird but had a logic to it. As the series goes on it's clear that's not the case (which leaves me with questions that will hopefully be addressed next series), but this only makes the situation feel even more unnatural.
Henry believes wholeheartedly that his adopted mother, the woman who loved and raised him his entire life, is evil. Despite this he lives at home, eats his meals, goes to school and seems like a happy, healthy, well-adjusted, good-natured child (apart from the weird magic obsession). I don't think that actually works.
I appreciate that this set up is necessary for the plot, but on an emotional level it feels too unlikely.


I wasn't sure about the ending. I don't want to give anything away, but at one point it all seemed a bit easy. Then another element was introduced which made me interested to see what they do next. 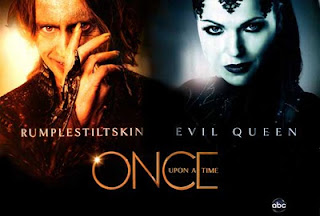 * I apologise if this point is confusing, I've found it hard to articulate.
Posted by Catherine Hill at 21:24