This is a surprisingly action-packed episode in which there are no staff meetings and we see lots of shooting and some fancy flying.

The Enterprise is sent to the Lorenz cluster to investigate the disappearance of the USS Drake, which was investigating the disappearance of intelligent life from planet Minos. The ship is hailed by an automated salesman, the planet was known for making and selling weapons. Their slogan was “Peace through superior firepower.” Tasha wants a small team sent down to assess the danger (as opposed to the dozens that normally go on these jaunts), so she, Riker and Data beam down to a misty jungle. Riker sees his old friend Captain Rice of the Drake, who intensely asks various, odd questions, and turns out to be an information-gathering hologram. A flying drone shoots Riker with a stasis field so he can’t beam away. Picard takes Dr Crusher to the planet, despite Troi’s protest. Geordi is left in command.
Riker is alive, but it will take Data a while to release him. Another flying drone shoots at the away team and Picard and Crusher flee before falling down a hole. Crusher is injured and must guide Picard through first aid. Tasha and Data destroy the drone then Data frees Riker. Before the away team can be beamed up the Enterprise is attacked in orbit. The attacker cloaks whenever they try to lock on, and Geordi’s decisions and rank are questioned by Chief Engineer Logan. After he is unable to locate the attacker, Geordi takes the ship out of orbit, gives the saucer section to Logan and returns to rescue the away team.
A third flying drone means Data has to literally throw Tasha out of the way. This one is even harder to kill, they’re upgrading. Meanwhile down the hole, Picard can’t find an exit, but he discovers they’re in a control chamber. The holographic salesman appears trying to sell the ultimate weapon system. It can take out ground personnel and ships; it learns, upgrades, and is invincible once activated. Here is what destroyed the populace. The orginal away team find the hole, Picard and Data are stumped by the machine until Beverley points out they should turn it off. Picard has to pretend to buy it so the saleshologram shuts down the drones. Meanwhile Geordi takes the ship into atmosphere, where the turbulence means they can locate and destroy the cloaked attacker. 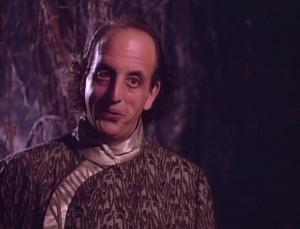 Vincent Schiavelli, plays the holographic salesman. He’s got one of those faces you recognise from various things, and is a great character actor. 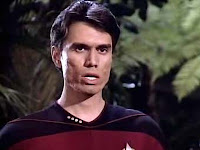 Riker goes on about Captain Rice of the Drake, who he knew (and presumably had a crush on) at the Academy. Rice is described as a risk-taker and arrogant, but also normally right. Riker explains that in one Academy test Rice rejected the 3 accepted answers and submitted his own, now there are 4 accepted answers.* Troi chimes in with a perspective on how such a man might react to stress or threats. It’s odd that they build Rice up so much since he’s already dead and all we see of him is a decoy. Although there’s an expectation that Rice will be in the episode, it’s clear from the circumstances (especially all the talk about lifesigns) that it isn’t really him. I don’t think the revelation about Rice has as much pathos as the writers were intending. That said it is funny when Riker tests the hologram by saying he’s serving on the newly-commissioned Lollipop, which is a good ship.
Riker gets frozen by a stasis field and is motionless for quite a while. At least he wasn’t pulling a stupid face when it happened.

Does Not Compute
Data is able to safely jump down over 11 metres, everyone seems surprised by this. I know Data doesn’t exactly have an instruction manual, but surely at some time while he was in Star Fleet someone tested his capabilities? I’m not sure why Riker fusses about this so much, Data should be able to judge his own abilities and while he might not be indestructible he can be reassembled.

Counsellor Pointless
In this episode Troi shows an advantage of having a Counsellor (rather than an ineffective empath) on the Bridge. Geordi is facing a lot of stress, he’s outside his comfort zone and being contradicted by a higher-ranking officer. Troi has a quiet word, not only to keep him calm, but to emphasise the importance of showing confidence in the inexperienced crew members. I wonder if she has had this chat with Picard? It seems like he could use it sometimes. 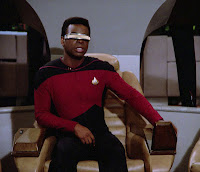 Geordi is put in charge of the bridge in the absence of Picard, Riker and Data,** even though there are higher-ranking crew onboard. I don’t understand how seniority works, since I know Troi (who doesn’t know how to fly or fix a spaceship) can be left in charge in an emergency. Chief Engineer Logan questions Geordi and makes a power-play by demanding Geordi relinquishes command. Geordi sticks to his guns and even comes up with a solution that appeases the contrary Chief.
Geordi’s plan is a bold and clever one. Once it’s clear they can’t accurately track or anticipate the attacker Geori forces it to show itself by descending into atmosphere. With Troi’s advice he’s able to guide inexperienced crew through a difficult situation. The attacker is destroyed, the away team is rescued and no children were put in extra danger to do it. I have to say I found Geordi a bit boring before, but I have renewed respect for him now. He absolutely deserves the enthusiastic “Engage” at the end of the episode. 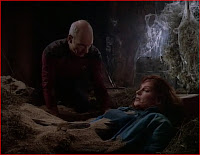 Despite being injured Beverley manages to guide Picard through caring for her. As well as standard considerations like how to treat shock (which he ignores), she also shows her skills as a herb woman. She gets Picard to test and taste some roots and from what he tells her realises that they’ll work as an anticoagulant/painkiller.She knows this because her grandmother was a doctor on a colony with few supplies so she had to experiment with natural remedies, and taught Beverley her knowledge. It’s lucky that the same rules apply on this entirely alien planet and that root was useful and not very poisonous.
Beverley often seems to be the voice of common sense. I love that she had to point out that they should turn the weapons system off, in order to disable it. I get the impressions there aren’t many off-switches in the future

Management Technique
Picard helps Beverley with her injuries at first, carefully following her instructions, but then he seems to get a bit bored with the whole first aid thing. So he orders her to stay conscious (even though she’s in shock and he knows she needs to be kept warm and awake) and wanders off to look for a way out.
That Beverley is still alive, and conscious, when he comes back is a testament to her willpower.
Random Crewmembers 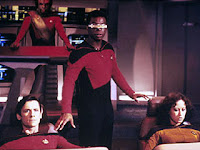 I don’t know what happened to Chief Engineer Argyle, but I don’t like his replacement. Logan (who, despite his name, doesn’t seem to be Scottish) initially tries to get Geordi to leave orbit. Logan’s demand that he take command seems a bit presumptuous, but he could honestly want what’s best for the ship. However when Geordi does break orbit Logan argues with him again, making it clear that he’s just power hungry. Despite his contrary and argumentative nature, Geordi gives Logan the saucer section and charges him with taking it to safety.

Ensign T’Su and Lieutenant Solis are young crew who are guided through the attacks, rescue mission and flying in atmosphere. They acquit themselves well, though don’t get much thanks at the end. 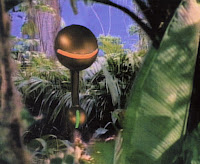 The planet of Minos (which is not pronounced the same way as the ‘father’ of the Minotaur) makes weapons and sells them to whoever will buy. I wonder why they’re not in the Federation?
They learn the error of their ways when they are all killed by their own weapons, or presumably they would’ve if they weren’t all dead. I think there’s a message here (shocking, I know) about the dangers of commerce taking over a society.*** And probably something about war being bad too.

Death by Space Misadventure
All the intelligent life on Minos dies. The entire crew of the Drake was presumably destroyed soon after they arrived at Minos.

Won’t Somebody Think of the Children?
The Enterprise is being attacked. The ship is in danger, as well as the away team. Geordi retreats to a safe distance, splits the ship, and sends the children out of harms way. This is exactly the thing that Picard didn’t want to do last episode. Does the cost of every saucer separation get docked from the Captain's pay?


The End
Riker and Picard are mock angry at Geordi for separating the ship, but their approval shines through. Geordi stays in the big chair on the Battle Bridge and says “Engage”. It’s clear he loves it, which is nice. 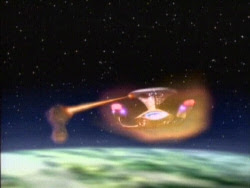 * Is this guy supposed to be like Kirk? I think this guy is supposed to be like Kirk.
** Should so many of the senior staff be going on away missions? Geordi handles himself well, but it’s clear he’s not used to this situation and his status is open to questions.
*** Actually I can get behind this message, and it’s not as heavy-handed as it could’ve been.