Episode: s1, ep 13
It turns out androids can have evil twins too. We discover more about Data's origins and he meets a troublesome family member in an entertaining, if rather predictable, episode.
The crystal entity that appears actually has a sensible descriptor instead of a weird alien name, so it makes sense for me to stick with that rather than calling it the giant crystal space tree. 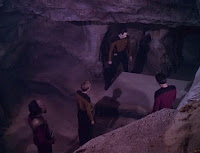 The Enterprise is in the Omicron* Theta star system and returns to Data's home planet, which is now completely lifeless. Data was found 26 years earlier with the memories of the dead colonists hurriedly stored inside him. An away team returns to the place of Data’s ‘birth’ and discovers a shiny science facility hidden inside some rocks. This is where Data was created by Dr Noonien Soong, the Federation’s foremost robotics expert, who disappeared in disgrace years ago when he failed to prove his theories. Looks like he had the last laugh, except that he’s presumably been dead for years. In a storage area the team find an android in pieces. It's taken back to Enterprise where Chief Engineer Argyll leads a team to assemble it. Data confidentially shows Dr Crusher his off-switch, so that his circuitry may be examined by the assembly team.
The awakened android is called Lore, he is Data’s brother. Lore was made first, but he was too human-like, so Data was made with flaws. Lore is able to lie, make jokes and use contractions, despite this Data seems to trust him. Lore says that a life-eating crystal entity attacked the planet and destroyed all the organic lifeforms. There are questions among the crew as to how much Lore, and Data, can be trusted.
Lore drugs Data, switches him off and swaps places with him. Lore is friends with the crystal entity and leads it to the Enterprise; whilst pretending to be Data, he suggests a plan to scare it off that will actually leave the ship vulnerable. Wesley realises something is up, but makes a pig's ear out of reporting it and loses all credibility. He convinces his mother to revive the real Data. Data confronts Lore and they fight before Data and Wesley manage to transport Lore away.

Does Not Compute
There’s a lot I didn’t know about Data. I’d assumed he was created by Star Fleet Science on a main Federation world, though I knew his creator died and assumed that was the reason androids aren’t common and few people understand how they work. I hadn’t realised that Data had joined Star Fleet voluntarily and gone through the Academy like an ordinary recruit, I’d assumed he was built to do that. I also had no idea he had the memories of 411 people, in that case you’d think humanity wouldn’t be such a mystery to him and his social skills would be better. 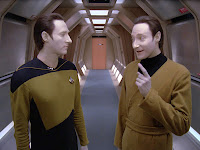 It turns out Data and Lore are the result of fringe science and were built by a spurned genius. Lore was the first to be built, but he was too human. He has all these bad personality traits like deception, ambition, arrogance and creepiness. Lore was unassembled and Data was made to be odd and robotic, because that made everyone feel better. It’s perhaps not surprising that Lore is an angry robot and hates organic people, he’s been the victim of hypocrisy and (like Father Cavil in BSG) feels he’s not been allowed to access his full potential.**
What is the big deal with contractions? Why are they an indicator of humanity? Why is Lore more advanced because he is able to use them? They are just a linguistic tool, with usage that varies between languages. In French they are mandatory; does this mean Data cannot speak correct French? I would guess that this whole thing was simply a way of making Data sound more robot-like, then it got turned into a plot-point for this episode.
Wait, so Data can be drugged? I know he was built with intentional flaws, but that seems like a silly one to include.

The Boy
Early on there is some fairly sickening praise for Wesley from both Data and Lore, at least Lore is being sarcastic. When Geordi shows Lore the helm Wesley primly explains that “You will find that there are many rules on starships that must be learnt.” He is almost exactly like one of those girls you hope will be taken down a peg or two in an Enid Blyton boarding school book.
Riker asks Wesley to discreetly look in on Data after he makes an odd transmission; because checking on suspicious crew members is exactly the job for a socially-awkward 15 year old who has the lowest possible rank. Wesley discovers a deactivated android on the floor and another, who claims to be Data, explaining that he was attacked. Then Wesley says something monumentally stupid (see Awkward Moment).

Later Wesley has good reason to suspect ‘Data’, but instead of following the rules he was going on about earlier and making a calm report, he contradicts the Captain, shouts, and basically throws a tantrum. Would it have been so hard to take Picard aside, or get his mum to help explain things? Instead he claims he’s being oppressed because of his age, and gets himself and Beverly thrown off the bridge (if I were Beverly I’d be soo embarrassed). Having said that Wesley was asked to keep an eye on Data earlier on, so it seems strange he's totally ignored now. Or it would be strange on a ship that had coherent security procedures. On the Enterprise that's just how it goes.
He convinces Beverly to revive the real Data and together they go and confront Lore. Wesley probably shouldn’t be there since Lore mockingly threatens to kill him and actually shoots at Beverly. At the last Wesley helps to save the day (at least someone else gets to share his limelight) by activating the transporter when Data tells him to.

Awkward Moment
Wesley is sent to discreetly check on Data, so he wanders right in and asks questions. Lore (disguised as Data) explains that his brother attacked him and had to be deactivated. Lore's facial twitch gives him away, but ‘Data’ says he was imitating his brother. Now if there’s one thing we are meant to know it’s that Wesley is very smart.

WESLEY: … If you'd said we've been using the sensors, instead of we have, I might have suspected you were Lore.
LORE: Yes. I do use language more formally than Lore.

If Wesley doesn’t suspect anything then he is an idiot and this was a very pointless and inane thing to say. If he does suspect something this was a monumentally stupid and dangerous thing to say, as he has immediately alerted the deceptive android to his suspicions.
I suspect this bit is just set up for later when Wesley hears Lore mutter ‘isn’t’ and knows his true identity. Still, it’s really clumsily done.

Space Trumpets
The music suggests poignancy as Data looks out at the planet he came from, though Data himself isn’t particularly fussed one way or the other.
Ominous synth music accompanies Lore’s first line and reappears regularly to punctuate his words and actions. If Lore appears to be doing something innocuous the Ominous Synth will play so that we are in no doubt that Lore is both creepy and evil. 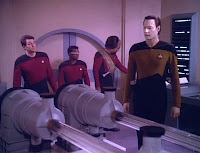 When you find a gas-filled storage container in a hidden underground lab why would you just open it without trying to figure out what the gas was and what was being stored?
It must be difficult to be a senior security officer on the Enterprise. You’re just trying to do your job, but everyone gives you funny looks for being suspicious and trigger-happy, and they refuse to take your suggestions. Tasha questions how much they can trust Data now that Lore is around, and everyone looks at her like she suggested mounting his head on a spike (though if you were going to do that to any crew member Data would be the least horrific choice). Picard actually sticks up for her and points out that it’s a perfectly sensible question from the Chief of Security.
Picard wants to keep an eye on Lore, so presumably he’s suspicious of him. Despite this no one devises any way of testing Lore’s identity or monitoring him from a distance. His movements aren't restricted and he’s even shown the helm and the ship’s computer. Are all visiting relatives allowed to poke about the ship?

Staff Meetings: 3
1. A briefing about the discovery of the other android. Everyone is awkward and euphemistic when talking about assembly and parts, but Picard points out that they have no need to be.
2. Picard and Data discuss Lore, and Data’s loyalty. Picard refers to Lore as ‘it’ which is problematic for Data.
3. The bridge crew discuss the crystal entity and how much they can trust Lore, and Data.

The End
Lore has been hurriedly transported away by Data and Wesley to a location unknown. Tasha, Riker, Picard and an injured Dr Crusher come in. Lore's giant, sparkly pal moves away, because it gets bored or something. Picard gruffly reprimands Data for some minor irritation, so we know that all is back to normal.
Riker and Picard say something about a computer refit and speculate on Data's humanity versus his stability. Another rare episode which doesn't end with an order to 'engage'. 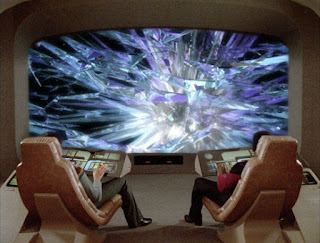 * Omicron or Όμικρον is a great Greek letter, it means short (or small) 'o'. It's name sounds pretty different to the other letters in the Greek alphabet. There are plenty of repetitive sounds: beta, zeta, eta & theta; epsilon & upsilon; xi, phi, chi & psi.
Also when you learn the Greek alphabet in blocks of 4 you get to nu, xi, omicron, pi. I don't know what Omicron Pie is, but it sounds intriguing and delicious.***

** Though Cavill had more right to complain as he was stuck in a crappy human body.

*** I did a short course in Ancient Greek when I was in Sixth Form College, mostly because I thought it'd help me get into university. Except I then forgot to put it on my uni application form
Knowing a little bit of Ancient Greek means I can read Greek letters, so I can slowly sound out Greek words and understand only those that share a root with English. It's a remarkably impractical skill.
Posted by Catherine Hill at 16:36