I have seen this episode before but I must have been fairly young as all I can remember is the lifeform referring to people as 'bags of mostly water' and Data explaining why that's accurate. Nothing else.

Episode: s1, ep 18
Another episode with an SF concept and very little embarrassment, I think they're getting the hang of this now. 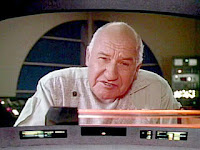 Whilst mapping the Pleiades the Enterprise visits a terraforming outpost. Terraformers are very admirable, if slightly odd, people who work in small, isolated teams to make planets habitable. The grumpy base director tries to stop them from visiting. Troi senses deception, panic and fear, so Picard pushes the issue and sends an away team. They’re met by a friendly terraforming designer who infodumps mightily. She mentions that the Federation decides which planets are suitable, as the process can only be done on planets that have no life. (I think this might be a hint.) Troi hyperventilates and then an engineer screams as he’s mutilated in the drill room. The terraformers are beamed to the Enterprise.
Data thinks the drill was controlled, which is confirmed when it attacks him. Geordi finds something inorganic flashing down a drillhole and it’s taken to the ship’s medical lab. The computer investigates and finds that though it should be impossible, the flashing thing is probably alive. There is a lot of staring at screens. The director knew about the lifeforms, but tried to cover it up for sake of the project, however Troi doesn’t think he’s capable of murder. The life form changes, emits energy, breaks a screen and tries to access the computer. Crusher calls for a quarantine seal, which contains it but doesn't stop it growing. Using the ship’s translator it speaks to Picard. It is angry because the 'bags of mostly water' have been destroying its home and slowly killing it. It took over the drill and killed the terraformer in self-defence. It declares war on the bags, which is very brave for a couple of Christmas lights.
Data technobabbles and concludes that it’s a micro-brain and can communicate with the computer faster than the crew can. When it rests they try to beam it away, but it won’t let them. It has complete control of the med-lab and could destroy the ship. It changes into a large crystal-thing and one of the terraformers figures out that it needs light to live. Riker turns the lights off manually, at which point the crystal begs for its life and agrees to end the war. It is sent home to its wet sand, and says that it doesn’t trust the bags. It claims they are too primitive and invites them to return in 300 years.

Does Not Compute
Data believes the laser drill was controlled by a mind. Later he is pitted against it and emerges victorious, destroying a very fancy bit of kit in the process. Though I imagine that Data himself is the more unique machine and had the laser drill broken him the terraformers might well have been in trouble.
Picard orders Data and Geordi ordered to investigate the base. They don’t pretend to be Holmes and Watson yet, that would probably have been a distraction.
If a lifeform that is basically some fairy lights that turn into an over-sized paperweight can acces the computer faster than anyone on the ship, maybe it's time to get Data a port. He has to tap consoles and use voice commands, surely plugging him into the system would be more efficient.


Counsellor Pointless
Troi’s breathing becomes laboured jut before the terraformer is attacked by the drill. However she doesn’t warn anyone, which means her ability is of little use in danger.


Management Technique
Picard tells Geordi to get Data out of the drill room when it sounds as though Data is being attacked by the malfunctioning laser drill.
What is Geordi supposed to do? He may have similar eyewear but he isn’t Cyclops, and even if he were more lasers wouldn’t be helpful in this situation. It doesn’t occur to Picard to beam Data away until after Geordi has said he can’t get to him, by which point there’s no need. I suppose if you’re going to leave any crew member stuck in a room with a murderous laser drill Data is the most sensible choice. Still, I wonder what would have become of Geordi if he had been able to open that door.

Awkward Moment
The whole scene on the terrafroming base has awkward undercurrents, most of which are intentional. The friendly engineers awkwardly apologise for the grumpy director and explain that they rarely have guests. The terraformer who is killed/injured is intrigued by Data, and the gleam in his eyes suggests he wants to get under his skin, or whatever Data has instead of skin. Gruff, blond engineer isn’t as grumpy as the director, but he isn’t particularly welcoming. Then someone gets mutilated, which will put a dampener on socialising.

Despite this the true awkward moment is a short but weird exchange between Troi and Riker. Troi has been assessing the terraformers pysch profiles to see if they could be capable of murder. When Riker asks what she thinks of the female terraformer, Troi knowingly suggests that he might do better with her.
I find it very odd that Troi is suggesting her ex go and flirt with a possible murder suspect.
It wins mostly because the terraforming base was intended to have an uncomfortable atmosphere, whereas this is just another example of very strange dialogue mixed with confusing suggestiveness, like the director didn't quite get what the writer meant. It’s especially strange because the following scene, where Riker reassures Luisa, works well but isn’t sexual, and then they don’t share a scene again. It all seems rather pointless. 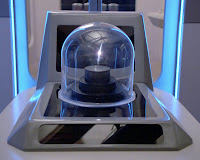 It’s good that there’s a quarantine seal for the medical lab. However even sealed in the lab the shiny lifeform is still able to communicate the computer and threaten the entire ship. Perhaps future starship designers should position the medical lab (or anywhere that unknown life forms and other weird stuff is stored) in such a way that they can be blasted away from the ship and into space, if necessary.

Something Is Very Wrong

The flashy micro-brain is beaten by turning the lights off. It says it doesn’t trust the bags, but agrees to end the war it started, as it as little other choice. When Picard suggests that trust should be built between them the micro-brain says it’s too soon for that and suggests the bags return in 300 years when they're less primitive.This from a life form that lives under sand.
It sounds like a trap to me. In 300 years it might have evolved terrible crushing jaws or killbots.


Staff Meetings: 4
1. Data briefs Picard in the ready room, the terraforming director is annoyed by Data’s suggestion that the drill was controlled.
2. Crusher, Picard, Data, Geordi and Wesley (for some reason) look at the flashy lifeform. There is a lot of staring at screens, though the computer does most of the work here, Crusher just asks it questions.
3. The Director is accused by Picard, and it is revealed that he knew there were lifeforms. After he leaves Troi discusses the terraformers pysch profiles
4. Picard questions the terraforming team in the lounge.

I haven't included the away team's first encounter with the terraformers, though there is a lot of talking and exposition and looking at screens, so it's pretty close to being a staff meeting. However the terraformers, rather than the Enterprise crew, lead the meeting, plus someone is mutilated at the end, so that makes it too interesting to be a true staff meeting.


Death by Space Misadventure
Arther Malencon, terraformer on the Velara Three base, was badly injured by a laser drill that had been taken over by a shiny, inorganic lifeform, he later died of his injuries.

The End
The lights are sent home. The terraforming director realises the cruel irony that in trying to create a place for life he almost destroyed living things. Picard declares an indefinite quarantine on the planet (because apparently he can do that). He concludes with a log entry reflecting on the lesson of the week.
“we are now returning to Starbase with the three surviving terraformers. Perhaps the lesson we have learned from this near tragedy will prevent it from happening elsewhere.”

I hope Arthur Melancon’s family never hear this log entry, I’m sure they view these events as an actual tragedy.