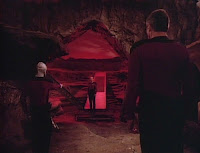 The Enterprise is going to Pacifica* on a science mission, though it sounds like it’ll be fun too. An emergency Captain-only message comes through and Picard takes it in his quarters whilst wearing his dressing gown. It’s from his friend Walker, who says there’s danger he’s unwilling to talk about, even on a secure channel. He requests they meet covertly in person (or as covertly as people can meet when they have to take 1000s of people with them). Picard takes the ship to an abandoned mining planet, there are to be no logs or messages about it. Picard meets with the Captains of the 3 other Federation ships. They believe there’s a threat to the Federation, Starfleet Command has been acting strangely. There are personnel movements and unexplained accidents. Top commanders are different now, and Walker is convinced his First Officer isn’t the same man anymore. He asks Picard to be vigilant and stay in touch discreetly.

Back on the Enterprise Picard talks to Troi and tells Data to monitor all the communications and orders issued by Starfleet in the last six months. There's a disturbance, which turns out to be spaceship debris from Walker’s ship. Now Picard is suspicious he tells Riker about Walker and the concerns previously raised by Admiral Quinn. Riker is sceptical, but Data finds unusual activity, hidden in the communications. Personnel are reshuffled and the new staff are in covert communication with the highest ranks. Data believes key areas of Federation territory are being held. It could be an invasion, but there’s no clue as to who’s doing it. Picard decides to go to Earth and ask questions, because that’s not suicidal.
On Earth some Admirals are confused by the arrival of the Enterprise. Riker and Picard are invited to dine with them and Admiral Quinn says he wants a tour of the ship. Quinn arrives with a giant, purple woodlouse hidden in his briefcase. He doesn’t seem to remember what he said to Picard last time, so Picard tells Riker to keep an eye on him and see if Beverly can examine him. Quinn says something about a new lifeform, Riker questions this and Quinn fights him with great strength. Geordi and Worf arrive and the Admiral attacks, throwing Geordi through a door, then viciously defeating Worf. Beverly shoots him multiple times. In sickbay she says it’s definitely Quinn, but his strength is greatly increased. She finds something odd sticking out of his neck and discovers a purple brainlouse attached to his spine.
At Starfleet Command it’s strangely quiet and Picard goes to dinner with the Admirals and Remmick. Beverly contacts him and tells him about the parasite in Quinn and the neck spike. She advises shooting to kill but Picard points out he didn’t bring a weapon to dinner. Picard is served live maggots, which are eaten with relish by everyone else. He tries to leave but Riker arrives and pushes him back into the dining room. Riker has a spike in his neck and takes his seat at the table, along with the Admirals and one of the Captains Picard met with earlier. Before eating his maggots Riker pulls a phaser and starts shooting. 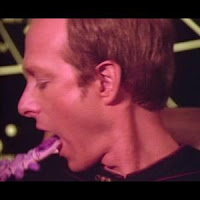 In the fuss Picard grabs a weapon; him and Riker shoot and run. A purple brainlouse leaves the mouth of its host and they follow it down the corridor to Remmick. It crawls up into his mouth, he claims they only want peaceful coexistence and his neck bulges as the critters crawl around inside him. Picard and Riker take their sweet time before shooting but eventually his head explodes. Then a hole appears in his chest and a creature is in living in there. They shoot it until his torso explodes and a load of dead purple brainlice fall out. Quinn’s parasite is gone and he doesn’t die, which is hopefully the fate of all the other hosts. It’s lucky that the brainlice cannot survive without the mother-creature, hunting them all down would’ve taken ages. 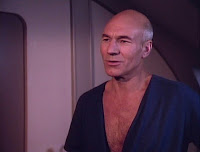 Picard’s not good at politics, as he told Quinn when he refused to get involved in the conspiracy in Coming of Age, a decision that probably saved him. Picard’s instinct is to rashly rush right to Earth without a strategy, a plan Riker mentioned in mockery. He had no idea what he was up against, the only person he knows who did got his entire ship blown up. If they can arrange that in space, think what they should’ve been able to do on Earth.

Riker: lover, adventurer, middle-management
Riker is sceptical about the whole thing at first, but he’s very loyal and probably doesn’t like the idea of problems in Starfleet. It really takes guts for him to go disguised into the enemy lair with a weapon and a pretty sketchy plan.

Does Not Compute
Data is the best choice to analyse the records, he’s got a computer brain and he’s not going to jump to any conclusions. I’m surprised the brainlice didn’t try to take him out, he’s quite a threat. 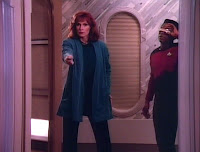 Beverly also knows Walker. Along with Picard he was one of Jack Crusher’s best friends and first introduced her to her husband.
When she repeatedly shoots the Admiral it’s kinda badass. By examining Quinn she learns what the parasites are, how to identify them and how they increase human strength. She’s the one who warns Picard and comes up with an infiltration plan for Riker. Though she does say if the creature dies the host will, which isn’t true later on.


Continuity
Here is the conclusion to events in Coming of Age, it’s a shame all this gets rather painfully squashed into one episode. Thinking of the Changeling crisis in Deep Space 9 I see how interesting it could have been, but Star Trek wasn’t there yet in the 80s. The Next Generation didn’t do intrigue and political stuff. Despite the homing beacon cliffhanger I’m told this was never revisited. I suppose the audience at the time didn’t want that kind of show.

Creature Feature
The brainlice when we see them are gross, but also a pretty colour, and almost cute at times. It think it has something to do with the now-quaint-looking stop-motion way they move. 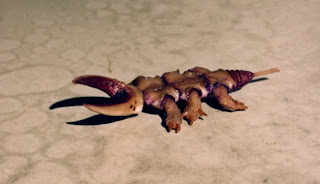 The mother-thing is definitely gross and looks like a chestburster had a baby with a small dragon. The whole exploding head and exploding torso thing is pretty disgusting, and more horror-like than I generally expect from Star Trek. 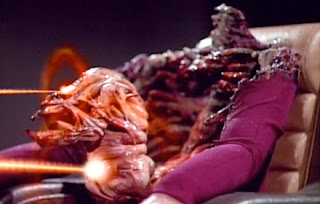 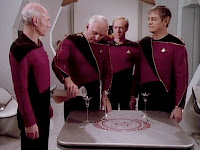 Federation: The Federation suffers from the naïve assumption that anyone in a Starfleet uniform is trustworthy, which is presumably how the brainlice get such a hold on command staff. I imagine a stranger in a Starfleet uniform could go up to most senior officers and ask to show them an exciting new lifeform and that’d be that.
Plus there seems to be very little suspicion among the mid-level officers, meaning that orders are simply followed and not examined or questioned. Lets face it, the spacefaring part of the organisation is not built for secrecy, if Captains want to meet they have to take entire ships with them. The fact that Captain Scott (the fasted-promoted Captain in Starfleet history) was able to infiltrate Walker’s circle for the brainlice shows that suspicion does not come naturally to these people. I imagine that’s what happens when one is raised in a utopia. 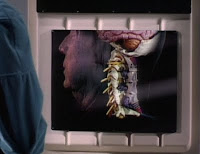 Brainlice: The brainlice have a stupider issue, namely that they are the villains and therefore need to become less effective the closer the plot comes to resolution. These are creatures who have managed to place themselves within the upper echelons and rearrange large numbers of personnel without any outcry. They’re aware of their enemies and have successfully infiltrated the resistance, using it to deliver their enemies to them. Basically the brainlice are the new leaders, all hail the brainlice!
Except that the Enterprise comes to town, brimming plot-power, and from that point on the brainlice become idiots. It may be largely down to the Quinn-louse, who seems indiscreet and gets violent when faced with questions, even fairly innocuous ones. Since we know Quinn was compromised after Coming of Age, we could assume the Quinn-louse is a bit new to all this. Of course all the information uncovered by Crusher would still have come to nought if the brainlice had better security arrangements.
Like bees** it seems that once something is inside the hive the brainlice assume it’s harmless. They aren’t concerned about Picard and they think Riker is one of their own, even so there seems to be a distinct lack of guards or surveillance. Beverly is able to contact Picard while he's there and tell him all about what's going on and no one monitors the communication. Once the shooting starts, Picard and Riker are able to take out 4 of them a bit too quickly and easily. A louse leads them straight to Remmick, though it’s possible it can’t last long outside a host, so fair enough. Remmick makes sense as a host for the mother-thing, he’s less high-profile than the Admirals. However you’d think the mother-host would be kept out of the way, posted to a secure and guarded room, able to call many guards at the touch of a button. Apparently not. Though perhaps this was only meant to be a scouting party, a small detachment to soften the place up. Perhaps the homing beacon was the most important thing? It’d explain why the Remmick-thing didn’t seem worried about being cornered.

Staff Meetings: 4
1. Picard is told about conspiracy in Starfleet Command by Walker and 2 other Captains on the abandoned mining planet.***
2. Picard discusses what he was told with Troi, she thinks Walker was unreasonable.
3. Picard tells Riker about the conspiracy. 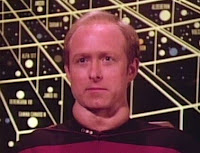 4. Data tells Picard and Riker what he has discovered.

Death by Space Misadventure
The entire crew of Walker’s ship, the Horatio, die in an explosion so bad there are no bodies.
2 Admirals, 1 Captain, an unnamed yellowshirt and Remmick are shot by Picard and Riker.

The End
Riker explains the fake neck spike was Crusher’s idea, it had to fool everyone. They’re back on the Enterprise, so presumably aren’t being held over all the shooting. Data says he’s discovered what Remmick was sending. It was a homing beacon, sent from Earth to an unexplored sector. The episode ends on an ominous note. 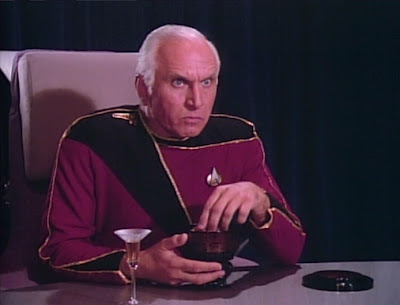 * I’m sure you’ll be surprised to hear that Pacifica is an ocean world.
** I think it’s bees, I could be wrong.
*** Fred, Daphne, Velma, Scooby and Shaggy are due, but the Mystery Machine has issues travelling between star systems.