When the Bough Breaks

Episode: s1, ep 17
A episode that tries to establish a sense of wonder early on, looks like it's going to do something interesting, then realises it's a TNG episode so ends up having meetings, moral dilemmas and a lesson.

What Happens
Riker is going to the Bridge when a child runs into him in the corridor and... wait a minute.
There hasn't been a Captain's log. I haven't been told what stardate it is. The Enterprise could be anywhere, ANYWHERE! How will I know what is going on unless Picard tells me in a voice over at the start of the episode?


Ahem... Riker is called to the bridge where he infodumps about the mythical hidden planet of Aldea. Worf notices a distortion on the viewscreen, Troi senses thousands of minds, and then (surprise, surprise) they find the hidden mythical planet of Aldea - that was a tense half a minute. The Aldeans appear on the bridge and invite an away team to discuss a deal, then Riker, Troi and Dr Crusher are magicked off the ship. It turns out that despite their leisurely, art-filled lives the Aldeans are infertile and they want some children. They propose exchanging children for tech and knowledge, Crusher is angered by this and Troi points out that humans are very attached to their offspring (like in a weird way).* A yellow beam scans the whole ship, and locks onto Wesley for a moment, then he and 6 other children are magicked away. Picard is angry about this, but has to keep the Aldeans talking because if they cloak their planet again the Enterprise might never find it. The planet's shield means that transporters and weapons won't work, and it's almost impossible to get around.

The children who have been taken to Aldea are treated with kindness and attention. Wesley is seen as the leader, presumably because he's the oldest. He argues reasonably to be allowed back home and is shocked by the Aldean's complete reliance on tech that they don't understand anymore. He uses their systems to keep an eye on the other children, who are being taught music and art and aren't complaining about the abduction, though apparently they do miss their parents. 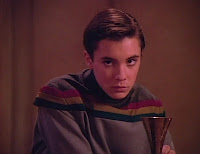 On a negotiation visit with Picard, Beverly is allowed to see Wesley and from him gains information about the Aldeans. It seems that the shield that protects them has stripped away their ozone layer and they've being slowly succumbing to radiation sickness, which has caused their infertility.** Wesley sneaks into the other children's rooms and organises a night-time meeting to lecture them about passive resistance, this is probably why he isn't invited to parties.
The Aldeans don't like the silent treatment and ask Picard to deal with it (seriously, they ask the people they stole the kids from to help them with discipline). Data and Riker secretly beam to the power source as Data managed to get through a fluctuation in the shield, and shut it down. The Aldeans are told that their tech has been poisoning them and the same thing will happen to the children if they stay. The Aldean leader changes his attitude from suspicion to acceptance between scenes and the children are returned.


The Boy
Wesley is one of the children taken according to whatever criteria the Aldeans use. He’s immediately identified as the leader, probably because he’s the oldest by at least 3 years, and he’s the only child who can reach a high shelf. Wesley ingratiates himself by questioning things and being surprised by the Aldeans poor knowledge of tech (this is the first time he does a normal teen thing).
When it’s clear that –nice though they are- the Aldeans aren’t going to let them go home, Wesley uses the neglected tech that he has been given full access to (these people are unprepared for children) and secretly meets with the other kids. He encourages them to adopt a strategy of passive resistance, because that’s what kids do at sleepovers in the future?
Later he is able to pass some information to his mother, in a hand off so indiscreet you assume the Aldeans just aren’t paying attention. This helps Dr Crusher identify the cause of the Aldeans' infertility, and possibly also helps with the rescue somehow, maybe?

In Space No One Cares What You Feel
One of the mothers wants to know what’s going on and what is being done to get the children back. Beverly actually tells her to pipe down, though in a roughly encouraging way. The other parents remain quiet and rational, as one does when ones child has been abducted.***
(See also the children's reaction in Something Is Very Wrong)

No Magic Here
Aldea is so technologically advanced that it has become mythical. While it was hard for me to get very excited about the inevitable discovery of a hidden planet I’d known about for under half a minute, Lord knows the actors and the music did their best to create a sense of wonder, which I appreciate.
When the Aldeans first appeared it was clear to me that they had the role of Space Fey, and I got excited. However after abducting some children all the mystical and mysterious stuff was abandoned for a regular old TNG episode, which I found disappointing,
While I am a big fan of what Arthur C. Clarke said about technology and magic, as far as I can see TNG delights in undermining the magical side of things. Here is technology that is inexplicable and amazing, let us scan it and technobabble at it until all the mystery and wonder is gone.****
Something Is Very Wrong
As soon as the Aldeans appeared I assumed they were some kind of Space Fey and that children would disappear at some point in this episode. Also you don’t find a centuries-hidden, mythical tech planet unless they want you to.

What is up with these kids? Seriously. They’re taken away from home and family and they seem OK with it. As Star Fleet kids I guess they’re used to being sent places without consultation -and at least the natives of Aldea are kind and attentive- but still I’d expect tears or anger or fear, or some sort of child-like reaction.
When they decide to take action Wesley gives the other children a social history lecture. WTF? If you are a child and you want to deter kidnappers who are not used to children the answer is to behave like horrible, little brats.
This could include: crying; screaming; complaining; making a mess, throwing things; breaking stuff; asking ‘why’ a hundred times; refusing to sleep; arguing; moodiness; sarcasm; being very particular about tiny details that do not matter; proclaiming that everything is boring; acting superior for no good reason; running all over the place; going on and on about nonsense that grown ups do not understand…
These weirdly strait-laced kids do not try any of this, if they had the Aldeans would have sent them back sharpish.

How are 7 kids meant to be the future generation of a planet? Genetically it’s a horrible idea.


Space Trumpets
The music tries really hard to convey a sense of wonder from the beginning. Riker walking down a corridor is not particularly deserving of a soundtrack that wouldn't be out of place in Willy Wonka's chocolate factory. It works better with Riker's awed description of the mythical Aldea, but it's still hard for me to care much about the discovery of something I only found out about half a minute ago. Still I appreciate that the start of the episode tried to set a certain tone and it's a shame it wasn't followed through.

Staff Meetings: 2
1. Picard and Troi meet with the worried parents in the lounge to discuss what’s happening about the missing children.
2. Wesley gathers the other kidnapped children at night and explains passive resistance to them. Because when children are uncertain they often start emulating Gandhi.

Won’t Somebody Think of the Children?
I may have been quietly judging the parents on the Enterprise for taking their kids into space, but given what Beverly says I think that quiet judging was not enough.

Crusher (to other worried parents): Don't give in to fear. Now, we all knew what the risks were when we signed on, and that's the choice we made.

So presumably Star Fleet risk assessed for the possibility of crew member’s children being kidnapped by aliens. This means that each and every Star Fleet parent deemed this acceptable and decided not to leave their kids with relatives/guardians in the Federation utopia. Frankly in light of this information I feel that these parents should consider themselves lucky that their kids were taken by benevolent and loving aliens, instead of ones who use human children as food.

The End
The Enterprise restores Aldea’s ozone layer and Crusher has cured them, so they’ll be healthy and visible from now on. Wesley brings in the smallest child, who gives a very uncomfortable Picard a hug, leading to much sniggering on the bridge. It is pretty funny. 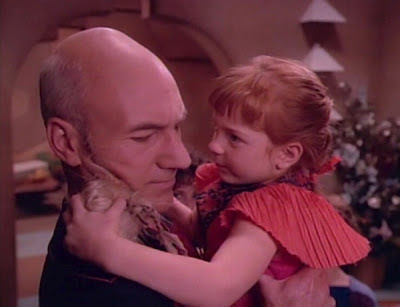 * I guess other races don't agree with dragging their kids with them on dangerous space missions. Weird humans.
** Is this about environmentalism? You know, I think this might be about environmentalism.
*** These people have the same parental reactions as Rory and Amy from Doctor Who
**** I appreciate that other people will see this differently, but this is my take on it. I suspect this is part of the reason why I generally prefer fantasy to hard science fiction.
Posted by Catherine Hill at 13:36