What Happens
While waiting for Picard to return from a conference* the Enterprise finds some centuries-old space transport from Earth. Data wants to look, and though no one else cares they let him go over with Worf (who probably doesn’t care either). They find cryogenic capsules, Data beams the three undamaged ones to sickbay. Picard returns and announces that they’re going to the neutral zone. Starbases in the area have been destroyed and the Federation fears the Romulans are involved. The Enterprise is being sent to investigate and re-establish relations. 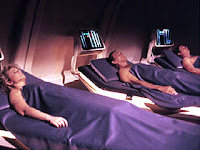 Beverly tells Picard about the frozen people, who she has revived. Each had died from what is now a minor medical complaint. Picard does not appreciate Data bringing strays aboard. Worf is called in for when they wake up (because he and Data are simply the best crew members to be present when people from the 20th Century wake up). One was a housewife who died suddenly, one a country music star who badly damaged his body through excess, and the third a businessman who had a heart problem. It has been 370 years since these people died, so there’s a lot to explain and get used to.
Troi info dumps about the Romulans who are distantly related to Vulcans, they’re arrogant,** curious and aggressive. They’re fascinated by humans, despite having no contact with them for 50 years. Worf can’t contact any Federation bases, they may have been destroyed. Riker thinks the Romulans did it to provoke confrontation. Later the bases turn out not to be destroyed, but have entirely vanished.
The businessman uses the comms to bother Picard and unfavourably compares the Enterprise to the QE2. He’s ignorant yet arrogant, but eventually apologises as not knowing what’s going on is hard for him. Picard sends Troi to comfort the distraught woman and tells them not to get in the way of the ship’s business. The woman misses her family and didn’t ask for this. The country music guy is laid back and content to drink and see what happens next. The businessman can tell the crew are tense and wants to find out what’s going on. The ship goes to yellow alert as he wanders the corridors.
The Romulans have improved their cloaking device and seems to test the Enterprise. The Romulan ship de-cloaks, it’s massive. The businessman gets to the bridge and Riker orders security to remove him, but the Romulans respond to hails and everyone besides Picard freezes. Romulan outposts have also been attacked, but they see that the Federation doesn’t have the necessary capabilities. The businessman points out that the Romulans don’t know what’s going on; they’re hoping the Federation knows. Picard suggests a one-time collaboration to find out what’s happening. The Romulans warn that they don’t like the Federation’s expansion, but they’re back now. The 20th Century people start to see how they might live now and are sent back to Earth on another ship.


Picard likes old stuff
Instead of being fascinated to learn about history from people who were there, Picard is mostly irritated by Data’s strays. The businessman makes himself unpopular by acting like he’s very important and bothering Picard while he’s doing vital work. 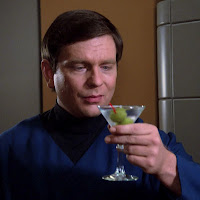 Does Not Compute
Data’s curiosity leads to these people being brought onboard and resurrected, otherwise they would have burned up in a star. Data seems to develop a relationship with the country singer. Each finds the other confusing, but their scenes are good ones with Data’s formality contrasted against the singer’s folksy familiarity. Plus the country singer seems wiser than the other two, he's happy to be alive and take advantage of what opportunities the situation brings, but is content to see what happens next and doesn't try to get involved in ship's business. 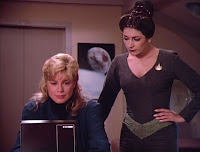 Troi helps the 20th Century woman to deal with loss, she never signed up for cryogenics and it’s a great shock to her. Using the computer Troi finds her descendants (who survived nuclear horror and various other Bad Things of the intervening centuries, as did their records).
The clueless, presumptuous 20th Century businessman manages to do Troi’s job in her absence by realising that the Romulans are bluffing to Picard. That’s right, the first time this guy has ever seen Romulans (and only the 2nd time he’s seen aliens) he’s able to tell what their motivation is better than any of the 24th Century natives on the Bridge. It’s not that the guy is empathic (in fact he seems fairly dismissive of feelings), but he is good at reading people. This suggests that emotional awareness is better in the 20th Century, which actually makes a lot of sense considering how restrained the characters seem to be. It also suggests that Troi's empathic, um, powers (I guess) aren't much to write home about.

Continuity
There’s been barely a whisper of Romulans for over 50 years. Everything the Federation knows is based on rumour and Troi has to research what they’re like.
Except that there was this in Angel One:
DATA: The border outpost reports a contingent of seven Romulan battlecruisers within sensor range. The USS Berlin has answered the distress call. However, should hostilities erupt, both the outpost and the starship will be out-gunned. It is felt that the Enterprise's presence in the area will be a vital show of force.
This isn’t part of the onscreen action and just seemed like a way od increasing the tension and putting a time limit on the action in the episode. Still I’m not sure that’s barely a whisper.

Security Breach
Again we see that anyone can wander about the ship. Apparently the comms panels are so simple someone from nearly 400 years ago can use them and they aren’t locked. Picard claims this is because crew know not to use them for frivolous purposes, does this include the kids? It seems like comms should be restricted or secured after Wesley’s little trick simulating Picard’s voice in the Naked Now
When the businessman gets onto the bridge, with ease, and Riker orders security to take him away the 2 security guys don't do that. They grab hold of him, but then the Romulan ship comes onscreen and they stop what they're supposed to be doing to watch. I appreciate it's very interesting, but they were just given a direct order and both of them are ignoring it and letting a stranger stand on the Bridge during a crisis. He's allowed to stay on the Bridge making comments and interrupting a vital communication until Picard has a moment to repeat Riker's earlier order. Now maybe these guys don't like Riker, but they shouldn't let it affect their work like this.

Staff Meetings: 1
Picard briefs the key staff about the destroyed starbases and the mission to contact the Roumlans.

Won’t Somebody Think of the Children?
The Enterprise is specifically sent to meet Romulans in what is hoped to be a diplomatic, but could be a military mission. Apparently Starfleet Command are fine with all the kids on board being put at risk on this dangerous mission. So perhaps Picard’s lack of concern is just following the party line.

The End
It felt as though the episode should have ended when the Romulan ship de-cloaked. Or after the talk with the Romulans, when there’s a mystery to be investigated with untrustworthy allies. Instead the drama is sucked out of the ending because the episode doesn’t seem to know which storyline is B-plot and carefully concludes all the stuff with the 20th Century people after the exciting bit. It's not as though they don't know how to do this, the previous episode had an ending that worked well.
The last scene is a discussion about how the 20th Century people will get back to Earth, which deflates all the tension previously built up. Picard has to try and make it sound exciting by saying something about going forward, but he isn’t given much to work with. 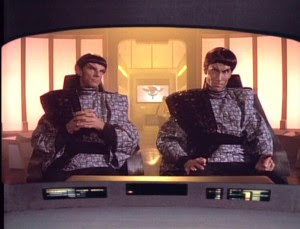 * Is it anything to do with brainlice or shooting Admirals?
** So just like Vulcans then.
Posted by Catherine Hill at 09:36