As this is the 25th anniversary month I'm going to be doing Next Gen episode posts more regularly throughout September, probably around three times a week.
My plan is to finish series 1 in the Anniversary week at the end of the month.


Episode: s1, ep 11
This is the first time we meet Lwaxana Troi, so the episode is amusing, and even the other stuff in the episode is fine, with the exception of Riker's moodiness.


What Happens
The Enterprise is orbiting relaxation planet Haven when a creepy talking box beams in with a message (and jewels) for Troi, it's time for her arranged marriage. Riker is unhappy about this but Deanna points out that his career is the most important thing to him. Apparently genetic matching is a Betazoid tradition, which doesn't explain why Troi is engaged to a human man, whose father was friends with her human father. In fact Troi's flamboyant mother, Lwaxana, is very disdainful of the repressed, human Millers, so the Betazoid side of all this is largely underrepresented. Wyatt Miller (Deanna's fiance) is a nice, young doctor and both he and Deanna are willing to see the arrangement through. Wyatt's dreams of a blonde woman he had assumed was Deanna are dismissed as a childish fantasy. There is a terribly awkward pre-wedding meal with sniping future in-laws and a grumpy ex, Deanna is unsurprisingly angered by all this.
Meanwhile a mysterious ship approaches Haven, ignoring all security measures. The Haven leader asks the Enterprise for defensive help. The ship turns out to be Tarrelian, a race thought to have been made extinct by illness. The disaster was self-inflicted by the foolish species getting into an arms race with biological weapons.* Tarrelians have a reputation for spreading their illness to other species and Haven is obviously concerned that the plague rats don't get onto the planet. Picard refuses to fire on the ship, even though it ignores all hails, and stops it with a tractor beam only at the very last moment. The Tarellians appear on the viewscreen and the woman from Wyatt's dreams is there.
The 8 people on the ship travelled to Haven hoping for a cure, or a hospice, but when they see Wyatt is real they are convinced he will heal them. Captain's daughter Arianna has been dreaming about him all her life. Wyatt is confused by this at first, but eventually he beams over to the Tarellian ship to be with Arianna and help heal her people. His parents are obviously distressed by this, they cannot see him again, but Deanna understands and wishes him well. 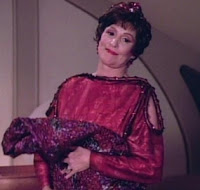 It's not clear whether all Betazed women are like this, or whether she's eccentric even for a her own species, it doesn't matter. She is the centre of every scene she's in with her effortless superiority, high-spirits and mischief.
She immediately treats Picard like a bellhop and I can see why the characters find her outspokenness annoying, but given how stuffy this show can be she's a refreshing and amusing change for the audience.

Armin Shimmerman is face of the creepy message box, which I totally didn't realise until the internet told me. My defence is that he doesn't pull those sorts of expressions in the other roles I've seen him in, plus it's a good makeup job. It's nothing to do with the fact that my facial recognition is so bad I've been confused by actors having different hair or playing camp roles.

Riker: lover, adventurer, middle-management
Riker becomes petulant about Deanna’s arranged marriage even though it’s clear that he put his career ahead of their relationship before, and apparently has no intention of actually winning her back now. Deanna is upfront about her history with Riker and Wyatt is very calm about it, even though Riker is much bigger than he is. After Wyatt is out of the picture Riker doesn’t try to get Deanna back, meaning all he does in this episode is empty posturing. In fact in the not-actually-a-love-triangle Riker comes off badly as he behaves like a sulky child. 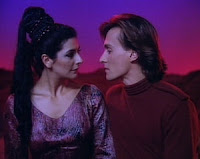 This is the first Troi-heavy episode. It’s a chance to see the Counsellor as more than the pretty lady who follows the Captain around and uses her extra (but far from impressive) powers to aid communication, or whatever it is she does.
Unfortunately the episode doesn’t exactly make her look good (this isn’t the Good Troi Episode). Character development is a positive. We see more of the compassionate, optimistic woman that everyone on the Enterprise seems to like, but to be frank I still can’t see why she’s a key officer or has a chair on the bridge.
I think a large part of the problem is that she is entirely overshadowed by her mother, then again so is everyone else. Lwaxana despairs of Deanna’s lack of telepathic ability - something that would be so useful for her job I’m surprised that Deanna doesn’t even try to master it. Much though Deanna goes on about human emotions being confusing to her (which now sounds like an excuse) it seems she isn’t much cop as a Betazoid either. Her lack of telepathic ability must make her seem like someone with learning difficulties to her mother’s people.

Awkward Moment
The entire pre-wedding dinner scene is so hilariously awkward. But it’s actually written that way (rather than being unintentionally awkward due to weird dialogue) making it a very successful scene.
Troi and Wyatt are trying to get to know one another and celebrate their upcoming wedding. Data circles the event ‘like a buzzard’ intrigued by the petty bickering. Riker grumps at the edge of the proceedings and leaves as soon as possible. Wyatt and Dr Crusher geek out about Tarellian plague and agree to consult each other about medical stuff. Lwaxana and Mrs Miller disagree about the ceremony and snipe at each other throughout, Lwaxana wins by scaring Mrs Miller with a plant-like ‘pet’ then pointing out that Mr Miller is attracted to her. Picard’s attempts at jocularity are ignored. Deanna eventually storms out.
Lwaxana’s companion, the tall, mute Mr Homn, gets drunk then bangs a gong repeatedly, lending an already awkward scene a disjointed and irritating rhythm. In the context it is a job well done.

Staff Meetings: 2
1. Troi talks to Picard about her arranged marriage
2. The crew discusses (and info-dumps about) the Tarellian situation.

No Magic Here
Haven is a planet famous for beauty and relaxation and with a reputation for mystical healing powers, though these are never tested in the episode.
Luxwana isn’t just empathic like her daughter (who is able to roughly tell when people are lying and what their emotions are, except for when it’s confusing, which seems to be most of the time) she’s a full telepath. She can communicate by thought, and knows what people are thinking, as well as their moods, though there isn’t much detail about how she experiences this or what limits her abilities.
Wyatt and Ariana have been dreaming about each other for years. Wyatt assumed she was Troi contacting him, then assumes she was a powerful dream or fantasy. When he discovers she’s real he asks Lwaxana to explain, and the answer seems to be the cosmic connectedness of all things. 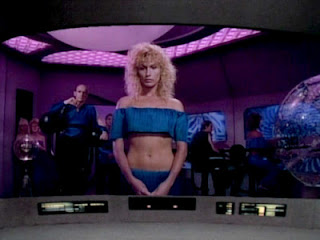 Tarrelians wear boob curtains. It’s an interesting choice.
They aren't just for the young either.
Death by Space Misadventure
All Tarellians except the 8 on this ship are dead, and at least 3 of these are related. So although they aren’t entirely extinct I’d say their species won’t last more than a generation.

The End
The Millers leave and Mr Miller graciously tells Deanna to keep the wedding gifts. Lwaxana leaves after pointing out that Picard is attracted to her and hitting on Riker. Picard (like a stereotypical Queen Victoria) is not amused. 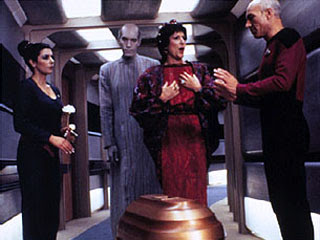