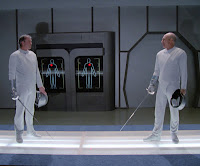 The Enterprise is going for shore leave and Picard has started early with a spot of fencing. A time distortion means the ship experiences a repeat of a few seconds. Picard goes to the Bridge in his fencing gear to find out what’s happening. A distress call comes in from a Professor Manheim, Picard knows he researches non-linear time and decides it’s not a coincidence. Troi senses that Picard had a strong reaction to the Professor’s name and offers him a session on the way, as he tends to repress his emotions. Unsurprisingly he refuses. Instead he goes to the holodeck and recreates a restaurant in Paris, 22 years previously. He tells the holo-waiter he was meant to meet someone before, but didn’t show up.
Reports say that the time hiccup was experienced by many others. The coordinates in the distress signal lead to a beacon, which leads to a planet. Picard hails a facility on the planet, but conspicuously doesn’t use his name. The woman who answers says there are only 2 of them left, the man is unconscious. The couple are beamed to sickbay where the Professor’s wife, Jenice, recognises Picard. Jenice says that the rest of the research team were killed in an accident. She describes her husband’s research; he believes time holds people in one dimension. He was close to proving his hypotheses, but didn’t tell her it would be dangerous, though there were many precautions in place.
Another temporal distortion means that Data, Riker and Picard see themselves in the turbolift. The Professor’s lab is protected so the away team can’t beam down, they’re almost lost in the process. The Professor wakes and says he’s between two dimensions. He opened a crack to another dimension and the time distortions will only get worse. He tells them how to get into his lab. Data thinks they can stop the Mannheim effect, but only by timing precisely with the distortions. Jenice asks Picard about why he didn’t show up that day, he says he was scared.
The Professor asks Picard to take care of Jenice if needed. Picard sends Data to the lab alone where he finds the time crack is a wibbly-wobbly thing. Data must drop some antimatter into it at precisely the right moment. Another time distortion means there’s 3 Datas, they talk to each other to figure out the middle one is at the right point in time. The antimatter goes into the time-crack and Data saves reality. The Professor recovers and has vibrant, indescribable images of other dimension. Despite what happened he is keen to get back to the lab, Jenice agrees. Troi takes Jenice to the holodeck where Picard shows her the recreation of that day and they say goodbye in holo-Paris. 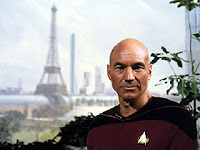 The main focus of this episode is Picard encountering a woman he let down in the past, not the temporal stuff which feels oddly like background.
After he hears the Professor’s name Picard knows he may see Jenice and instead of talking to Troi about it he goes to the holodeck for what he characterises as self-indulgence. Though how the holodeck knows exactly what he needs in the situation is beyond me.
It’s clear that Jean-Luc and Jenice were once in love, but Picard shipped out instead of meeting her in Paris. This is never categorised as a choice between love and career (which seems to be what happened with Riker and Troi). Picard knows he was scared of where his future would go, of not knowing what the right choice was. Jenice points out that he was sacred of being ordinary, which he cannot deny.

Does Not Compute
Data is able to examine the Professor’s research and tells him he understands it. The Professor is sceptical and says he doesn’t understand his own research. It seems what happened has disproved his research. Data says something about energy and the Professor is immediately convinced the android does understand.
Picard sends Data to the lab alone because he’s best able to handle time distortions. When they saw themselves in the turbo lift both Datas said they felt no disorientation. Data suggests that this is because he doesn’t experience time subjectively the way humans do. He only just now understands the expression, time flies when you’re having fun.

Doctor Doctor
Beverly can’t do much to help the Professor, she’s probably not had to deal with someone whose mind is between two dimensions before. I found it a bit bad that Beverly waits until Jenice is out of the room then tells Picard, Riker and Data that the Professor is dying. Shouldn’t she tell his wife first? 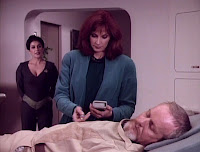 While Crusher is caring for the Professor Troi comes to talk to her. Crusher is initially frustrated she can’t wake the Professor, but Troi hasn’t come to talk about that. Beverly doesn’t want to talk about Picard and says that she can’t compete with a ghost from his past. Troi points out Jenice is real and Crusher says that Picard still sees the ghost, then gets back to work.
So Beverly does have feelings for Picard? I honestly wasn’t sure. It was strongly suggested in The Big Goodbye, but not mentioned at all since then. It would seem that Picard is oblivious and Beverly isn’t planning on making a move, meaning that this show is terrible at shipping its own characters.
It’s sad that Tasha never got to have any Girl Talk moments, not that this one passes the Bechdel test or anything.

Awkward Moment
On the holodeck Picard watches two holo-girls at a nearby table. One is waiting fruitlessly for a man, her friend chides her for it and leaves. The young women sees Picard watching her and talks to him. 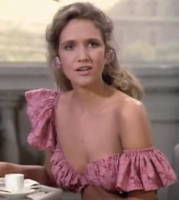 GABRIELLE: Do we know each other?
PICARD: No.
GABRIELLE: The way you look at me, do I remind you of someone?
PICARD: No. Yes, you do, somewhat.

Picard then suggests reasons why ‘he’ hasn’t come. This artificial little exchange is clearly meant to give Picard some kind of emotional release, but how the hell does the holodeck know that he needs this? Picard only gave it setting information.

Staff Meetings: 1
Picard, Riker and Data discuss how to stop what Data calls the Manheim Effect.

Death by Space Misadventure
All the other scientists and researchers on the Professor’s team.


The End
Picard returns to the Bridge and suggests they get back to that shore leave. Riker’s only been there once and remembers a club with blue concoctions. Troi remembers that it’s opposite a mens dancing club. Picard says it’s called the Blue Parrpt Café and tells Troi she’s buying. All is jovial and light-hearted now. 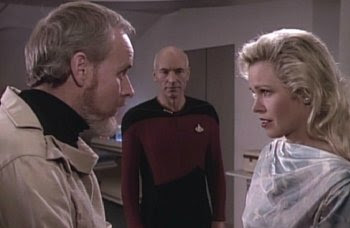