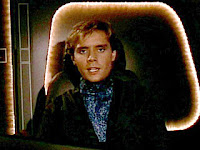 Wesley apologises to a kid called Jake because he beat him and won the chance to try out for the Academy. Jake is disappointed, but has no hard feelings and wishes Wesley well (kids in the future are weird). While Wesley is being assessed, Picard hosts an old Admiral friend who has bought an inspector with him. Inspector Remmick makes everyone on the bridge uncomfortable and Riker acts defensive and unprofessional when questioned, then complains to Picard about the situation. It's soon clear that Remmick is investigating Picard, and the crew don’t like it one bit. Picard behaves with dignity in the face of accusatory questions, while Riker gets snappish again. That Jake kid from earlier steals a shuttle and decides to join a freighter crew because he can’t face his father after failing (so that’s why the kids are like that). He loses control and will crash into the planet until Picard talks him through a dangerous manoeuvre and saves him. Though the shuttle stealing looks bad Remmick sees what Picard does to help the kid.
Wesley meets up with 3 others who are being assessed; a human-looking girl, a Vulcan girl, and a blue-headed alien man. The human girl talks to Wesley in a way that is self-deprecating and sickening. Wesley is more impressed by blue-head, who invented something Wesley is interested in, I don’t know. The tests mostly involve tapping consoles and looking at screens. Wesley returns to the Enterprise for breaktime, where he and Worf talk about the psych test. At the assessment centre Wesley saves an injured man from a burst pipe, but fails to talk someone else out of danger. It turns out this was all part of the test. In another test Wesley helps blue-head, who ends up beating him. 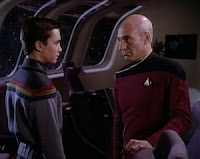 Picard goes to the Admiral and demands to know why he’s being investigated. Remmick gives his report and reveals that his hardass attitude was part of the job and he actually wants to serve under Picard. Apparently something vague is threatening the Federation and the Admiral was testing him. The Admiral wants to promote Picard and put him in charge of the Academy, to be a trusted influence over the young minds.

Wesley isn’t accepted, instead blue-head guy is the first of his kind to get into the Academy. Blue-head protests that Wesley helped him, but this has been taken into account. There is much graciousness and warmth and well-wishing.* Wesley is disappointed and has a heart-to-heart with Picard, who demands that he not get mopey. Picard tells the Admiral that he wants to stay with the Enterprise. 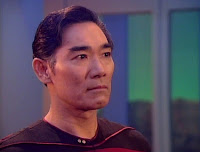 Guest Star
I knew straight away that the guy running the assessment centre was familiar. It wasn’t until halfway through the episode I suddenly realised… it’s Sam from Quincy! (Or actor Robert Ito.) The Star Fleet uniform threw me off, and the fact that he wasn’t following an aging pathologist around.
I always liked Sam in Quincy, even though it was painfully clear that he was kind of in love with Quincy. I thought this years before I discovered the concept of shipping

Oh Captain, my Captain
Picard handles Remmick well, and only gets angry about the investigation when talking to the Admiral. It turns out that despite all the questions the only problem with Picard's leadership is informality among the crew, which is due to a "feeling of family."*
At the end of the episode Picard has a heart-to-heart with Wesley and points out that failing to get into the Academy isn't so bad. Picard failed on his first try too, though he swears Wesley to secrecy. I would have thought information like that would be public knowledge, or at least accessible in Picard's files.

Riker: lover, adventurer, middle-management
Riker is a Commander, he should understand the function of the Inspector General’s office and that it is his duty to answer questions put to him by staff from that office.
Of course he doesn’t have to like it, but he should know to behave like a professional. Getting defensive, even on someone else’s behalf, does little good. In his meeting with Remmick there’s some definite alpha-male posturing over whether Riker will answer the questions. Remmick may reek of officialdom, but he stands his ground and keeps up his badass interrogator role. I’m sure when Riker has to investigate people he doesn’t appreciate this kind of attitude either.

The Boy
This is an episode full of people kissing Wesley’s arse and it is sickening. Wesley is brave, and smart, and understanding of other cultures, and helps others despite being in competition, and blah blah blah. The fact that all this Mary-Sueishness is not enough to get him his Dream is of no consolation as it means the damn kid is going to keep hanging around. 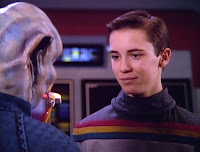 In the first scene Wesley apologises to another boy for doing better than him, but disappointed Jake wishes him well anyway. Then Wesley calls his mum Doctor, which seems a bit lame.
At the assessment centre the human girl knows who Wesley is as she’s heard there’ll be “a very smart, very young man who'd be tough competition”.* Then she points out that he has an advantage as he’s got practical starship experience. This makes it clear that letting children actually work on the ship is weird. A Vulcan girl puts Wesley in his place by saying he looks too young, this is one of the few times I’m actually glad when a Vulcan is smug at someone. Later the human girl tells Wesley “It's a good thing you're cute, Wesley, or you could really be obnoxious."*
The hidden tests at the assessment centre are so obviously tests that I wonder how smart any of these kids can be that they are fooled by them. Despite having access to holodeck tech they use acting, props and special effects to administer the pysch test, it all seems a bit low tech.
We learn a bit about Wesley’s background, in this episode. It seems he fears being unable to make tough decisions because such a tough decision (which Remmick insinuates was made by Picard) was the cause of his father’s death. However when it comes down to it he is, of course, able to make a decision.


Klingon Warrior
Worf and Wesley have a conversation in the holodeck about the psych test, which is what worries Wesley the most. This may be the longest conversation Worf has had so far. He gives Wesley sound advice and points out that "only fools have no fear". Worf reveals that he has difficulty relying on others, even now. It shows Worf is more than that grumpy Klingon.

Management Technique
Remmick has many questions about Picard’s actions. Especially regarding security. This makes sense. Except it turns out the investigation is politically motivated and Picard has done nothing wrong. I’m not sure that’s true, the stuff Remmick asked about should cause legitimate concern.

Continuity
The Admiral has put Picard through all this because he was testing him. He needs people he can trust because “Something or someone is trying to destroy the fabric of everything we've built up in the last two hundred years.” It seems there’s a threat or conspiracy, but Admiral can’t go into details. He doesn’t know if the threat is internal or external, but he’s gathering people to his side. Then later Admiral suggests he’s exaggerated the whole thing
This feels like the set up for something, but I get the impression it isn't followed through in TNG. Picard is worried and dismisses it as politics, maybe that's all it is. Still I can't help thinking of some of the Federation's dodgier moves in DS9 and wondering which side the Admiral and his chosen officers are/will be on.. 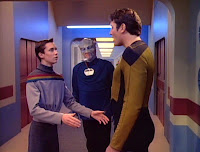 A bigger, older boy is rude to Wesley in the corridor at the assessment centre. He is immediately obnoxious and at first Wesley goes all humble and apologetic. The giant lad becomes enraged and Wesley starts shouting at him, which makes the guy smile and call him friend. My first reaction to this highly contrived little scene was WTF?
Then Sam-from-Quincy explains it was a test in cultural understanding. Wesley noticed the big lug had webbed fingers meaning he’s from a civilisation that hates politeness and responds positively to anger. Blue-head witnesses this and praises Wesley on his superior understanding*
It's not quite as sickening as when that girl called Wesley cute, but it just feels like another heavy-handed way of showing why Wesley is so great.


Something Is Very Wrong
That Jake kid steals a shuttle in order to run away to the freighters (which I’m guessing is the future equivalent of the merchant navy, rather than the circus). He loses control and is going to fatally crash into the planet. They can’t tractor beam the shuttle because it’s out of range. They can’t beam him to safety because he’s out of transporter range too, even though Wesley was beamed down onto the planet earlier in the episode.
So transporters can beam people onto the surface of a planet, but someone in a ship above the planet is out of range? Really? 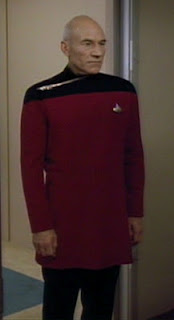 Staff Meetings: 8
1. Remmick questions Riker in Picard’s ready room.
2. Remmick questions Geordi in Engineering about the events of Where No One Has Gone Before.
3. Remmick questions Troi about Picard’s mental state, especially considering the events of The Battle.
4. Remmick asks Data to help him find a hidden problem on the ship and suggests Picard is not what he seems. Data says Remmick is wrong.
5. Worf is questioned about security and accidental contaminant (I think this might be a reference to Lonely Among Us).
6. Remmick questins Crusher about her relationship with Picard and suggests Picard was responsible for Pa Crusher’s death.
7. Remmick asks Picard about violating the Prime Directive in Justice (so someone did notice that).
8. Picard demands to know what’s going on and the Admiral lets him hear Remmick’s report.  Then the Admiral tells Picard about a conspiracy and offers him a promotion.

The End
The Admiral leaves, resigned to the fact that Picard will stay on the Enterprise. He says that he’s probably seeing conspiracies everywhere, but he would say that wouldn’t he. Wesley is driving the ship and Picard encouragingly tells him to engage. It is a touching moment that makes me roll my eyes.